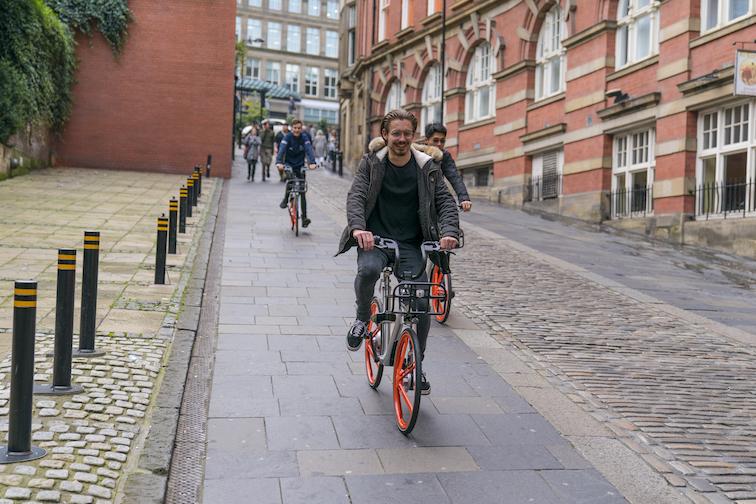 1,000 bikes to arrive at the start of October with more to follow
by Alex Bowden

Dockless bike-share firm Mobike has announced that Newcastle is to become its third UK city. The first thousand bikes will arrive in early October and the firm says that number will most likely increase once it has more data about local demand.

Mobike launched in Manchester in June and has also begun operating in parts of London. It will be Newcastle’s first shared bike scheme.

Steve Pyer, UK General Manager for Mobike, said: “We are once again launching in a city where there is a real commitment to get people on bikes. Newcastle’s commitment to creating a safe and inclusive cycling culture made the city a natural place for the next step of Mobike’s UK expansion.

“We look forward to welcoming the Newcastle people to our growing Mobiker base, and to working with them and the city to take advantage of all of the scheme’s benefits. As Mobike continues to become available across the UK, our commitment to increase the amount of people making a healthier, eco-friendly transport choice has never been stronger.”

Mobike has occasionally experienced teething problems where residents have been unfamiliar with its dockless system and the firm says it will be working with local councils to try and ensure a smooth launch.

Councillor Arlene Ainsley, Cabinet Member for Transport and Air Quality at Newcastle City Council said: “We are delighted to welcome Mobike to Newcastle. This is an innovative and exciting scheme, which has a proven track record, not only in Manchester and London but in cities around the world.

“By making bikes available and ready for use in a range of locations in the city, this initiative will bring new opportunities for more people to cycle, helping to reduce car journeys, which contribute to congestion and poor air quality.

“If we are to achieve real improvements in our city, in terms of making travel easier, safer and less polluting, then we need people to think about how they travel and, where possible, choose alternatives to the car. We believe that the launch of Mobike in Newcastle will enable more people to make that choice.”