Rosie Mai Iredale’s journey will begin with a ride from Bristol to Brighton, departing on Monday 21st August, before a planned cycle around the UK and across the USA in 2018.
by Jack Sexty

The 2m tall, 90kg gold piggy bank will be attached to Rosie’s bike on a trailer, and the challenge is part of her wider goal to raise £200,000 to build a non-profit children’s home.

Riding will begin with a trip from Bristol to Brighton and back on Monday 21st August, which will take approximately 10 days, before numerous smaller journeys around the UK, a potential Land's End to John o' Groats ride before eventually taking the pig to America in 2018, riding across the entire country; which will likely take six months or more.

The Bristol to Brighton trip is primarily a test of the water for the bigger challenges ahead, and with issues such as hills, suitable roads (the pig won't be allowed on cycle paths) and punctures to deal with, the determined fundraiser admits the first ride will be a learning curve: “I’m kind of winging it at the moment but have done some initial testing up hills. I've got people to help me build the piggy bank and offer advice, but while I’m out there my support crew will be the general public!" 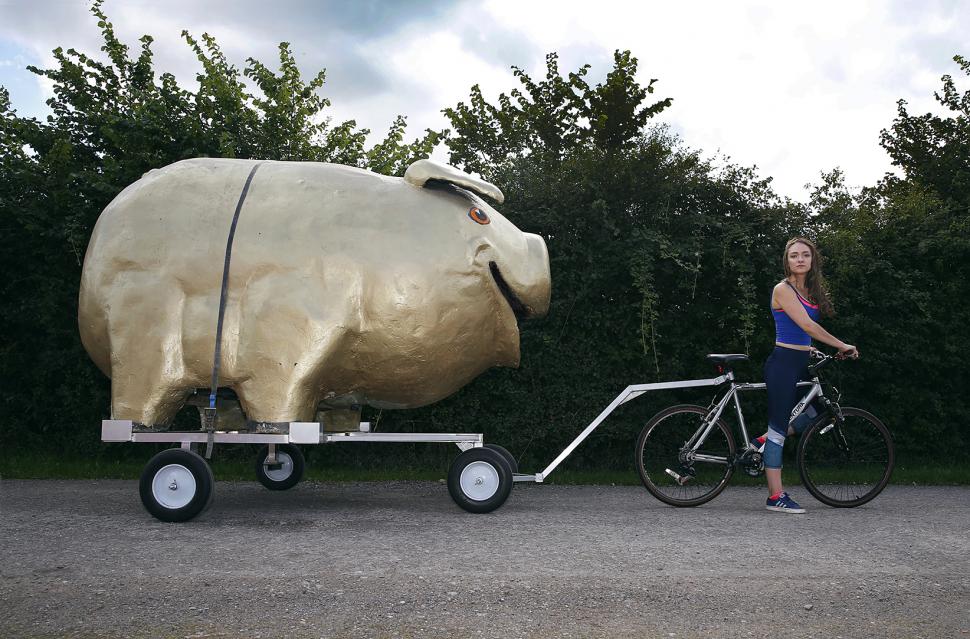 Logistical issues such as hills, road suitability and equipment are a work in progress, according to the Bristol-based fundraiser

Rosie made headlines in 2015 after pushing a bed modified with wheels from Lands End to John O' Groats while sleeping in it each night, a feat which took over three months. The bed was transported to the start point of the challenge by Pall-Ex, the haulage company owned by Dragon's Den star Hillary Davey, and Rosie is hoping to book her bike and giant pig onto a container to get it to America: "I’m hoping to get in touch with a freight company to see if I can get the pig shipped over, but will also look into the possibility of getting another one built over there.”

The support worker is studying for a Level 5 qualification in children's home management in preparation to fulfil her dream, and plans to take a career break in order to complete her journey across the US next year. You can visit Rosie's Full Reach Children's Projects website, Facebook and Twitter pages to find out more info and donate to the cause.