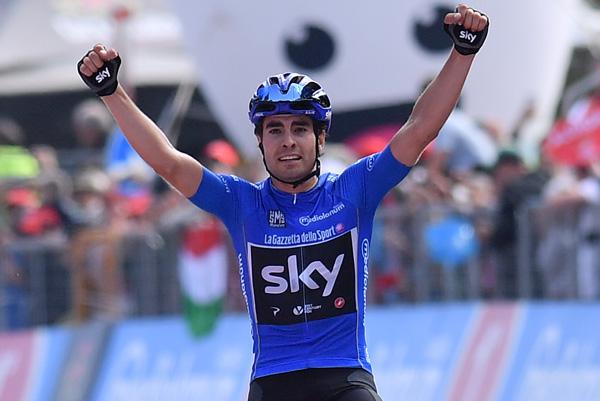 Mikel Landa, who finished fourth overall at the Tour de France last month and in May took the mountains classification at the Giro d'Italia, is moving from Team Sky to Movistar on a two-year contract commencing 1 January 2018.

With Nairo Quintana looking set to stay with Movistar for next season despite reports of the Colombian being unsettled there, and Alejandro Valverde approaching the end of his career, the switch will give the Spanish UCI WorldTour team another option in Grand Tour leadership as the Basque rider moves into what are likely to be the prime years of his career.

The news was confirmed in a statement today from Movistar, which has hailed the 27-year-old as Spain's rising star in three-week stage races.

Landa won the mountains jersey at May's Giro d'Italia, having started the race as Team Sky's co-leader alongside Geraint Thomas. but lost time after crashing in the same incident that led to the Welshman departing the race a few days later, ruling him out of contention for the general classification.

At the Tour de France, he was Chris Froome's strongest domestique, finishing fourth overall, but Landa seemed frustrated at having to play a supporting role with tensions apearing particularly high after Stage 12 to Peyragudes when his team leader and eventual overall winner cracked on the short but tough final ascent to Peyragudes in the Pyrenees.

He was pipped to a place on the podium by just one second by AG2R-La Mondiale rider, Romain Bardet who dug deep to hold off Landa's challenge on the penultimate day's individual time trial in Marseille.

Movistar general manager Eusebio Unzué said: “It's great news for us. Being still a young rider and with everything that's he's shown, he should be the rider who leads Spanish cycling for the next few years."

A past stage winner at both the Giro d'Italia and Vuelta, Landa last week took the overall, points and mountains jerseys at the five-day Spanish stage race, the Vuelta a Burgos, and last year won the overall at the Giro del Trentino.

He joined Team Sky at the start of the 2016 season after spending the previous two seasons with Astana, moving to the Kazakh outfit after his former Euskaltel-Euskadi team folded in late 2013.