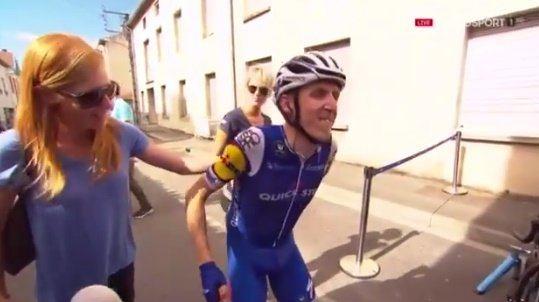 Dan Martin getting off his bike (via YouTube).jpg

Will skip Clasica San Sebastian to recover
by Alex Bowden

The legs are there – but the spine? Well, unfortunately that’s not at its best right now. Dan Martin has been forced to skip Clasica San Sebastian after discovering that he rode much of the Tour de France with two fractured vertebrae.

"During the Tour I didn't have any problems when racing, but off the bike I wasn't feeling very comfortable, so this week I did a scan and got the news,” explained Martin.

That ‘off the bike’ assessment is something of an understatement as footage of him from during the race showed.

What a hero! @DanMartin86 showing the physical and mental strength you need to be a cyclist! pic.twitter.com/D92tW44i1e

According to a statement from his Quick Step Floors team, a medical examination revealed two small transverse process fracture to the L2 and L3 vertebrae, meaning Martin will be sidelined for the next three weeks.

The Irishman was memorably waylaid by the horror crash that ended Richie Porte’s Tour de France on stage nine, but picked up his bike and rode on.

He later told The Guardian that the incident had left him unable to climb out of the saddle: “In the crash I hit so hard against the bank that all the muscles went into spasm. On the bike there was no pain, none sleeping or standing up. It was just when I had to bend my back the muscles hurt.

“You don’t need to straighten your back on the bike. No problem. [But] I wasn’t able to get out of the saddle. I could sprint, but I couldn’t climb out of the saddle because of the hip angle. That was the biggest challenge.”

Despite the pain and restrictions, Martin still managed to finish sixth – his highest finish in a Grand Tour.

Speaking about skipping Clasica San Sebastian this weekend, he said: “It's a real pity I won't ride San Sebastian, because the legs were there and it's a race I like.

“But fortunately this injury isn't something to worry about. In order to tackle my future goals in good condition, it's better to take a break and give the fracture time to heal. There's nothing else I can do, just rest and then build up for the final part of the season.”