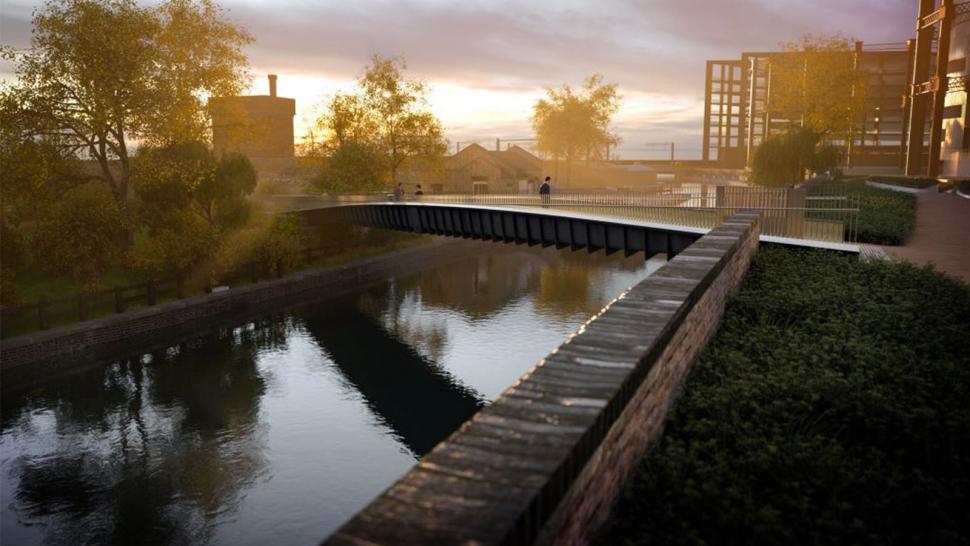 A new bridge for bike riders and pedestrians has opened across the Regent’s Canal in London’s King’s Cross – and could eventually link to a proposed aerial cycling and walking route to Camden along a disused railway line, which has launched a crowdfunding drive to proceed to its next phase.

The Somers Town Bridge links Camley Street on the south of the canal with new developments including Gasholder Gardens and Granary Square on the north side as the area north of King’s Cross station continues its transformation.

Ultimately, the bridge could provide a link from the area to Camden Town through the proposed Camden Highline, an aerial park and pedestrian and cycling route based on disused railway infrastructure that would run from Camden Gardens next to the Hawley Wharf redevelopment to Camley Street north of the canal, giving access to the Somers Town Bridge.

At the end of June, business improvement district Camden Town Unlimited, which brings together local businesses and other organisations, launched a crowdfunding drive on Spacehive to take the project to its next stage – and it’s already two thirds of the way to hitting its £37,743 target.

On the project page, Camden Town Unlimited says: “We need to show the people that matter, that this is a project that Camden really wants to make happen, and we can’t do this on our own!

“We’re carrying out this crowdfunding campaign to take the project to the next stage.

“This means carrying out more detailed feasibility work, which includes understanding the existing condition of the infrastructure including site appraisals and surveys.

“The campaign will also help pay for exhibitions, events and workshops that will guide the project.”

While there is already a popular cycling route between Camden and King’s Cross in the shape of the Regent’s Canal towpath, at peak periods it can be very crowded with cyclists and pedestrians, while it can also be tricky to pass under bridges on two wheels.

While the Camden Highline would be a shared space, it should provide a more suitable link for people on bikes.

Running for almost a kilometre, it would be 18 metres wide and eight metres above the ground, crossing eight roads using seven bridges, and since early last year discussions have been held with Network Rail about the technical feasibility of using the infrastructure.

Camden Town Unlimited chief executive Simon Pitkeathley commented: “People in Camden have been talking about this for years. Now we’re putting our money where our mouth is to make this happen.

“We invite anyone who wants to see a New York-style Highline here in London, whether you live and work in Camden or are a visitor to the area, to donate what you can to help make this idea a reality.”

The campaign will run for another two and a half months or until the target is reached, whichever is sooner.

As we reported in May, the Camden Highline was originally conceived by Oliver O’Brien, a research assistant at the Centre for Advanced Spatial Analysis at University College London.

His concept was picked up by North London website Kentishtowner.co.uk which, based on the support its readers gave the plans, approached Pitkeathley to bring Camden Town Unlimited on board, which then commissioned the design.

Last month we reported how another piece of cycling and walking infrastructure planned for London was also seeking funding through Spacehive to enable the project to be taken forward.

To date, the fundrasing drive for the proposed bridge spanning the Thames from Brentford to Kew has raised just £4,500 of a £166,224 target.