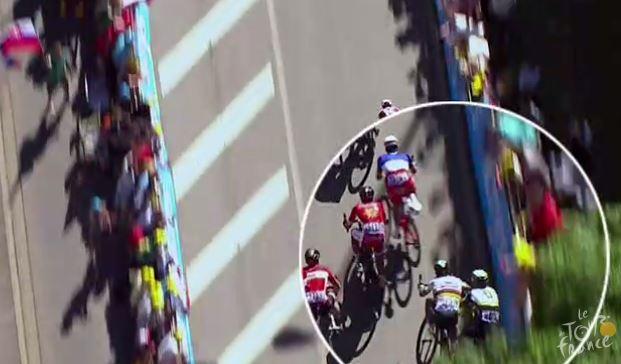 Peter Sagan says he accepts the decision of the race jury to disqualify him from the Tour de France - although he added that he disagrees with it. The Slovak rider was thrown out of the race after he was adjudged to have endangered other riders during the sprint at the end of yesterday's Stage 4, with Dimension Data's Mark Cavendish sustaining a fractured right scapula, meaning he will miss the rest of the race.

Speaking to the press outside his Bora-Hansgrohe team's hotel, world champion Sagan said: "What can I do? I can just accept the decision of the jury but for sure I don’t agree with them because I think I didn’t do something wrong in the sprint.

"What is bad is that Mark fell down and it’s important that he can recover well. I’m sorry for that. As you see can see on the internet, it was a crazy sprint. It is not the first one like that and won’t be the last one like that. So I wish to Mark to recover well and that’s it," added Sagan, who went straight to Dimension Data's team bus to apologise to Cavendish after the stage.

UCI World Champion, Peter Sagan addresses the press and makes a statement on his expulsion from the Tour de France! pic.twitter.com/NtIP5uHhXH

Speaking to ITV4 Cavendish, who missed much of the build-up to the Tour due to glandular fever, confirmed that he had suffered a fractured shoulder blade, but said: "At least I know I can carry out training on it, which is a bit better than if I was ill again.

He added: "I'm on the turbo trainer for the next few weeks, I can't put weight on it and if I crash, it's going to snap."

Mark Cavendish speaks after having to pull out of @LeTour due to injury! See the full interview on our programme on @ITV4 at midday! pic.twitter.com/HEmBZqLk4i

The departure from the race of two of cycling's biggest stars means that their respective pursuit of records at the race is on hold for another 12 months.

Sagan had been seeking a record equalling sixth green jersey - he has dominated the points competition for the past five years - while Cavendish remains on 30 stage wins, four short of Eddy Merckx's all-time record.