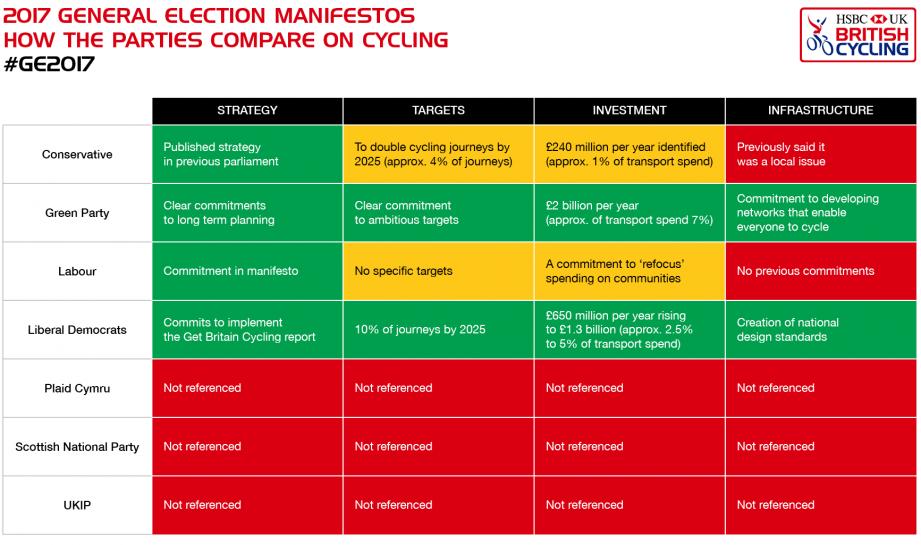 In what is perhaps to some degree a reflection of how low the bar has been set up until now, British Cycling policy advisor Chris Boardman says that the various parties’ manifestos represent ‘progress’ for cycling.

“The three political parties that have been in government all make commitments to everyday cycling in their manifestos," said Boardman.

"This represents progress from the last general election in 2015, and reflects what we at British Cycling already know – that demand from towns and cities across the country to prioritise cycling can no longer be ignored.”

Boardman did however go on to highlight the somewhat woolly nature of many of the positions taken.

“There is a long way to go. Commitments are still vague, investment still low, and there is not enough focus on building the infrastructure necessary to enable normal people to cycle to school or work which would benefit society as a whole. We have recommended that the next government commits at least five per cent of transport spend every year to delivering the infrastructure necessary to get Britain cycling."

Both the Conservatives and Labour say that they will implement the Cycling and Walking Investment Strategy (CWIS), which was published in April. However, neither commits to increased investment.

Five per cent of transport spend per year would equate to around £1.4bn in 2017 but as things stand, just £240m has been identified to be invested in walking and cycling.

The Liberal Democrats go further and say they would deliver the Get Britain Cycling recommendations made by the All-Party Parliamentary Cycling Group. These include investing £10 per head on cycling per year, rising to £20 per head. This equates to £650m rising to £1.3bn per year.

The Green Party says it would reprioritise transport investment and has identified £2bn per year from the roads fund which would be used to develop cycling networks.

There’s more detail about the cycling commitments that have been made in each of the manifestos over at British Cycling, while Peter Walker has rated them all out of ten on The Guardian’s Bike Blog.