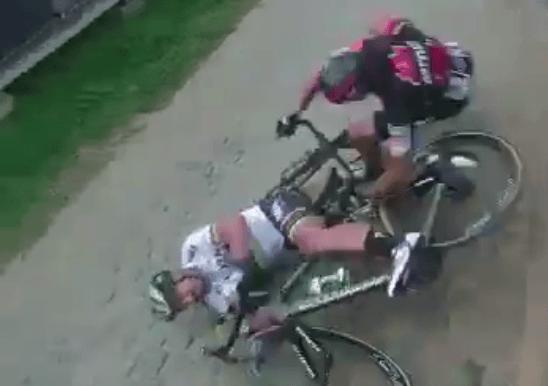 Here's the moment world champion Peter Sagan's defence of the Tour of Flanders title he won 12 months ago ended.

The Bora-Hansgrohe man, riding on the side of the road to avoid the worst of the cobbles, was pushing hard on the cobbled climb of the Oude Kwaremont to chase down eventual winner Philippe Gilbert of Quick Step Racing, when he seemed to crash against one of the barriers on the climb.

Immediate thoughts were that an advertising banner, a flag, or even a specator's jumper or jacket draped over it may have  got caught in Sagan's bike, but TV footage is inconclusive.

Looks like no flags were involved. Sagan too close to the barrier. #RVV pic.twitter.com/FYEhpDopeP

After watching frame by frame footage of the crash, though, the owner of a Twitter account dedicated to Sagan said they believed that a fan's jacket had indeed got caught on the Slovak rider's handelbars.

Crash of Peter Sagan played frame by frame. His handlebar hits the bue jacket on the barrier ! #RVV pic.twitter.com/HDbyeJV6qT

Overhead footage, though, shows the jacket getting caught in the rear wheel of the bike of AG2R-La Mondiale rider Oliver Naesen.

After the race, Sagan said: "The Tour of Flanders lived up to its reputation. It was a complicated race, but I felt I was in good form and in a position that would have allowed me to reach Gilbert in the final stretch.

"Unfortunately, my crash at the Oude Kwaremont meant it was all over and that was a pity because the team did a tremendous job to help me and keep me safe. I don’t know how I crashed but these things are a part of cycling.”

Video: Boonen given Viking Thunderclap send-off ahead of final Tour of Flanders

The crash also brought down Greg van Avermaet of BMC Racing, the in-form rider of this year's Classics season.

Afterwards, he said: "It's disappointing for me because I was going for the win but it didn't happen.

"But that's how racing is, you have high expectations and you try to achieve them. I did my best and I came second so it is like it is. It was just a little bit of bad luck but there are still more races to come."
"I think Peter Sagan was close to the barrier or the people and maybe he hit somebody on the side of the road and I was just behind so I couldn't avoid the crash. That was the moment when maybe we could have still done something with Peter and Olivier Naesen.

"We could have worked together but then you stop, you crash, and you lose another 30 seconds and then the race is over. If you see how close we still came at the finish I think the race was not over until that point."

"Gilbert was really strong and he went early. We were a bit behind and it was hard to work together with some guys and then I had to wait until I could get away and try and close the gap. Then it was still one minute so it was a bit too far. But maybe if the crash hadn't have happened it would have been a different story. Chapeau to Philippe."

1
Egan Bernal hospitalised after crash with parked bus while training in Colombia
2
"If you're a competent driver it shouldn't cause any issues": Cyclists react to Highway Code change outrage
3
Press misrepresents Highway Code changes – just days before they come into force
4
Expect carnage and more danger...Mr Loophole rants about Highway Code changes to talkRadio's Mike Graham
5
TV surgeon and cyclist killed after collision with motorist in Essex
6
Cyclist accused of punching delivery driver who “cut him up”
7
"Tired of road crime": CyclingMikey on episode 16 of the road.cc Podcast, plus how to make the most of your lunchbreak
8
Near Miss of the Day 701: Speeding bus driver “very lucky” to avoid prosecution for close pass (includes swearing)