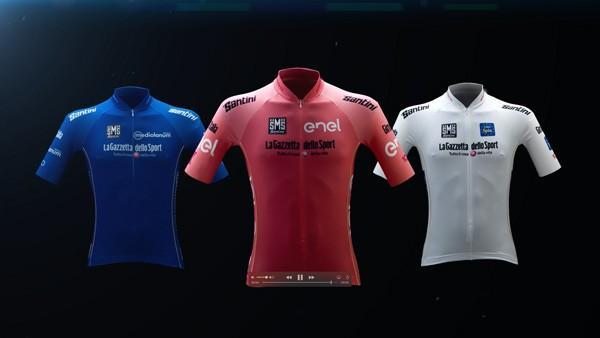 Italian Grand Tour starts on 5 May on Sardinia
by Simon_MacMichael

Organisers of the Giro d’Italia have unveiled the three of the four jerseys that riders will fight for the right to wear during this year’s 100th edition of the race, which starts on Sardinia on Friday 5 May.

Designed by Santini Maglificio Sportivo, the three jerseys that have had their designs made public are the maglia rosa, worn by the leader of the general classification, the maglia azzurra, sported by the rider at the head of the mountains classification, and the best young rider’s maglia Bianca.

The design of the fourth jersey, the maglia rossa, which is worn by the leader of the points classification, will be revealed in the coming days and according to race organisers RCS Sport will be accompanied by “a special surprise to celebrate this year historic edition of the Corsa Rosa.” Introduced to the Giro d’Italia in 1931 and taking its pink colour from the paper that the Gazzetta dello Sport, the newspaper that launched the race, is printed on, recent versions of the maglia rosa have been designed by the likes of Sir Paul Smith and Dolce & Gabbana.

Currently, it is sponsored by the Italy-based energy multinational, Enel, whose head of country for Italy, Carlo Tamburi, said: “The Giro d’Italia tells more than 100 years of the history of our country.

”The effort of the athletes riding their bikes demonstrates the passion, the sacrifice and the team spirit needed to finish each stage and maybe win it too.

“Enel shares the same spirit as the 100th edition of the Giro becoming even closer to the people, showcasing its activities and learning where to improve to best address its clients’ needs.

“We will follow the race to help tell the story of the great change happening in the world of energy, in particular around electric mobility, energy efficiency, Smart Technologies and a new shared vision of the future of energy in our country,” he added.