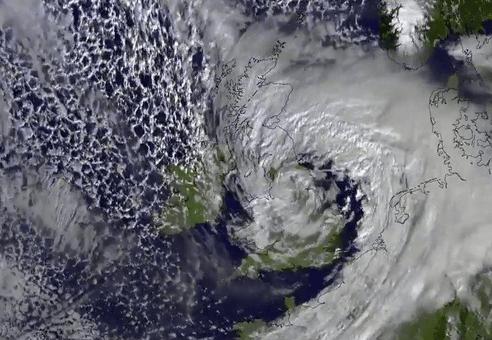 RAC urges drivers to give extra room to cyclists as storm batters UK; a day to leave your bike at work for the commute home?
by Simon_MacMichael

As Storm Doris batters the United Kingdom, police have revealed that a cyclist in Cornwall narrowly escaped being hit by a falling tree early this morning. Motorists across the country are being urged to give extra room to cyclists, but with gale force winds set to continue into the evening and overnight, it may be sensible for cycle commuters to leave the your bike at work for the journey home.

The A374 was closed for almost four hours between Antony and Shevlock in south-east Cornwall this morning after a tree was brought down by the wind at around 6.30am, reports the Plymouth Herald.

Police said that the tree "missed a cyclist by seconds" but crashed into a van that was following the rider. The van driver was trapped inside for two hours before being freed and taken to hospital with what were described as "superficial leg injuries."

The storm has already claimed one life, with a woman in Wolverhampton killed when she was struck by what is believed to have been a piece of a roof dislodged from a building.

"Be prepared to reduce your speed, allow plenty of room between your car and the vehicle in front and be wary of aquaplaning where water accumulates on the road.

"Be mindful that there will be strong gusts of wind, so ensure you have a good grip of the steering wheel and take extra care when overtaking high-sided vehicles and passing motorcyclists and cyclists who are susceptible to be buffeted and blown off course the wind.

"In extreme conditions it may be worth delaying your journey if possible until storm conditions pass, but it looks as though Storm Doris's impact will be relatively brief," he added.

Earlier today, the Met Office said that Storm Doris, which besides winds gusting in excess of 90 miles an hour in places is accompanied by heavy rain and in some areas snow, had evolved into what is known as a 'Weather Bomb' having undergone a process called 'explosive cyclogenesis'.

Chief meteorologist Eddy Carroll said: “Apart from the fact that some places over southern Scotland have had less snow than expected, storm Doris is behaving itself. It has undergone explosive cyclogenesis, and is giving damaging winds across parts of England and Wales.

"As Storm Doris moves eastwards over the North Sea later today the winds and snow will ease, but ice could be a hazard over parts of the north overnight.

“Friday will bring a welcome break from the unsettled conditions with some sunny spells for many and much calmer winds after a cold start with a risk of icy patches.”

> Cycling survival: road.cc's tips for riding on ice and snow

Battling a headwind is one thing, but if you've ever been hit side-on by a sudden and strong gust of wind when riding in conditions such as those today, you'll know how deeply unnerving an experience it can be, especially if riding in traffic. Debris such as branches that have fallen from trees into the road can also present an additional hazard.

It may therefore be worth checking conditions locally before setting off on your commute home and perhaps leaving your bike at work if you consider the conditions aren't worth the risk.