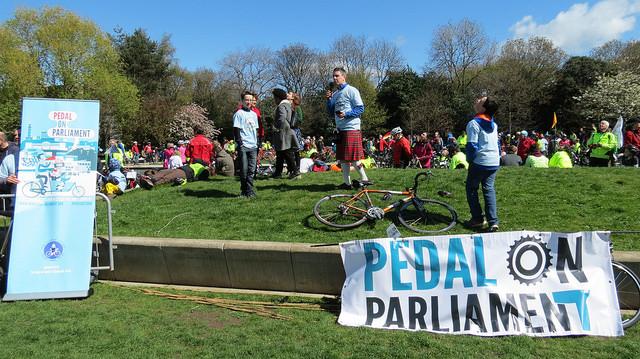 Pedal on Parliament will be biggest ever with rides in Edinburgh, Aberdeen and Glasgow

Pedal on Parliament will be bigger than ever this year, with rides planned in Edinburgh, Glasgow and Aberdeen.

With local elections right across Scotland this year, campaigners will be riding in Edinburgh, Glasgow and Aberdeen in 2017.

Dates for the events are 22nd April for Edinburgh and Aberdeen, and 23rd April for Glasgow.

The Pedal on Parliament organisers say: “Cycling should be the obvious solution for many of Scotland’s ills – as we have long said in our manifesto.

“Report after report after report has shown that cycling improves people’s health, cuts congestion, reduces pollution, boosts the economy, and generally provides returns on investment unparalleled by any other form of transport.

“But these benefits won’t come about just through a bit of training and encouragement. All the research shows that most people won’t cycle unless they have the conditions to do it in that are safe and, just as importantly, in which they feel safe – especially if they have a family.

“That takes real and sustained investment.

It can be done – but it takes political will.

“So far Scotland’s politicians have done the bare minimum to invest in cycling. We need you to come out and tell your elected representatives that’s not good enough.”

Pedal on Parliament’s demands include:

Last Spring we reported how record numbers of cyclists turned out for the annual event, with thousands of cyclists campaign for greater investment in active travel by taking part in mass bike rides across Edinburgh and Aberdeen.

The annual event was said by organisers to have been the biggest yet.

Participants were calling for 10 per cent of the Scottish Government’s transport budget to be invested in active travel. The Edinburgh part of the demonstration was led by the Fife Talking Tandems, a group that pairs visually-impaired stokers with sighted captains. Political party leaders Kezia Dugdale, Willie Rennie and Patrick Harvie also took part, along with Transport Minister Derek Mackay.

Speaking at the subsequent rally outside the Parliament building in Edinburgh, one of the organisers, Denise Marshall, said: “The funding increases we’ve seen are not enough – every day I experience close passes because people are human – we need to follow Sweden and introduce a goal of no deaths on the roads.”