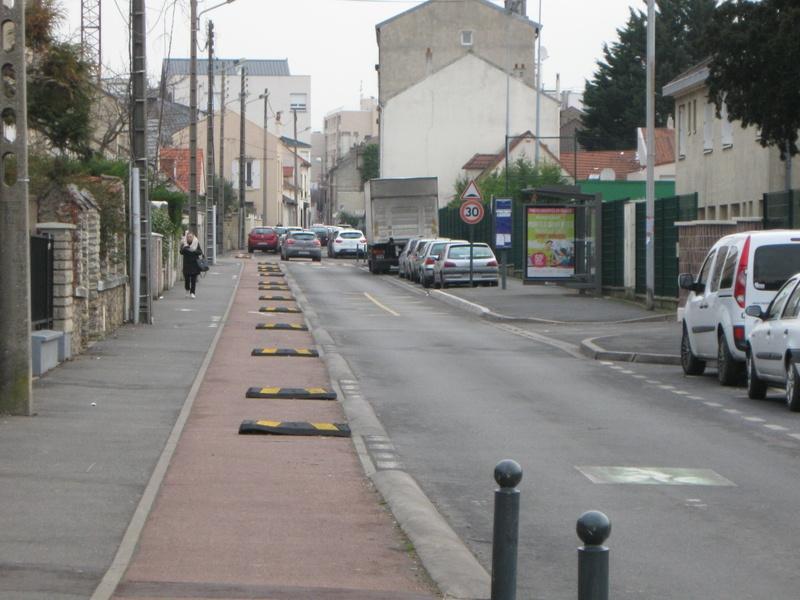 Cyclists near Paris are demanding that speed bumps installed on a cycle path in a suburb of the French capital be ripped up – although the local council says that they have been put there to protect bike riders from motorists.

Last week, a local blogger and cycling campaigner posted pictures online of the speed bumps, asking: “We all know the expression metter les batons dans les roues [to throw a spoke in the wheels].

“But we’ve just discovered an equally dangerous lunacy in Montmagny comprising bars fixed in place across a cycle path. We’re writing to the mayor to demand that he remedy this mess as soon as possible.”

The cycle path is on Rue Pelletier in Montmagny, Val d’Oise, around 5 kilometres north of central Paris.

The speed bumps, each 10 centimetres high, were put there in December, reports Le Parisien, because motorists would drive onto the cycle path especially when there was a bus stopped on the street.

Local resident, Valerie Leteignier, said that created danger not just for cyclists, but also for people living on the street itself.

"Some cars did not wait for the bus to leave and would pass on the cycle path and the pavement,” she said.

“It’s happened that my daughter, coming out of our house, has found herself face to face with a car and has been beeped!"

After a cyclist was run over by a driver on the cycle path, the local council decided to act.

The mayor of Montmagny, Patrick Floquet, said that the speed bumps had been installed in response to an “emergency” situation, and that a kerb to prevent vehicles encroaching on the cycle path will be put in place in the spring.

The temporary measures took some locals by surprise, though. Madame Leteignier said: "At a public meeting last year, the deputy mayor talked about setting up small studs but not such speed bumps. This condemns the cycle path.”

One cyclist who often rides down the street added: “It’s really weird. We can’t ride along it on the bike, so we’re forced to ride in the way of pedestrians, or otherwise on the road.”