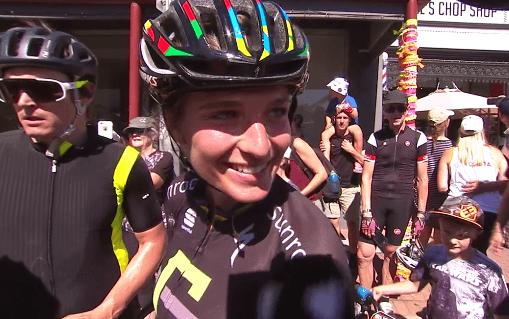 Mike Tomalaris, who has covered more than 20 editions of the Tour de France, gets caught out at Tour Down Under
by Simon_MacMichael

Live television can be full of pitfalls, and even the most experienced professionals can be caught out at times. So spare a thought for Mike Tomalaris of Australian channel SBS, who interviewed someone he thought was a Peter Sagan superfan … only to learn it was the world champion’s wife of a little over a year, Katarina.

It’s an understandable mistake for the veteran of more than 20 editions of the Tour de France to make.

Tomalaris spotted her before the start of Stage 1 of the Tour Down Under, wearing a jersey from Sagan’s own clothing line as well as a rainbow band-themed helmet.

And when he asked her where she was from and she replied “Slovakia,” he leapt to the logical conclusion that she must be someone from the central European country who has chosen to make her home in Australia.

The presenter asked her: “He’s a real hero huh?”

Smiling, she replied: “He is, for me especially.”

“You live in Australia?” was his next question, to which came the priceless reply, “No, I live with Peter.”

And all the while, her husband, in the rainbow jersey he retained last year in Doha, was standing a couple of feet away.

We should confess that we’ve been guilty of the opposite mistake here at road.cc.

Tomalaris may not have recognised Katarina – often photographed alongside Peter, with the couple effectively Slovakia’s answer to Posh and Becks – because she was in cycling kit, complete with helmet.

But away from the stars of the sport, it’s sometimes difficult to recognise pro cyclists when they’re in civvies, and that’s what happened to one road.cc hack at the presentation in Paris in autumn 2011 of the route of the following year’s Tour de France.

Waiting for the presentation to begin, we couldn’t get close to the likes of newly crowned world champion Mark Cavendish, surrounded by photographers.

Instead had a few words with a young guy looking forward to riding the race for the first time the following year.

And because we weren’t 100 per cent sure that the person we were speaking to was who we  thought it was, we had to ask his name.

“Peter Sagan, pleased to meet you” he replied.