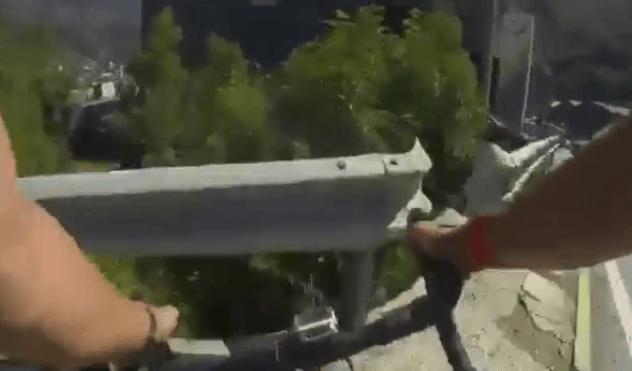 Video: Joaquim Rodriguez posts footage of spectacular crash - but it's not him

Retired pro's social media post sparks alarm among followers - but there are clues all is not as it seems...
by Simon_MacMichael

When you're posting footage of a spectacular crash to social media, it's probably not a bad idea to clarify whether or not you were the person riding, so as not to alarm your friends and followers.

Yesterday, retired pro Joaquim Rodriguez posted a video, apparently shot by a chest camera,  to Twitter and Instagram of a rider losing control on a descent and being thrown over a barrier.

In the text accompanying the video, Rodriquez says: "Behaviour of a cyclist when you crash! First, I'm fine, Second: How is my bike? Third: Sort out the handlebars and carry on."

Many people in the comments sent their best wishes to Rodriguez, nicknamed Purito, or remarked that he'd had a lucky escape.

Except, it isn't Rodriguez. For one thing, that doesn't look like Andorra, where he lives, in winter (granted, he could be elsewhere). Secondly, the two riders who stop to check on the condition of the person who has crashed are dressed for a triathlon, and have race numbers. Third, there's also a race number on the bike that crashed, and the set-up in terms of cabling, stem height, handlebars etc isn't what you'd expect from a pro.

Finally, the biggest clue of all is the bike itself - a Race Lite, formerly made by Merida, but at the opposite end of the Taiwanese company's range from the Scultura that Rodriguez should have been racing this season until he reconsidered his plans and confirmed his retirement. He has instead taken on a backroom role with the UCI WorldTour outift.