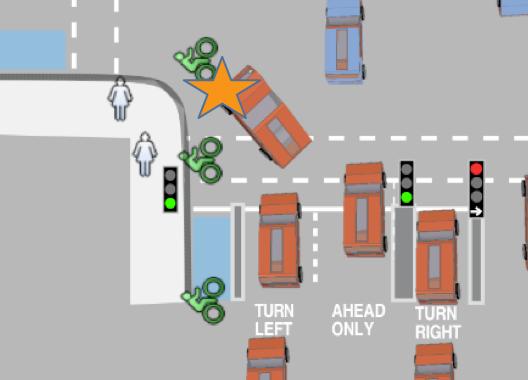 British Cycling’s infrastructure advisor says that the introduction of a universal rule to give way when turning at junctions would help address the issue whereby many cycle lanes are currently less convenient to use than the road.

British Cycling, the AA and pedestrian groups are calling for a universal rule to give way when turning to reduce the risk of cyclists and pedestrians falling victim to left hooks and have launched a petition to drum up support. Over 14,000 people have signed so far.

Transport planning consultant Adrian Lord says the reason why many cycle lanes disappear at junctions is because there is no clear rule on giving way, so engineers protect themselves by not providing anything at all.

“Designers already have various options to provide priority to pedestrians and cyclists crossing side roads using various give-way signs, crossings and other physical features such as speed humps depending on the exact circumstances.

“They are reluctant to deploy these however, for the simple reason that drivers may not ‘give way’ as intended. This is despite 14 separate existing Highway Code rules that are meant to deter drivers from overtaking, cutting in and running into pedestrians and cyclists crossing side road junctions.

“This simple change in the Highway Code would be the first step of embedding this custom in the UK and help to deliver better cycling infrastructure.”

Lord says that he spends a good deal of time riding on the road next to ‘cycling infrastructure’ but not on it. “Due to the deficiencies in the Highway Code, cycle lanes are frequently less convenient than using the main road so will often only ever be used by beginners,” he said.

He points out that many cycle lanes involve stopping at every side road and they often disappear at junctions just when cyclists need the most protection.

“It is estimated that the human effort required to stop moving and then start again on a bicycle is equivalent to adding on over 200m (almost a lap of Manchester Velodrome) to the journey. Stop at five side roads or more and you’ve added the equivalent of 1km and several minutes to a journey.”

Lord therefore concludes that a change in the wording of the Highway Code would help cut journey times for cyclists and deliver better cycling infrastructure.