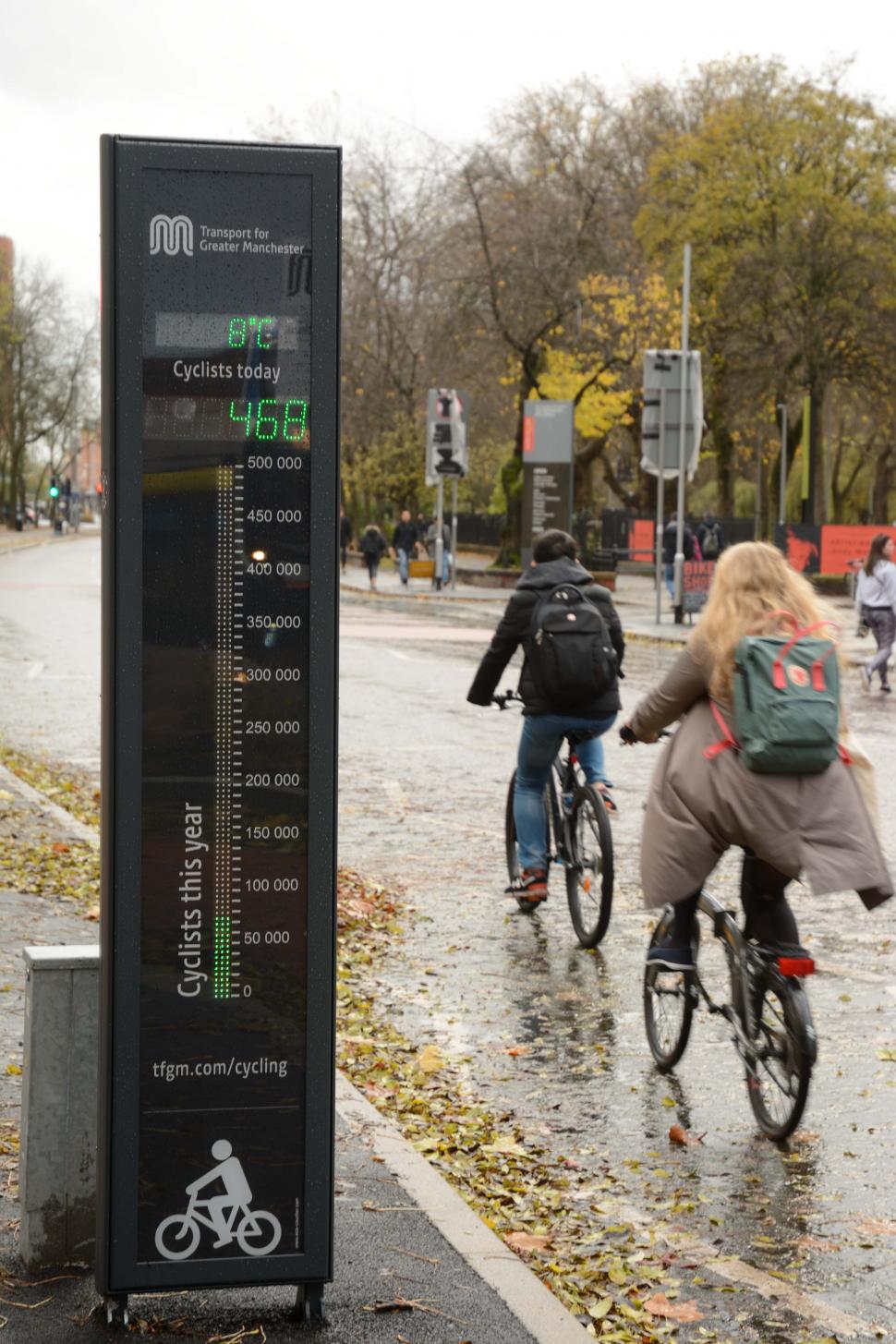 Digital cycle counters in Manchester have clocked up to 3,294 cyclists in a single day, following their installation last month.

The two cycle counters, which are the first of their kind in Manchester, have been installed on each side of Oxford Road, on new cycle tracks, with embedded sensors to detect passing cyclists.

The highest recorded reading, according to Eco Counter, was on 6 December, with 1,497 Northbound cycling journeys, and 1,797 Southbound. Although cycling numbers have dropped off towards the end of the month, Transport for Greater Manchester hopes the numbers will show an upward trend over time.

Councillor Chris Paul, Active Travel and Cycling Champion for the TfGM Committee, said: “We’re aiming to change Greater Manchester's travel culture and increase cycling, with a target of 10% of journeys being made by bike in the region by 2025, and the new counters will provide key data on the increase in cycling traffic.

“As well as collecting crucial information, we hope the digital counters prove to be a hit with cyclists and also encourage more people to get in the saddle and use the new route.

“Cycling is healthy, affordable and it’s also one of the most sustainable travel choices you can make.”

I now cycle via Oxford Road #Manchester to see how many people have ridden along it that day! #MCRCycleCounter @OfficialTfGM @Eco_Counter pic.twitter.com/3xx7FradE2

The work is being funded by the Government’s Cycle City Ambition Fund programme, which saw eight UK cities and National Parks given funds for cycling infrastructure and measures.

The first phase of Manchester's scheme was investment into a bus priority scheme on Oxford Road, including more than 4km of segregated cycle lanes, with traffic restrictions imposed along what is Europe’s busiest bus route. Between 6am and 9pm, general traffic will turn off Oxford Road at Hathersage Road with only buses, taxis, cyclists and emergency vehicles permitted beyond.

The Oxford Road route will also feature a series of Dutch-style cycle lanes which will take cyclists behind bus stops rather than forcing them to overtake when buses pull over.

Further cycle counters have been installed across Manchester's newly-improved cycle routes, without digital displays, including on Wilmslow Road, where kerb, wand, and paint-protected cycle tracks were installed early last year.

Parts of Oxford Road will be closed from Wednesday 4 January to Sunday 8 January from Sidney Street to Booth Street East for resurfacing. Diversions will be in place for motor and cycle traffic.