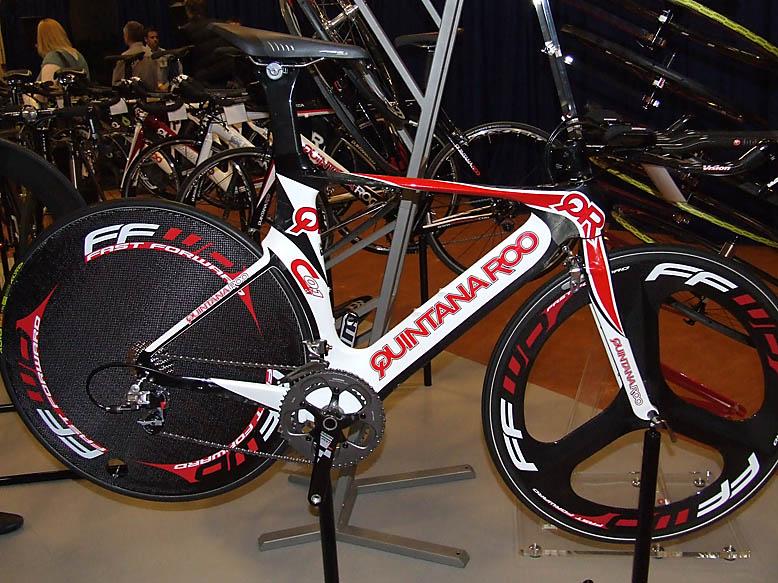 Quintana Roo CD.01 - is this the future of aero bikes?

We saw the prototype version of the CD.01 at the CORE show, now we've got the production model – the big difference, aside from a few decal changes is that this version isn't made of wood. Finished in a striking Red, White and Black colour scheme complemented by the FFWD trispoke and rear disc combination this brand new CD.01 from Quintana Roo was my star of the show.

As time triallists and triathletes know drag increases exponentially with airspeed, which means small changes to reduce your drag will have a disproportionately positive impact on how fast you ride at a given power output. Quintana Roo are the first manufacturer to use the frame itself to divert airflow from the drive side of a bike. The ‘working’ side with cranks, chain, cassettes etc., has a much greater impact in creating drag than the non drive side so with the CD.01 Quintana Roo have made an offset, heavily aero downtube. This channels air away from the drive elements of the bike and onto the much cleaner side. Very clever and it is amazing that nobody has tried this before.

The guys from Q.Roo were, as you would expect, extremely enthusiastic about this development on their 2009 range topper and perhaps rightly so. They reckon the wind tunnel figures show that this design makes a difference but how will it react in the real world only time will tell – riding on a road is different to riding in a wind tunnel.

The CD .01 on here was build up with the FFWD wheelset SRAM Red groupset, Vision stem, Vision carbon 'bars, Vision carbon pro extensions, and Quintana Roo badged brakes with Vision brake levers, Fizik Arione saddle and seatpost, and an FSA Orbit headset. That build would set you back a serious amount of money, for a fair bit less (those FFWD wheels ain't cheap) we've already seen the CD.01 advertised as a complete bike for £4699 with pretty much the same spec but substituting Reynolds 320 wheels shod with Continental Ultra Race tyres for the FFWDs.

Pretty good going considering UK distributors Paligap don't expect to have any for a couple of weeks yet. When they do they will be supplying the CD.01 as a framest (frame, fork, headset, seatpost, and brakes) for £2399 reflecting the fact that so many time triallists and triathletes are very particular about their kit and component choices.

Whichever way you chose to dress it up the CD.01 looks like a flyer.