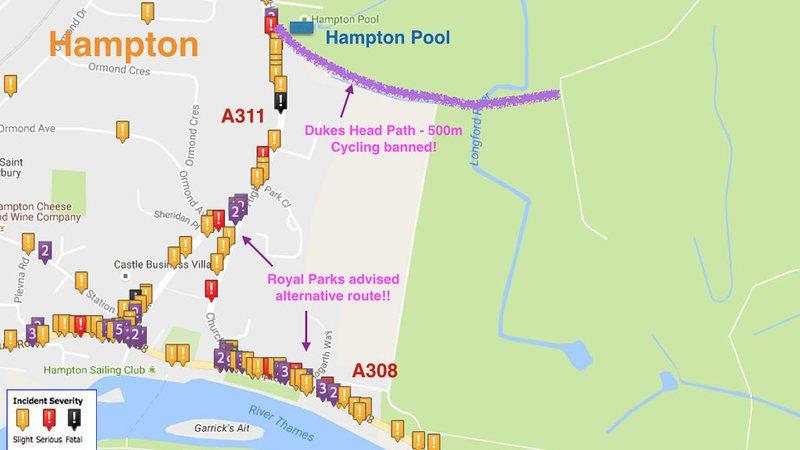 A308 is busy road with no provision for cyclists, though Royal Parks suggests cyclists walk with bikes instead of detouring on busy roads
by Laura Laker

Those campaigning against a ban on cycling along the Duke’s Head Passage into Bushy Park have published a ‘crash map’ highlighting the dangers of the alternative routes for those who don't want to dismount and walk 450m.

‘No cycling’ signs were put up at either end of Duke’s Head Passage in April, but campaigners argue that the 450-metre long path from Hampton Village is the safest route by which cyclists can enter Bushy Park.

While the Royal Parks says it's not a ban, but a request that cyclists get off and walk due to the narrowness of the path, the alternative for those who will struggle to walk with cleats, or with mobility issues, is for cyclists to divert around the park along busy local roads, including the Hampton Court Road (A308).

Campaigners say the A308 is an accident black spot with no provision for cyclists: “In 2008-12 alone, 32% of all accidents on the A308 involved cyclists (15 of 47 reported) compared to the national average of 7.4%. The A308 is four times more dangerous for cyclists than the average road.”

A recent update to the petition features a ‘crash map’ of nearby roads, including the A308 and A311. The accompanying text says it shows 150 collisions, including two deaths and multiple serious injuries, and adds: “Outrageous – this is an accident waiting to happen.”

According to Cyclestreets’ STATS19 tool, a 1km stretch of Royal Parks’ suggested alternative route, along the A311 and A308 saw 20 collisions resulting in injuries to cyclists between 2005 and 2014, six of which were serious.

The alternative – Duke’s Head Passage – was a shared-use path until the recent change in policy.

A spokesperson for the Royal Parks said they haven't advised people to use the alternative route, but have asked cyclists dismount and walk along the Dukes Head Passage, which is 1.4m at its narrowest, after which they can continue to cycle in the park.

The spokesperson said: “We took the decision to ask people to dismount their bicycles on Duke Head’s Passage Way, for 450 yards, due to it being a narrow pathway which makes it unsuitable for cycling.

“We operate a liberal cycling policy in Bushy Park and this decision was ultimately taken for the welfare of both cyclists and other park users.

“We’re not excluding anyone from using this pathway, and we feel that walking with your bike for 10 minutes (at the most) is a very small compromise that will benefit all park users.”

Responding in July to an enquiry about why the ban on cyclists had been introduced, park manager Ray Brodie said that it was due to ‘near-misses’. He said there had been no reported accidents and just two near-misses.

In separate correspondence, dating back to February, assistant park manager Bill Swan informed someone complaining about a lack of consideration by cyclists using Duke’s Head Passage that it was “rare” for the park to receive such complaints.

Earlier this month, Vince Cable – who until 2015 was MP for Twickenham, the constituency in which Bushy Park lies – expressed support for those campaigning against the ban and urged people to sign the petition.