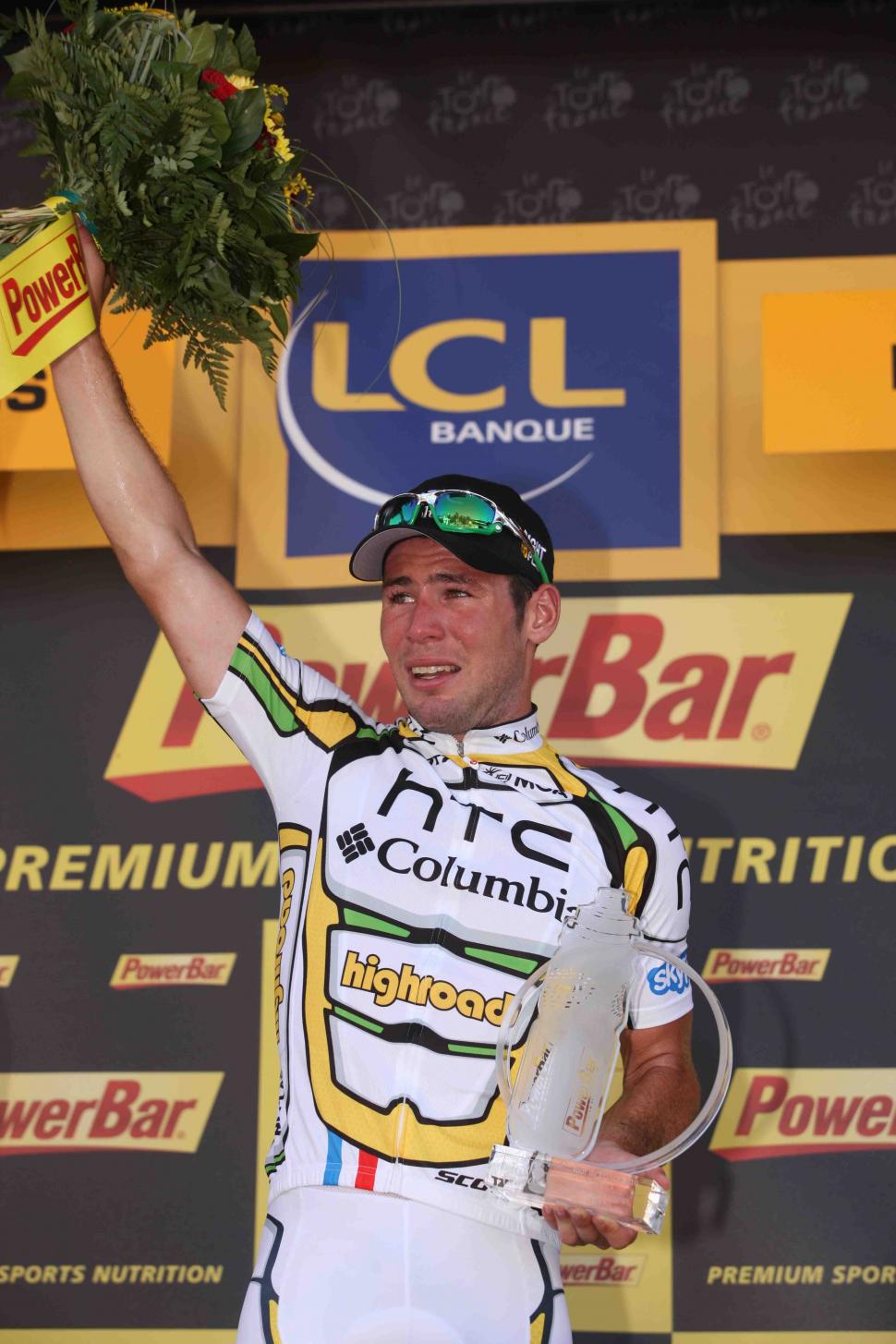 Mark Cavendish almost didn’t start today’s Stage 18 of the Tour de France, in which he won his fourth sprint victory of this year’s race, the HTC-Columbia rider revealing that he was battling illness as the race made its way through the Pyrenees.

The Manx Missile’s latest win confirms his return to peak form despite a series of setbacks both sporting and personal that have threatened to derail his progress since shortly after he completed last year’s six-stage haul on the Champs-Elysées.

“I wasn’t sure if I was going to even start the stage. I’ve been sick the last four days with bronchitis,” he said after his victory, with his words reported on the Tour de France website, adding, “actually, there are a hell of a lot of guys in the peloton with the same thing so I’m not only one. But I finally had the fever yesterday and I was dead last night and never thought I could start today.”

Luckily for the Manxman, however, he and his team decided that he was well enough to start the 196km stage in Salies de Bearn this morning and see how it went, although he confessed that during the stage, while chatting with Bradley Wiggins, with whom he won the Madison world championship in Manchester in 2008, the Team Sky rider had asked him whether he would be sprinting for the win today.

“I told him, ‘Yeah,’ said Cavendish. “He then told me that I’m not normally as talkative as I was when I’m up for a sprint. But I told him that we didn’t really have the pressure on and if I don’t win, we know the reason… but it was so nice to see the guys working so incredibly hard,” he added.

“I was sitting in 10th wheel and the guys were pulling and pulling and pulling. The guys in the escape were strong and also very clever and, as we saw in the end, it was hard to bring back [Daniel] Oss – he did a brilliant ride at the finish – and we had to use Michael [Rogers] and Tony [Martin] to pull him back,” he continued, referring to the young Liquigas rider who had been in a day-long break before launching a solo attack as fellow escapees were about to be swept up.

In today’s sprint, the HTC-Columbia rider was missing his usual leadout man, Mark Renshaw, thrown off the Tour for headbutting Garmin-Transitions’ Julian Dean, second today, and then moving across Tyler Farrar’s line as Cavendish clinched victory on Stage 11 in Bourg-les-Valence.

“It was up me to kind of freestyle for the last kilometer,” Cavendish said of the finale to today’s stage. “I was jumping from wheel to wheel; I was back to my old style of sprinting and it worked out, so it’s okay,” he continued.

“This one is for Mark [Renshaw],” Cavandish continued. “We actually planned a celebration. I was going write ‘Renshaw’ on my gloves but Bob [Stapleton, team owner] said I couldn’t do stuff like that,” he added, probably a wise decision given that the sprinter’s celebrations have already landed him in trouble this year – in May, he was withdrawn from the Tour of Romandie after flicking the V-sign to his critics.

“I think the whole team rode the way they did for Mark today,” Cavendish went on. “It was remarkable. We miss him in the team, we miss him when we’re racing, we miss him at the dinner table and I still think it’s a shame that he left in the circumstances that he did,” he added.

The Manxman’s win today gives him an outside chance of topping the points classification in Paris, but after a day on which Thor Hushovd once again misfired in the sprint, finishing in 14th place, it’s Italy’s Alessandro Petacchi who will start Sunday’s stage in the green jersey and in all likelihood will still be wearing it on the podium afterwards.

The Lampre-Farnese Vini rider now stands on 213 points, with Hushovd on 203 and Cavendish on 197. Assuming none of the riders pick up points on offer at the two intermediate sprint on the Champs-Elysées – although Hushovd in particular will be keen to grab the maximum six available on both occasions – Cavendish would take the green jersey if he crossed the line first and Petacchi were no better than seventh.

Given the way that points are allocated – the gaps between the points awarded for each place narrow as one goes down the finishing list – Cavendish’s hopes diminish the further back he ends up on the stage; come third, and he needs Petacchi to end up no higher than 16th, for example.

“I’ll never say never when it comes to the green jersey but I lost it in the first week,” Cavendish confessed, referring to his crash on Stage 1 on Brussels and then his failure to win in Reims on Stage 4, when he had been perfectly led out but failed to find the power to take him to the line, finishing 12th.

“It [the green jersey] hasn’t really been my aim,” Cavendish insisted. “At the end of the day, I like to win bike races. I’ve always said, ‘If I win the green jersey by winning races, that’ll do.’ We’ll try and win again in Paris and see what happens.”

The fact that Cavendish is still in with a chance of winning the points competition after his disastrous start to the Tour speaks volumes for his determination and resilience, and his return to form also suggests that while one of his two stated aims for 2010, the green jersey, may elude him, the other – the World Road Race Championship in Melbourne in October – is a very realistic proposition.

Indeed, with four stage wins so far during this year’s Tour taking his career total to 14 – two more than his sprint mentor, six-time green jersey winner Erik Zabel managed – it’s easy to forget that Cavendish came into this year’s race on the back of a series of problems on and off the bike that seriously disrupted his build-up.

The sprint ace’s start to the 2010 season was delayed by a dental abscess that manifested itself after he returned to training too soon following cosmetic dentistry, denying him the opportunity to defend his Milan-San Remo crown, and after two years in which he won around fifty races, he came to this year’s Tour de France with just three wins under his belt.

There was also a very public spat with team-mate André Griepel, who believed that his form justified him and not Cavendish being selected as the team’s sprinter for the Tour de France – although the Manxman’s return to form seems to have put that argument to rest.

Then, last month, Cavendish was involved in a spectacular crash in the Tour of Switzerland as he fought for the sprint with Cervélo TestTeam’s Heinrich Haussler.

Cavendish was blamed for causing that chute, which forced Haussler to miss the Tour de France, by both the race commissaries and by some of his fellow professionals, who delayed the start of the following day’s stage in protest at what they claimed were his dangerous tactics.

It wasn’t ideal preparation for the Tour de France, and with the scars from the injuries he received in Switzerland still healing, Cavendish did well on Stage 1 in Brussels to avoid doing further damage to his back when he came off his bike on the final corner.

While officials did not apportion any blame to the HTC-Columbia rider for that crash in Brussels, some elements of the press clearly felt otherwise. French sports daily L’Equipe, often called the ‘Voice of the Tour’ – both are owned by media and events company ASO – awarded the Briton 0 out of 10 for his performance, and branded him a “pyromaniac” for the perceived aggression of his style of riding. His subsequent 12th place in Reims would hardly have helped his mood.

At the end of last year’s race, it had all been so different, with Cavendish unbeatable when it came to a bunch sprint. When he scored a memorable win on the Champs-Élysées 12 months ago to claim his sixth victory of last year’s race, the Manxman was still smarting from his disqualification on Stage 14 for pushing Hushovd into the barriers.

That decision by the race commissaries had handed the initiative in the points competition to the Norwegian, who subsequently pressed home his advantage by sweeping up intermediate sprint points in the mountains, but by winning in Paris, Cavendish was sending out a clear message; he’d be back this year, and he meant to take the green jersey he felt he’d been denied.

Yet while much of the hype in the build-up to this year’s race suggested he would do just that, the fact was that he came to start in Rotterdam three weeks ago with just three wins this season, comprising a stage each of the Volta a Catalunya, the Tour de Romandie and the Tour of California.

Publicly, at least – Cavendish had already split with his long-time partner just four months before their planned wedding last year - the turnaround in Cavendish’s fortunes began last in September.

During that month, he succumbed to a lung infection during the Tour of Missouri, followed by close friend and fellow Manxman, the Team Saxo Bank rider Jonny Bellis, suffering serious injuries in a scooter accident after an evening out with Cavendish in Tuscany, where they are both based, resulting in him being placed into an induced coma.

The same month also saw Cavendish’s brother Andrew, who had himself shown promise as a cyclist in his teenage years, arrested for his part in a scheme to import cocaine and cannabis to the Isle of Man, which would result in him being imprisoned for six years.

Add that to the problems Cavendish has subsequently endured in 2010, and it’s difficult to see any sportsmen coming back to top form so quickly from that catalogue of mishaps. The fact that he has done so, and answered his critics in the best way possible, suggests that even if he doesn't win on Sunday, his performance in this year’s Tour de France eclipses that of 12 months ago, whoever ends up wearing green on Sunday.