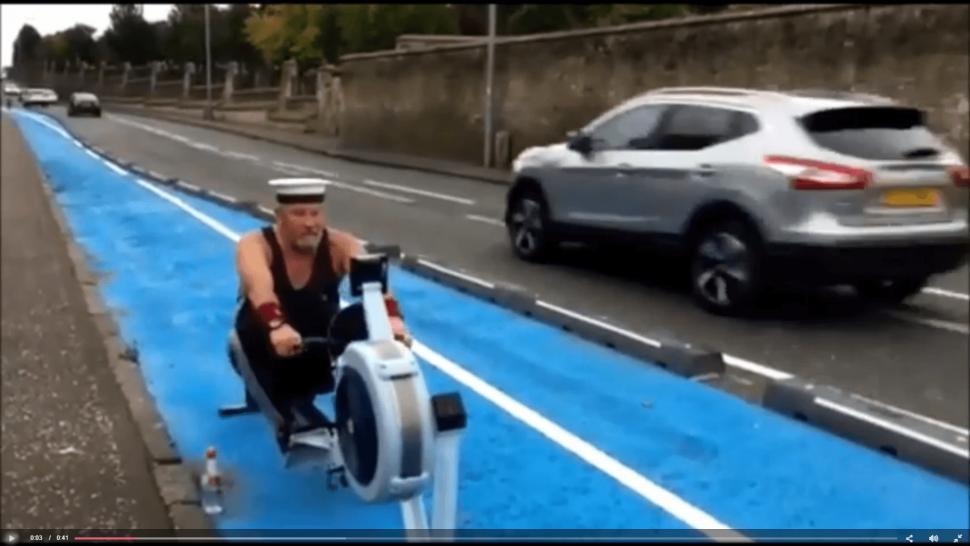 Anger that local people weren't consulted over the route, which protected cyclists without removing any motor traffic capacity, means the council must now spend £95k removing it...
by Laura Laker

The protected cycle track on an Ayrshire road that sparked one man’s rowing protest and claims of safety risks, will be removed at a cost of £95,000, following a councillor vote 19-11 today.

Despite the kerb protected cycle track not removing any capacity or parking spaces from motor traffic on Holmston Road, in Ayr, an unprecedented level of opposition put pressure on local councillors to vote it be removed, at South Ayrshire Council's expense.

The two-way cycle track, installed by the Ayrshire Roads Alliance, was set to be part of a longer route to enable more people to travel by bike in Ayr and the countryside to the East of the town. One councillor at the meeting, who proposed trialling the tracks for six months before making a decision, said ripping it up would amount to an act of “environmental vandalism”, but his motion was overruled.

“We are disappointed the vote went this way but respect the Councillors’ decision. We will continue to work with the relevant authorities to understand the reason for such strong opposition and hope to find a solution that helps more people to cycle in Ayr.

“The new cycling infrastructure simply replaced painted cycle lanes with a two-way cycle track, protected by a rubber kerbstone. It formed a safe, traffic-free cycle route from the centre of Ayr along Holmston Road before linking onwards to a path out to Coylton. It is important to stress that this project made no changes to the previous road or parking space.

“We believe that over time this is a small change which would have had a big impact. Protected lanes help people of all abilities to cycle for their everyday journeys. They make our roads safer, while cycling saves people money while providing a daily dose of exercise. The more people that get on a bike instead of a car, the less congestion on our roads.

“We have funded various segregated cycle paths including the Innocent to Meadows in Edinburgh and South West City Way in Glasgow which are very well used. In European cities that have seen a dramatic increase in cycling numbers segregated routes have been a vital ingredient.”

The Ayr Advertiser reports one complaint about the cycle route was local people weren’t consulted on its construction, and many councillors didn’t know about it until work started.

The Ayr Advertiser quoted Councillor Alan Dorans, SNP Group Leader saying: “This motion to remove the cycle lane is not an indication of the council’s position nor a political SNP movement.

“It is more in the interest of Forehill, Masonhill and Holmston’s County Council. The authority for the Ayrshire Roads Alliance was there, however, there was no consideration with the wider community. This is appalling and inexcusable.”

The Ayrshire Roads Alliance is public sector partnership created to run East and South Ayrshire roads and transportation services, in a bid to save money ahead of projected cuts to public service spending.

Troon Conservative Councillor, Peter Convery, said: “The problem I have here is the total lack of sense by the Ayrshire Roads Alliance.

“I can’t agree with the amendment, it’s not safe. If I was the head of the Ayrshire Roads Alliance I would be considering my position.”

Councillor John McDowell proposed an amendment which would keep the cycle tracks in place for six months, while usage would be monitored. However, this motion was rejected, according to the Advertiser.

McDowell said in the meeting: “If you support the decision to rip up the cycle lane it would be an act of environmental vandalism.”

The meeting heard local emergency services had no problem with the cycle tracks.

Cllr Alan Dorans said he believed the cycle tracks should be ripped up immediately, to avoid “antagonising the wider community even more”.

It was noted it will cost South Ayrshire Council £30,000 to rip up the cycle track from unmarked reserves, along with returning £65,000 of grant money to the Scottish Government.

Sustrans also provided £30,000 of Community Links Funding towards this project.

Local cyclist and Cycling UK campaigner, Drew Moyes, told road.cc he is not sure whether the former advisory one way cycle paths will be brought back.

He said: “We don’t know whether or not, by taking it out, they intend to reinstate the previous path, which was usually filled with parked cars, meaning that cyclists were continually leapfrogging parked vehicles and into the traffic lane.”

A group of cyclists, including Mr Moyes, wrote a letter to Councillors this week supporting the bike track, and received three or four “sympathetic” responses.

The letter said: “The cycle route in Holmston Road is an important part in a move to create a safer route for cyclists travelling from and to Coylton, Annbank and Tarbolton. It also provides a means of getting Ayr cyclists and pedestrians out to the countryside and the countryside into town.

"It replaces an advisory cycle route system which was obstructed by parked cars. This pushed cyclists into the line of fast moving vehicles with safety issues for both. Under the new scheme there is clear demarcation for all road users.

+ that recognition has not been given to the Scottish Government's hierarchy of pedestrians and cyclists to be considered first in local developments.

+ that there is a lack of awareness of the growing need for cycle friendly routes for commuting or leisure.
+ that many objections are short lived and often only represent a personal view”