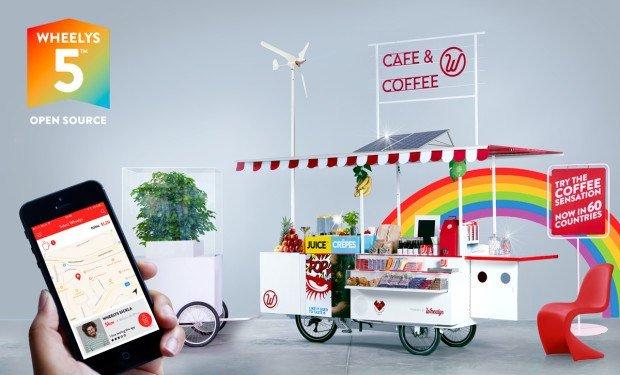 The mobile open source cafe that exploded on crowdfunding websites can now be a juice bar, a créperie or an ice-cream bar
by Elliot Johnston

Running your own pedal-powered business has never been easier, and the choices have never been as broad as they are today - thanks to Swedish brand Wheelys.

The mobile bicycle-mounted (or more accurately e-trike-mounted) coffee shop creators at Wheelys successfully funded the fourth generation of Wheelys units in March, and the team behind years of successful bike coffee shops are back for more with the multi-faceted Wheelys 5 Open Source.

The mobile restaurant company opened the Wheelys 5 Open Source to investors on crowdfunding site Indiegogo.com last week. It had already raised 104% of its target at the time of writing.

What's new? Well, the general idea is very much the same. The unit is still mounted on a 250W e-trike, gives owners access to water, electricity and gas power, the chance to move their business where they like, and the ability to set up shop for a much lower price than a traditional brick and mortar store.

However, where the old Wheelys unit only offered coffee, the 5 Open Source comes with the option of seven modules that will allow the unit operator to conjure up a wide range of goods. Should you be looking to start your own bike-based restaurant, you'll have the option of peddling juice, crêpes, ice cream, or several different varieties of coffee - including drip-coffee, nitro coffee, Turkish coffee, or your traditional espresso - to your customers.

Wheelys is very quick to highlight the cost benefit of investing in one of its units rather than heading to classic brick-and-mortar retail options, they say that you can buy 100 Wheelys units - at $6999 each - for the same price as opening one generic city cafe.

It's not just the price of the unit that they company is shouting about, it says that the Wheelys 5 Open Source is "the biggest invention in mobile food since some greek invented the wine bottle." While that may sound like a long shot, there are four generations of sold-out Wheelys units behind the company to back up it's team's optimism.

If you're interested in opening your own Wheelys store, you better be quick, the company says that the price will go from $6,999 per unit to $8,999 per unit next week.