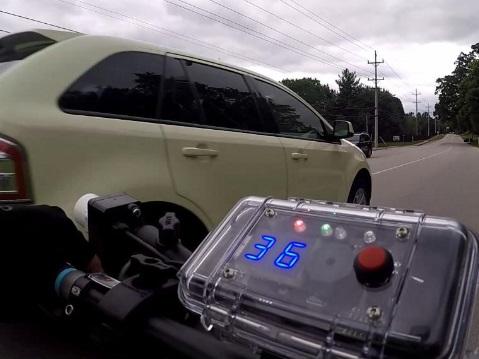 Simon Keen sent footage of an extremely close pass but claims Hertfordshire Police won't act unless someone is hurt...
by road.cc

A cyclist has accused police of failing to act after a driver passed him so close he claims he was almost knocked off his bike.

Simon Keen approached road.cc with two videos of drivers coming dangerously close to him on one commute in September, in Batford, Harpenden.

He alleges when he sent the footage to Hertfordshire Police with his concerns, they told him they won’t prosecute or educate drivers unless someone is injured. Road.cc has contacted Hertfordshire police to confirm or deny this, but the approach would be in stark contrast with a recent West Midlands Police initiative to prosecute close passing drivers in an innovative close pass initiative.

Keen described the second of two close passes a “very close shave, with a car overtaking me at night approaching a blind bend and almost hitting me and an oncoming car.”

He says: “Having reported this to Hertfordshire police, which in itself was a challenge, I have been told that neither Herts police nor Bedfordshire police (where I live) will prosecute or even have a word with drivers.

“They will not consider videos as providing any evidence and will only get involved if someone is hurt,” he said.

Keen’s two close passes can be seen in the following videos. In the first instance a driver pulls out of a side road as Keen passes, which he says felt like the driver was driving directly at him. In the second incident, a different driver attempted to overtake Keen on a blind bend, with oncoming vehicles.

He describes the incident in an email to police, seen by road.cc.

He said: “The driver had had time to overtake me when the road was clear and also made no attempt to pass me with any clearance. This incident was far worse as he only just missed me.”

Keen says it is unlikely the two drivers didn’t see him, as his bike had bright lights front and rear, as well as a Fly6 with flashing red light on the rear, he was wearing a white cycling jersey and reflective backpack, with reflective paint on his tyres and saddle bag.

Police in Camden, North London, are undertaking a similar decoy close pass initiative as West Midlands, and today sent a driver for prosecution for passing within six inches of one of their officers.

Whilst we try & educate people first when you give me 6" passing room then jump a red light expect my officers to send you to court. pic.twitter.com/Hup404MrTC

Over the summer Hertfordshire police did a crackdown on pavement cycling in Baldock and Letchworth.

Sergeant Alan Clarke, of the Letchworth and Baldock safer neighbourhood team, said: "We have had increasing reports of people, predominantly adults and teenagers, cycling on pavements."

"Cycling on pavements is dangerous, anti-social and unpopular with cyclists who obey the rules of the road - as well as pedestrians who have to negotiate bikes using the pavement."

"This kind of behaviour is unacceptable, frequently causes collisions and can be very intimidating for people trying to use the footpath."

It is unclear whether anyone had been injured by pavement cycling.

We will update the article when we hear from Hertfordshire Police.