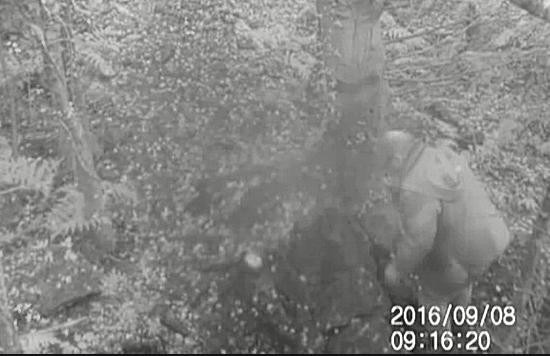 Ron Davies, filmed by a hidden camera, says he was trying to remove obstacles
by Simon_MacMichael

Ron Davies, who served as Secretary of State for Wales in Tony Blair’s first cabinet, has denied claims he put obstacles on a trail used by mountain bikers, insisting he was trying to remove them instead.

His denial came after video footage from a hidden camera emerged of two men apparently placing logs and rocks on the trail near Caerphilly, the town Mr Davies represented in Parliament from 1993 to 2001.

Initially, Mr Davies, who volunteers for the Caerphilly Woodlands Trust, told BBC Wales that he could not remember which trail the footage, taken on 8 September, was shot on.

Subsequently, however, he told the South Wales Argus: “It is me and now I have had a chance to look in detail, I can identify that it is in an area called The Warren.

“I wasn’t blocking up the path but clearing it for walkers, horse riders and cyclists.”

He continued: “There was a large stone on the left of the path and some brambles on the right hand side.”

The area where the footage was taken is managed by National Resource Wales (NRW) and was sent anonymously to Ian Clarke of Van Road Mountain Bikers.

He told the newspaper: “I don’t know Ron, but from what I have read his story has changed.

"If you look at the footage, the dark strip is the trail and it looks to me that they are putting stuff on that strip, where riders go through, to cause an obstruction.”

He acknowledged that there has been conflict in the past between cyclists and walkers using the trail, saying: “If they were obstructing routes we have agreed not to go down then fair enough.

“But almost a day after our agreement in July we have seen logs covering official routes and that’s just dangerous, if someone has an accident because of one of those obstructions then who is liable?

"It shouldn’t be the NRW, it should be whoever is moving branches and logs.”

NRW regional land manager, Sally Tansey commented: “The allegation against Ron Davies is a matter for the police, but we do not condone the placing of obstacles across trails on our land.

“Our focus is to manage the 210km of built trail network in these woodlands and we encourage mountain bikers to use these. We will also continue to report any malicious activity or criminal damage to the police.”

Mr Davies, however, believes that some cyclists are irresponsible in the way they use the trail.

“What has happened is there has been a huge increase in cyclists from across South Wales this year and they are not using it in a way recognised as responsible.

“As soon as NRW bulldozed some routes and put up signs, cyclists wrote some expletives over them, ignored them and used the routes again.

“They build some ramps up to 15 feet high and come down at horrifying and terrifying speeds,” he added.

“If they want to build these ramps they need approval from the NRW and the local authority.”

As Secretary of State for Wales he piloted the legislation that would lead to the establishment of the Welsh National Assembly.

He resigned the post in October 1998 following what he described as a “moment of madness” when he was mugged at knifepoint on Clapham Common by a man he had met there with whom he agreed to go for a meal.