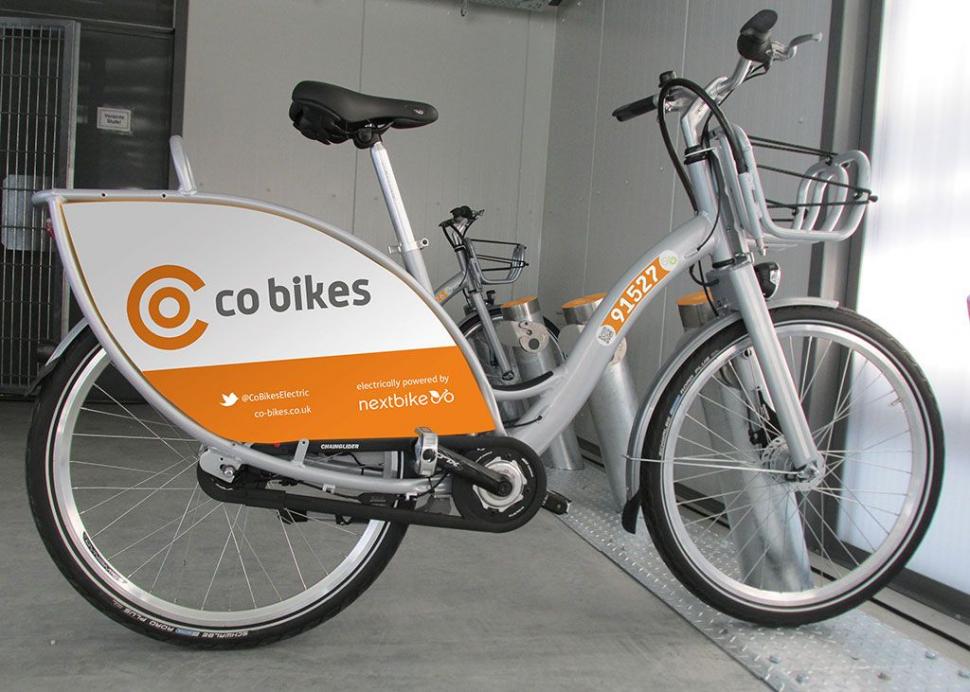 Electric hire bikes to roll out across Exeter

Exeter is to have an electric cycle hire scheme, in collaboration with a hire-by-the-hour car share provider.

The new city-wide scheme is already being rolled out, with docking hubs being placed around Exeter.

E-bikes will be available to hire from Exeter Central stations, County Hall, the Civic Centre and Digby & Sowton. There are plans for more hubs in the future, but the scheme’s launch date is still to be decided.

Mark Hodgson, founder and managing director of Co-cars, told Exeter Express and Echo: “We are currently testing the docking hubs, so we’re working hard and it will be ready soon. We have spent a lot of time getting to this point and we need to get this right.

“There’s been a lot of interest when we’ve been installing the hubs and cycling the bikes around Exeter.”

Locals and visitors will be able to hire bikes for periods lasting 30 minutes to 24 hours from later this year.

23 bikes will be available in the first phase of the scheme, with more being added over time.

With power-assisted pedaling, the bikes will have a range of 40 to 60 miles.

The scheme has been part-funded by the Department for Transport through Bikeplus, Devon County Council and Great Western Railway, and is supported by Exeter City Council.

The e-Bike, provided by Nextbike, has a Dutch-style frame with a 600w Pedelec motor, seven gears, lights, comfort seat, an on-board computer, front carrier, front suspension, disc brakes, integrated locking system and a cable lock which can be used to secure the bikes at any location.

Members will be able to scan using a smartphone app, or swipe their smart membership card, to unlock the e-Bike and begin transmitting their travel information direct to their account for monthly payment.

New customers are able to simply turn up and book directly from the touch-and-pay terminals using a credit card.

Victoria Hatfield, economy and tourism manager at Exeter City Council, said: “Exeter’s rapid and continuing growth has made cross-city travel and parking a challenge. This could threaten to impact people’s well-being, business efficiency and collaboration amongst our world-renowned knowledge economy, as well as air quality and the city’s desirability.

“However, by developing an integrated, sustainable transport network – of which e-Bikes are a crucial part – we’re addressing all these issues, and fast establishing Exeter as a leading, smart ‘sharing’ city that is the envy of many.”

Councillor Stuart Hughes, Devon County Council cabinet member for highway management, said: “This scheme is another piece in the jigsaw of infrastructure improvements to support economic growth while opening up travel choices and tackling congestion.

“It builds on other work such as the Devon Metro to offer joined up transport solutions across the city, making maximum use of the major assets such as the rail network. The e-bikes are a convenient and effortless way to get around on two wheels and we're pleased to be working with Co-cars on this initiative.”

Last year we reported how JCDecaux, the company behind Paris’s Vélib' bike hire scheme and dozens of others across Europe and the Far East, has announced production of a new e-bike for hire.

JCDecaux, the largest outdoor advertising corporation in the world, offers public hire bicycles financed by a local advertising operator in return for a 10-year licence to exploit city-wide billboards in the given city. It currently has 52,000 bikes for hire in 13 countries.

It has now branched out with the launch of self-service electric bikes that can be fitted with a personal rechargeable lightweight battery.

Users will rent their own battery, and fit it on any bike. Each charge lasts around 10km, which the company says is about four times the average journey on a hire bike - although that may rise once the e-bikes come into use.

The bikes feature an automatic warning system if the user forgets to remove the battery, and smartphone connectivity via a dedicated app.

The customer will have an online subscription and a monthly charge.

In July, Dundee announced a new cycle hire scheme in collaboration with  Electric Bikes Scotland, who are planning on setting up pick-up and drop-off cycle hire at various points across the city.

Electric Bikes Scotland have also said that it would be “ideal” if a hire-point station could be installed at Dundee Airport, creating a seamless eco-friendly transport link in the city.

Daniel Kochaniuk, director at Electric Bikes Scotland, said: “With the new developments that are going up across the city, we would be looking to work closely with all involved to install bike pick-up and drop-off points at various locations, such as hotels and tourist points.

““The electric bikes that are available for hire are to encourage people who may have a lack of confidence with cycling build it back up.

“People who may have had an operation or are less able to use a conventional bike can hire an electric bike to get them back in the saddle.”