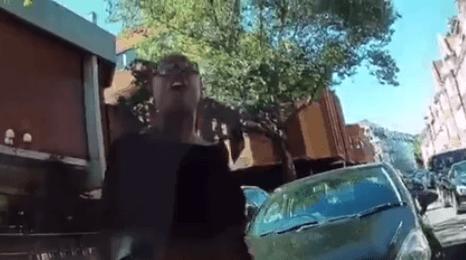 Clarkson accuses Jeremy Vine of "selfish" cycling, while driver who kicked him says she was "provoked"

Former Top Gear presenter Jeremy Clarkson has accused BBC broadcaster Jeremy Vine of “selfish” cycling after the latter posted a video this week showing a driver kicking and swearing at him. Meanwhile the motorist involved has accused Vine of riding dangerously, claiming that he “provoked” her.

The incident happened by Kensington Town Hall on Friday 26 August as Vine rode home from work, with the radio and TV presenter posting it to Facebook last Monday and confirming it had been passed to the Metropolitan Police.

> Video: Driver tailgates BBC's Jeremy Vine then kicks out at him

Vine had been riding in the centre of the one-way street, which had parked cars either side, when a motorist came close to his rear wheel.

Subsequently he stopped to remonstrate with the motorist, who then got out of her car and started abusing him verbally, also kicking out at him.

Like many cyclists, Vine had chosen his road position to prevent any motorists behind from attempting what would have been a dangerous overtaking manoeuvre as well as to stay out of the ‘door zone’ – indeed, the video shows that when the driver got out of her car, her door hit a parked vehicle.

Clarkson saw things differently, however. In his column in The Sun, he said of Vine: “He can be seen cycling down the middle of the road, deliberately blocking the cars in his wake, and when one gets too close he stops — still in the middle of the road — so he can record the woman driver’s foul-mouthed tirade.

“The message is clear. He’s been verbally assaulted while on a noble quest to save the polar bear.”

He continued: “But hang on a minute, Vine. How did you know that the woman in the car behind wasn’t rushing to see her injured child in hospital?  How did you know there wasn’t a pregnant girl on the back seat who was about to give birth?

“Can you imagine how frustrating it would be to be stuck behind a sanctimonious cyclist when you really are in a genuine, tearing hurry?

“Of course, it is not illegal to cycle slowly down the middle of a narrow street. But it is selfish and annoying for everyone else.”

Vine, who this month becomes the main presenter of BBC’s Crimewatch, was not too troubled by Clarkson’s comments, telling the London Evening Standard: "I love Clarkson and I laughed all the way through his brilliant column.

"Obviously I didn't hold the lady up - after her violent reaction I let her pass, and, sure enough, caught up with her at the next lights.

"I live in hope that one day road users can all co-exist without this sort of thing."

According to The Sun, the driver involved – a 22-year-old student from Brixton named Shayna, who did not give her surname – blamed Vine for the incident.

“He made me look impatient but he was riding on the pavement and came out on to the road in front of me, with no hand signals,” she insisted.

“The road had parking on either side. He was dangerous. He pulled out in front of me, making me have to make an emergency stop. Then he had the arrogance and cheek to block me in the middle of the road, that’s what set me off.”

Vine’s video shows the motorist’s car turning onto the street where the altercation took place, initially 20 yards or so behind him.

However, the driver added: “Cyclists feel that they can just come into the middle of the road. It’s not right. And to top it off he followed me after.

“He made out that I attacked him, and I’m an angry woman. I was provoked but I’ve been portrayed as a psycho.”

She told The Sun that she had not yet heard from the police, but Vine’s representative told the Independent the footage had been passed to the police, saying: “If this lady thinks she has a right to kick, verbally abuse and threaten other road users, then she is even more dangerous than I thought.

“The police have all the evidence and we should wait for them to decide what offences were committed.”