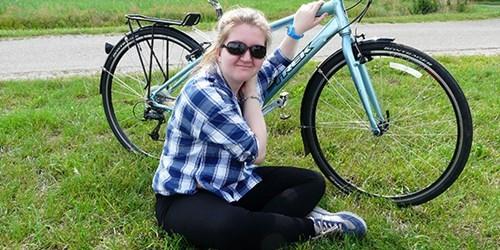 A teenager has received an undisclosed, five-figure sum 14 years after being involved in a road rage hit-and-run. Emily Kirwin was just four years old when Carl Baxter stopped and reversed his Range Rover over her and her father Stephen while she was in a trailer on the back of his bike.

Stephen had raised his fist when Baxter passed within a few feet of them near South Newbald, East Yorkshire. The Telegraph reported that Baxter then reversed 200 yards into the bike, crushing the trailer.

Baxter gave himself up to police and was jailed for two years in 2003 after pleading guilty to two counts of inflicting grievous bodily harm, dangerous driving and failing to stop at the scene of an accident.

Speaking outside Hull Crown Court at the time, he said: "I had never seen a trailer like that before. There was no sign to say a child was in it. I panicked. I would give anything for it not to have happened."

Speaking about the injuries she sustained, Emily said:

“In a way it was worse for my parents because they witnessed the accident, whereas I can only remember waking up in hospital. I’d been in a coma for six days. My jaw was broken – I’d lost most of my baby teeth – my nose was fractured and I couldn’t focus properly. I didn’t even have the strength to walk for weeks.

“There was a chance I could have developed epilepsy and I’ve had to have regular scans to check there was no long term damage. The regular trips to hospitals are just something I have had to get used to. My face is still slightly distorted, but fortunately for the most part I have made a good recovery.”

That recovery required years of treatment and it was only recently when she turned 18 that medics could say for sure there had been no long term damage. Emily has therefore now settled a civil case against the driver’s insurers.

As well the jail sentence, Baxter was also banned from driving for two years. Stephen, who sustained a badly fractured leg which took months to heal, said:

“Everyone thinks they have a right to drive, but a car is a potentially lethal weapon. He used his car as a weapon, but got it back after two years. Drivers need to be punished proportionately for their transgressions.

“We used to go out cycling together a lot as a family, but now the only time we can do that and feel safe is off road or abroad in countries like Holland where cycle lanes are separate from the cars.”

Richard Crabtree, from law firm Slater and Gordon, which represented the family, said:

“Emily suffered a significant brain injury and this case was about ensuring she was properly compensated for the long-term effects of this tragic accident and whatever care she might need in the future.

“Until recently we couldn’t be sure what those effects and care needs would be, but after such a horrendous ordeal we are delighted that she has now made a full recovery.”