Subscribe
Back to news
news
Art and design
Riding 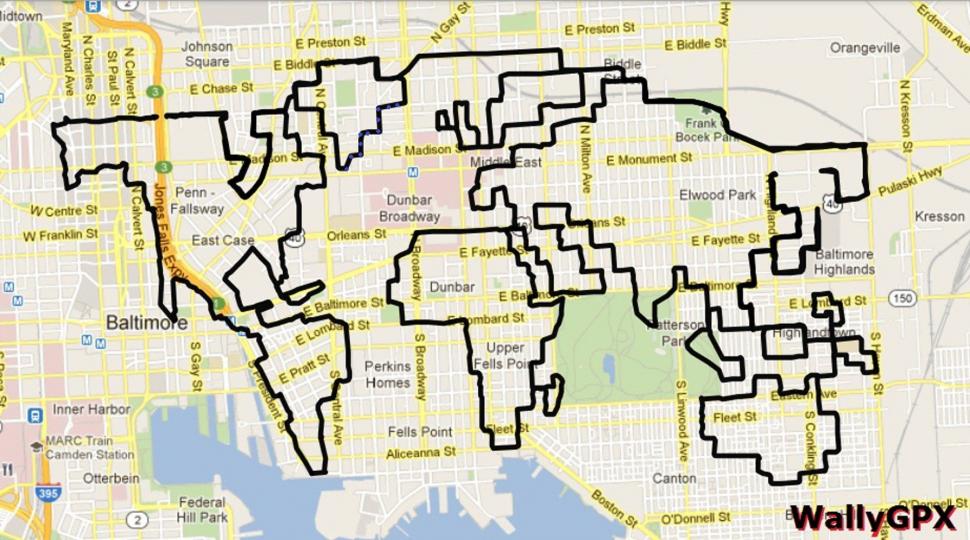 US Teacher-cum-GPS-artist Mike Wallace (WALLYGPX) has been GPS 'painting' for eight years - here he talks about his favourite piece, a 32-mile map of the world...
by Elliot Johnston

This isn't the first time we've heard about WallyGPX - or Mike Wallace as his students know him - here on road.cc. The prolific GPS artist has spent the last eight years painting using his bicycle and a GPS device, but Baltimore, US, news network WBAL-TV 11 caught up with the teacher-cum-artist recently to talk about his artistic endeavours.

"By day I'm Mr Wallace at Gilman school, but come summer time I get out on my mike and I try to knock out as many pictures as I can," the science teacher told WBAL-TV.

Eight years since picking up a GPS device and painting his first picture, Mr Wallace is still at it - as his extensive blog which shares his internet persona's name WallyGPX will attest.

"It didn't take me long to realise I could track myself using certain apps," he said. "Then I tried to see if I could write my name across the city, and when it worked I realised I could do anything."

And anything Mr Wallace has indeed done.

>US teacher tracks his bike rides by GPS + gallery

A quick glance at his WallyGPX blog, as well as a brief look over the numerous articles covering his antics that we've featured here on road.cc, will show his deep range in inspiration and ambition.

When asked about his favourite piece, Mr Wallace described his experience painting the world map over 32 miles of Baltimore's city streets.

"By the end of [the map painting] I had run out of water, the battery light [on the GPS unit] was blinking, I was going full tilt to knock it out at the end. When I got to it I finished on the side of the road and I was just celebrating."

Over the last eight years this Baltimore artist has covered over 2000 miles, burst 31 tyres, and used four bikes in the process. We're not sure many other artists can express their portfolios through statistics like that, but we hope to see many more paintings over many more miles in the coming years.