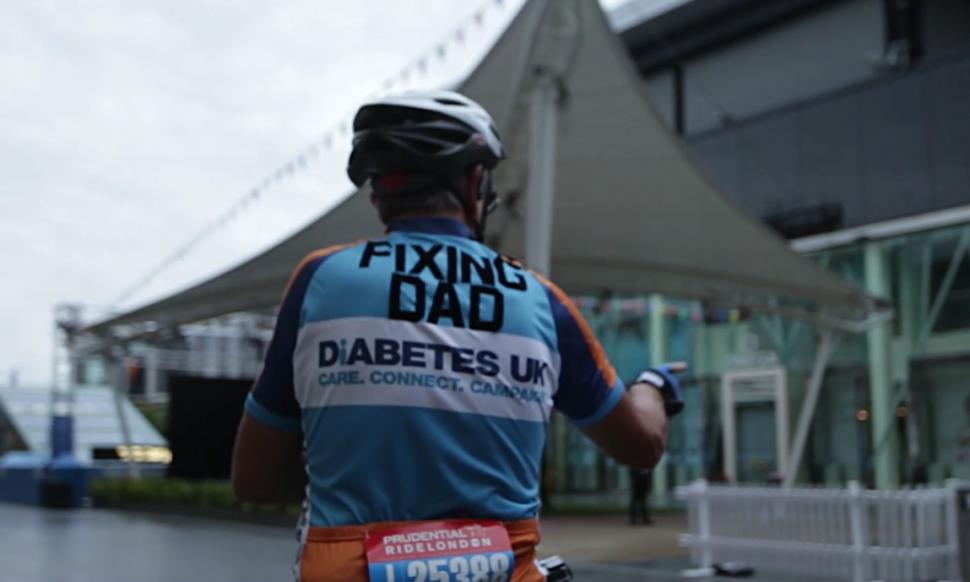 Geoff Whitington's story about how his sons & cycling saved his life is set to air in 'Fixing Dad' documentary on BBC 2 this weekend...
by Elliot Johnston

If you have a family member or loved one for whom you harbour concerns about their health get ready to tune in to 'Fixing Dad,' the documentary story of Geoff Whitington's journey from type two diabetes to taking on a 100-mile bike ride on BBC 2 this Sunday night.

The documentary, which airs at 10pm on Sunday, explains in detail how a stubborn 62-year old went from takeaways and lethargy to preparing to take the Prudential RideLondon on July 31.

The filmmakers, Mr Whitington's sons, also want to tell the world that "if there's someone you love who is in a bad way, don't put it off, act now to help them."

Mr Whitington was an "extremely stubborn" 20-stone 62-year old when a podiatrist's diagnosis revealed the terrifying toll the type two diabetes the Kent man had been living with since 2003 was having on his body. The doctor explained that without treatment, Mr Whitington was facing a very real chance of amputation.

Mr Whittington's sons, Anthony and Ian Whitington - who are also the filmmakers behind 'Fixing Dad - seized this opportunity to change their dad's life via a complete lifestyle overhaul. An overhaul which included large doses of cycling and a total dietary change.

They say it was met with plenty of resistance, but the endeavour was a huge success.

In an interview with the Huffington Post Anthony Whitington explained where his and his brother's motivation for changing their dad's lifestyle came from, and how the film got off the ground.

"A few things led to us starting the project," Anthony said. "The first was dad’s realisation that he might need to have his foot amputated if he continued on the same path. So fear played a big part.

"The second was that dad had seemed to become a different person - not his usual bubbly self, but withdrawing from conversations and generally very depressed.

"And thirdly, we felt guilty, being honest, that for so long our own careers, ambitions and our own family pressures had stopped us from really knowing the man who made us who we are today."

The three Whitingtons are not only in the throws of preparing for the 100-mile Prudential RideLondon next weekend, they're talking about their experience in front of corporate groups and at medical conferences and diabetes clinics.

They don't suggest it was an easy journey. They say a lot had to change, and that much will be clear in the documentary.

"There was lots of resistance. Dad is extremely stubborn,” Anthony said.

“We instinctively knew we would need to change his environment. He was surrounded by his favourite fast food restaurants, his sofas, his bad habits.

“To families everywhere we’d like to say: if there’s someone you love who is in a bad way, don’t put it off, act now to help them. Don’t have regrets later.

“However busy you are, there’s no one formula, just do something different, remind them how much they mean to you, give them goals and regular contact, and above all be positive that you can beat it and enjoy life together.”

The Whitingtons' story is also going to be available in a book - you can preorder it on their website.

Their website also lays out the 6 ingredients the Whitingtons say was crucial to their success in revolutionising the health of Geoff. Here they are in their own words:

If you want to know more about the dangers of, and how to tackle, diabetes, head over to diabetes.co.uk.