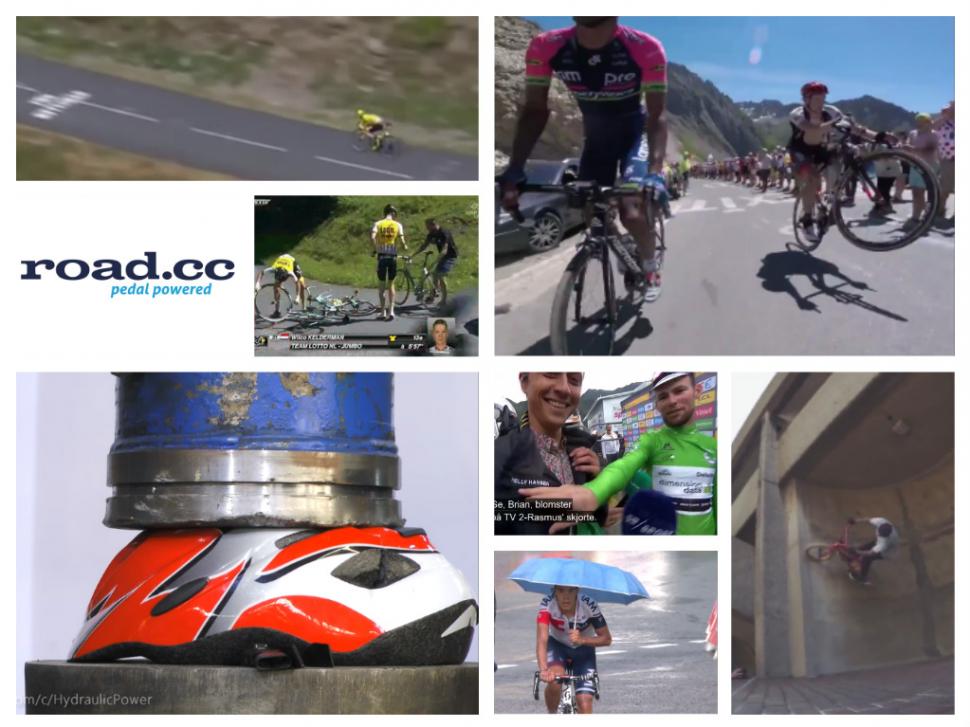 As if we hadn't already seen enough Tour de France insanity this week, we've got some more tomfoolery in today's video round-up. At least today's individual time trial should offer fewer opportunities for newsworthy antics. That way you won't be overwhelmed.

We're not holding our breath though.

Regardless, first up in today's video round-up up we've got Mark Cavendish and his bizarre relationship with one Danish journalist, followed by Chris Froome demonstrating his strange descending technique a whole year ago.

After that we get our tiny violins out for an under appreciated domestique, watch Adam Hansen break the world record (maybe) for the greatest volume of water taken on in 30 seconds, backstage with the ORICA BikeExchange bunch, an Argon 18 rider pulling a wheelie, and an IAM rider with a brolly.

After the Tour de France stuff is out of the way we watch Red Bull rider Kriss Kyle pull some 'sick' tricks, we observe how a bicycle helmet holds up against a hydraulic press, watch three guys climbing mountains on fixies, and check out a japanese pedal-powered rollercoaster.

Rasmus Staghøj is a journalist for Danish TV station TV 2, apparently he's well known on the Tour for his preferred style of shirts.

Whether this is a Tour tradition, a bit of a gimmick, or a genuine fashion choice, we're not sure. We are sure, though, that Cav has taken a particular liking to these shirts.

We say liking, but we're not sure the Manxman wants to start a Danish TV show about the shirts because he likes them. Mr Staghøj takes Cavendish's comedy in good spirits though.

The yellow jersey incumbent's incredible descending masterclass on Saturday has been somewhat overshadowed by a number incidents including his slapping of a supporter, and his running up Mont Ventoux.

While these incidents understandably trumped that descent, we want to revisit it for a moment because we've found footage that shows his bizarre technique is something he's been working on for some time.

Here he is descending down the Col de la Croix de Fer in 2015's Tour de France in a very similar position.

The curse of the under appreciated domesetique

TFW you're a being a helpful domestique and then the team car just comes along. https://t.co/lsqWASv7aP pic.twitter.com/hrIaVHV0Na

They get a rough ride, do domestiques.

Sure, it's in the job description; sure, they may be serving an apprenticeship; sure, they may just be really great team players, but when we see something like this happen we can't help but letting out a sympathetic snigger.

Here you see Wilco Kelderman of Team Lotto NL-Jumbo shooting off as his domestique sacrifices his own wheel to help his team mates.

How many bottles does a jersey fit?

Your jerseys may have one or two pockets in which to store excess water.

Did you know, though, that Tour de France domestiques' jerseys are set up with around 11 pockets.

That's a lie, but if it were true, we're not sure it would make Adam Hansen's feat of taking on 11 bottles of water in 30 seconds any less impressive.

Think of the weight alone, not to mention the massive inconvenience of having 11 bottles shoved down your jersey, poking you in weird places while you try to bend over and catch up with a speeding peloton.

If you thought what was going on in the race was mad, can you imagine what goes on behind the scenes.

Over the years we've heard of shady stuff going on behind the scenes at the Tour, but it seems that everything's very PC with the ORICA bunch.

Here are some lovely interviews and team reactions to Michael Matthew's stage 10 win.

Peter Sagan eat your heart out

Turns out there's more than one wheelie-popping maverick on this year's Tour de France.

Sam Bennet on Argon 18 is captured here pulling a wheelie on what we think was stage 9.

We wonder if Sagan'll respond to this clear encroachment on his territory, or perhaps we'll see some other riders join in.

Could we see Froomey in even more bizarre Tour de France situations in 2016?

The least aero rain coat ever

Using an umbrella while racing is inadvisable for a number of reasons:

2. You're losing every ounce of aerodynamism you've got

3. One hand on the handlebars won't keep you in complete control of your bike

It looks funny though.

Kriss Kyle wallriding at the Barbican

Kriss Kyle adding to the culture of the @BarbicanCentre https://t.co/En8PSYceZq

We're leaving the Tour behind now and heading to London where Red Bull rider Kriss Kyle's been bashing up the Barbican Theatre with his BMX.

This wall ride is pretty - how do they say? - gnarly.

How does a helmet handle a hydraulic press?

Fortunately, while coming off your bike might hurt, the amount of force from an impact like that pales in comparison to the 500 tonne hydraulic press you can see here.

We thought the construction helmet would've put up more of a fight though.

Riding up mountains on fixies isn't for everyone.

Riding down mountains on fixies also isn't for everyone.

These three riders clearly fit the bill, and appear to have a great time doing it.

Their names are Daniele Fonelli, Filippo Filippini, Andrea Thedy, and their use of the hashtag '#savethetrackbike" indicates that this was an exercise of passion.

No guard rails. NO GUARD RAILS.

This self-propelled rollercoaster doesn't look like its designed for the faint of heart, or the safety conscious.

1
Chris Boardman has sold his car and is working part-time at Halfords
2
How are the UK’s pop-up bike lanes being received?
3
Nairo Quintana hit from behind during training ride
4
“No excuse” – councillor slams motorists who drove on pavement to get round road closure as emergency infrastructure ignored in London and beyond
5
Near Miss of the Day 433: Police tell cyclist “We all have to share the road” after very close pass from lorry driver
6
Special-edition 25 year anniversary Shimano SPD sandals launched. Still comfort over style, then.
7
Apple Watch with cycling power estimation is a step closer to reality
8
Video: “…not got your licence plate” – Black cyclist stopped by London cop for "anti-social behavior" including not wearing helmet or hi-viz