Could Pokémon GO pose a safety threat to cyclists?

The augmented reality game, released in Australia, New Zealand and the US last week, could prove a big hit by bike - but is it safe?
by Laura Laker

Augmented reality app, Pokémon GO, was introduced in the US and Australia on Tuesday, and it’s already the No. 1 free app on the US iTunes App Store, with 5m downloads on Android.

Pokémon GO is an updated version of the ‘90s game, in which you seek out and capture Pokémon (compound of Pocket Monsters), train them and stage battles. The app uses your phone’s GPS to alert you to Pokémon locations, and digitally overlays virtual maps and Pokémon onto real world scenes from the phone’s camera.

While we don’t know when it will land in the UK, (the game’s developer, Niantic, has put the brakes on worldwide roll out because servers can’t cope with demand) we also don’t know how exactly people will set about finding the monsters, or how much attention they'll pay to their surroundings while doing so.

However, the early signs are perhaps telling. Within 30 minutes of the game’s release one American user broke a metatarsal after walking into a ditch pursuing a Pokémon.

The Pokémon GO website says: “For safety’s sake, never play Pokémon GO when you’re on your bike, driving a car, riding a hoverboard, or anything else where you should be paying attention”.

Although users are advised against playing while cycling, perhaps inevitably people are already using bikes to track down and capture Pokémon.

Or, as one Aussie user put it: “Catching Pokémon and bike riding at the same time – maximum efficiency”.

The user in question shared this video of himself playing Pokémon GO on the bike, with mixed success. He does crash, but it doesn’t appear he was distracted by the game at the time.

Another user posted an image of his  Pokémon GO bike setup, with the caption “I’ve waited 18 years to finally do this”. 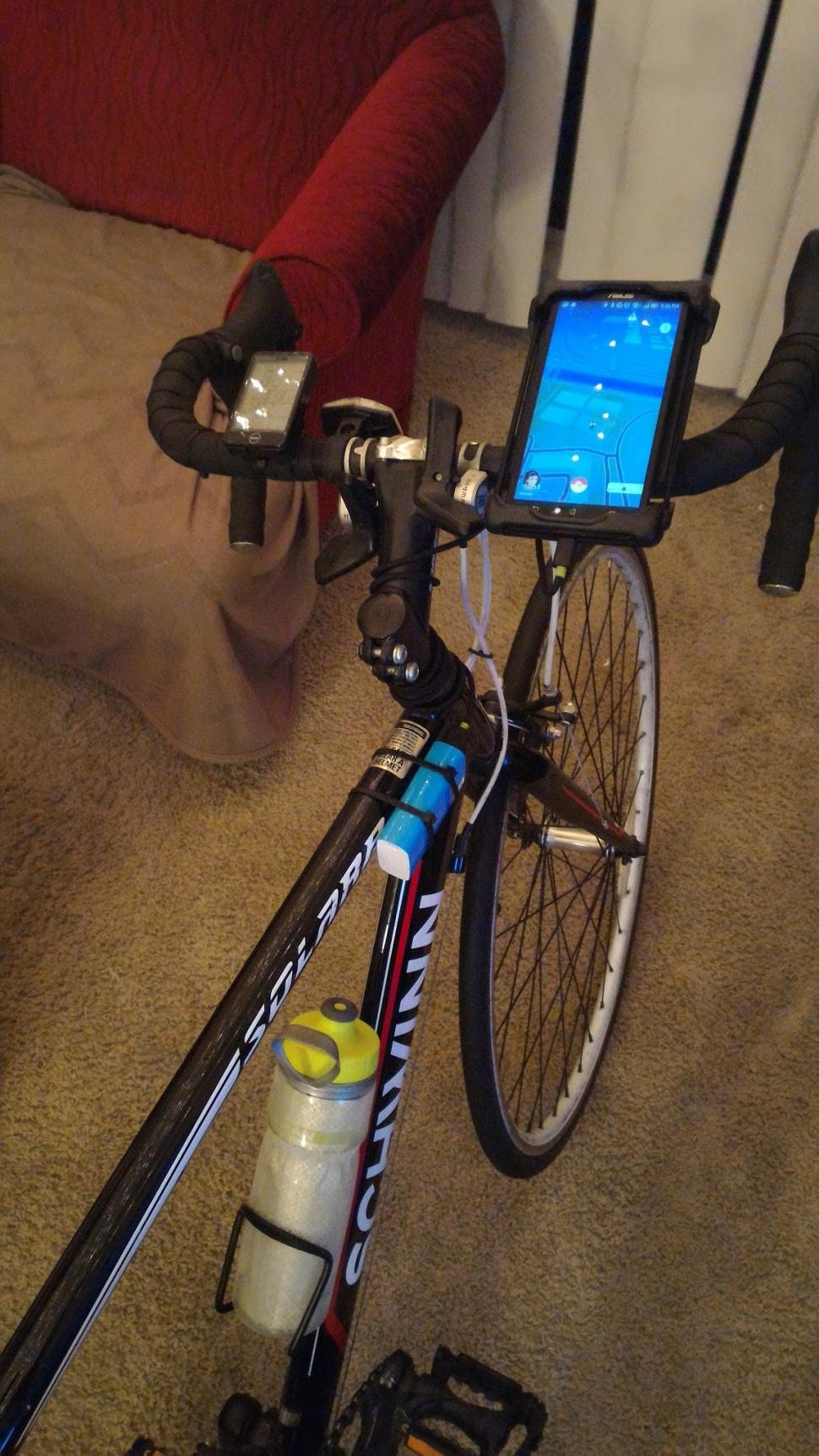 Some say cycling is the perfect way to catch Pokémon, and hatch the eggs, which requires you to be physically travelling – a minimum of 2km per egg, according to one user. With the speed cap for detecting the creatures set at 10mph cycling would seem preferable to driving or walking.

Of  Pokécycling one Reddit user said: “I don't think this is at all safe at any speed. If you're like me and constantly are tempted to look at your screen it's only a matter of time that you crash your nice road bike.”

“Flicking a pokeball while biking, he gonna catch-em-all kinds of injuries,” said one.

Another said: “I hit a pole while catching Pokemon, my right STI shifter is scuffed but I got the Pikachu so it's all good.”

While some have questioned how safe it is riding while checking your phone for monsters, perhaps we should be more concerned about distracted driving.

There are already reports of collisions happening due to motorists distracted by the app, with some collected in this post on Jalopnik.com.

I was sitting in my parked car when a van hit it. He was playing #PokemonGo and didnt see me. I too was playing. This game will kill us all.

Meanwhile, in the US, the Washington State Department of Transportation took to Twitter to tell people not to use the app while driving.

If your weekend includes looking for #Eevee on #PokemonGO, please do so safely. No Pokemoning from behind the wheel. pic.twitter.com/Kt9CmTOKiP

One enterprising soul has come up with a solution, for $10 per hour. 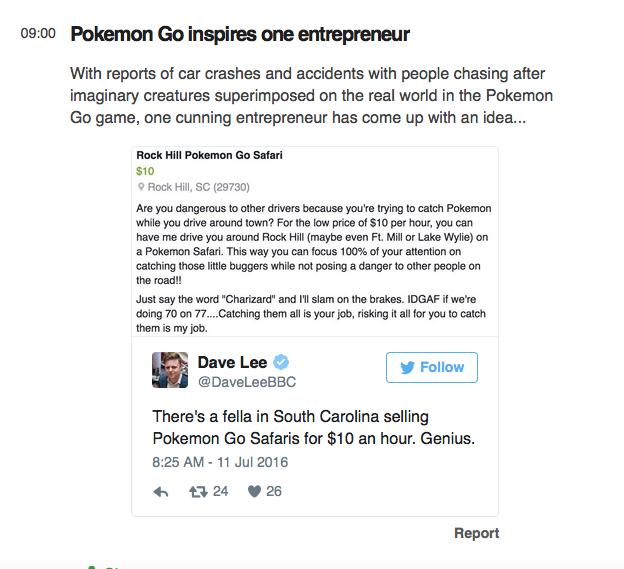 Meanwhile, Australia’s Northern Territory Police have warned users to take care on roads, after a “Pokéstop”, where users can restock on supplies, was planted in a Darwin police station.

Officers sent a good-natured message to gamers, saying they can catch the pokeballs from outside and don't need to come in.

“It's also a good idea to look up, away from your phone and both ways before crossing the street. That Sandshrew isn't going anywhere fast,” officers added.

(for what someone playing the game looks like from the outside, see below).

A spokesperson for Sustrans, the sustainable transport charity, said: “Our recent research shows that children today spend half as much time as their parents playing outside. Anything that gets people active outside, walking and cycling in parks is a bonus, as long as you only play when you reach your destination, not on your bike!”

Rules for safe Pokécycling, according to one player:

1.As long as you keep you speed below 15mph your phone can be set to vibrate when a pokemon pops up on the map. I feel this through my handlebars every single time it happens. This means you do not need to keep your eyes on the phone and you can focus on the road.

2.If/When your phone does vibrate, look around and check your surroundings, and make your way to the shoulder to stop. DO NOT JUST BRAKE WHERE EVER YOU ARE. I found that even if I stopped a good 15-20 feet away the pokemon would stay on the map and i would still be able to engage it from far away.

3.Once you come to a stop, get out of the way for other people/bikers. Get as far over on the shoulder, or onto grass so other people can use the path without you obstructing it. In reality, once you catch maybe 10 pokemon on your bike, it becomes super easy. Most of the time it takes me about 10-15 seconds to catch a pokemon and get back to the map screen. Thats plenty of time for someone to pass you and be inconvenienced by you blocking the path.

4.DO NOT ATTEMPT TO CATCH POKEMON WHILE RIDING! Im going to go ahead and admit to doing this once, AND ONLY once. its scary as hell to look down at the screen and when you look up you are a couple 100 feet away and you have no idea that bigfoot walked across the street to take the loch ness monster out on a date. /s you get the point

5.Turn off AR mode when riding, so you don't have to take you phone off the bars when trying to throw pokeballs at pokemon. This way you can just toss and throw since the app doesn't require use of the camera, making the Pokemon appear directly on your screen and not up in the air towards your right.

What is Pokémon GO?

If you haven’t heard of it, Pokémon GO is an augmented reality (AR) game in which you seek out Pokémon (compound of Pocket Monsters) in real world locations. A Pokémon Go app uses your phone’s camera to show real world scenes, onto which it digitally overlays maps and Pokémon characters. The characters tend to be in public parks and recreation areas. Players also collect supplies from Pokestops and can train their monsters in “gyms” – often parks or other open spaces – against other players’ Pokémon. It has been compared with popular AR game Ingress and, perhaps unsurprisingly, some of the same locations are used.

You capture the Pokémon for your collection by throwing a ball at them; the ball hoovers up the Pokémon and it’s yours – pretty much like it was in the ’90s.

You then fight battles using the captured monsters, and can form teams with friends and claim locations for the team.