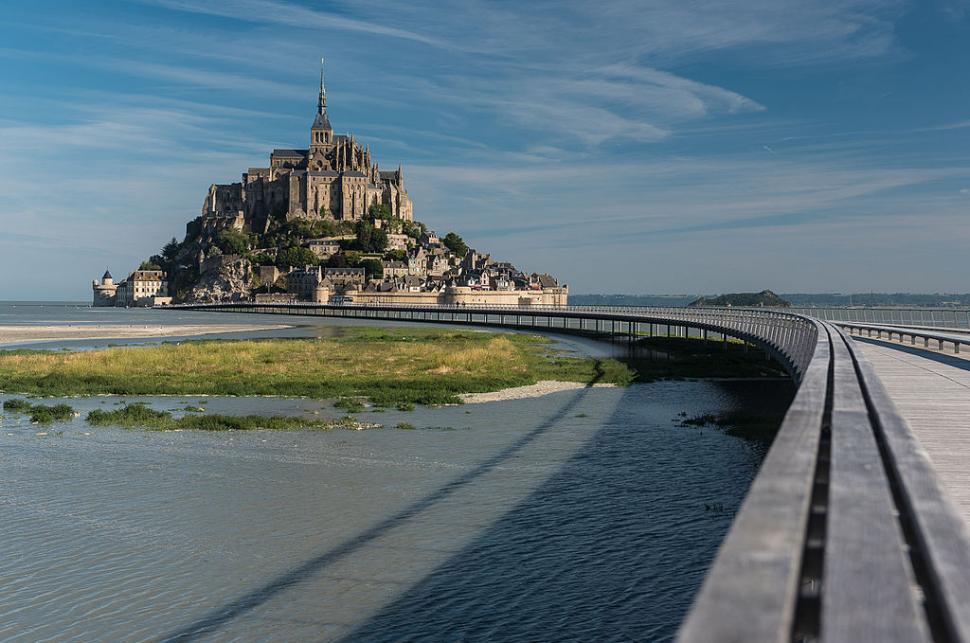 Mont St-Michel provided a spectacular backdrop to the start of Saturday’s opening stage of the Tour de France, but if that’s inspired you to head to Normandy with your bike, be warned – they’re not welcome at what is France’s most visited tourist attraction outside the Paris area. One campaigner has called it "the least cycle-friendly place in France."

France’s body that administers the country’s national monuments has used the Grand Départ to encourage even more tourists to visit the island and its abbey, which already welcome around 3 million people a year.

But as Le Monde reports, during peak tourist season from the start of May to the end of September, bikes are banned between 10am and 6pm on the bridge, opened in 2014, that now links Mont St-Michel to the Norman coast.

That project was accompanied by the building, on the mainland 3km away from the island itself, of a car and coach park, with visitors required to walk across the bridge, or use shuttle buses or horse drawn carriages – but not bicycles.

Moreover, any tourist arriving by bike has to leave it at the car park, and is required to pay the same fee - €11.70 for 24 hours – they would have to fork out had they turned up in a motor vehicle.

The 50 or so people who live on the island, as well as those who work there, are exempt from the restrictions, but have to ride on the pavement, creating conflict with pedestrians.

One resident who uses a bike as her sole mode of transport, Inès Lebrec, rejected suggestions by the local authority that there was no space for bike parking, and highlighted the demand for it.

She said that wasn’t just from people from afar – Mont St-Michel is on three major cycle routes, including Eurovelo 4 which runs from Ukraine to Italy – but also “local people, inhabitants of Brittany or Normandy, who take advantage of Sundays in the spring to go for a bike ride locally.”

That’s something that can also benefit the owners of the restaurants and souvenir shops on the island, with a report on bike tourism from the French government last year finding that cycle-tourists spend more than the average person, with an outlay of between €64 and €105 a day.

Ahead of Saturday’s Grand Départ, Jean-Michel-Blanchet, who heads local cycling campaign group  Velocité, said that while a ban on bikes may be needed in July and August, there was no reason to ban them at other times of the year.

“This is a problem for locals who go to work by bike and also for tourists on cycling holidays,” he added.