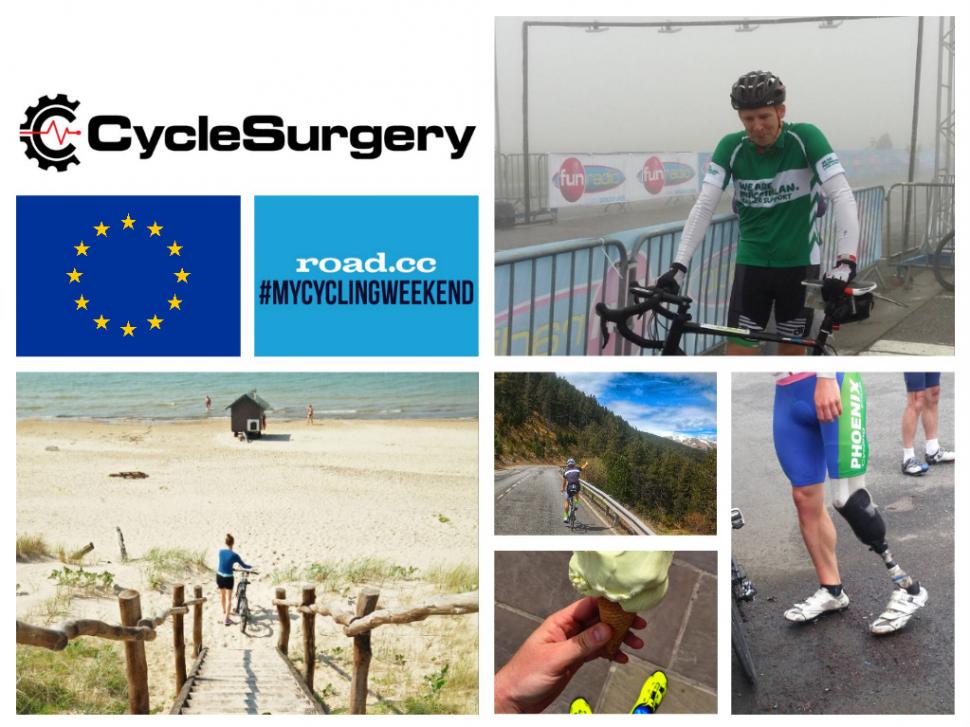 #mycyclingweekend: Leave the Brexit behind

You lot took to two wheels to take your mind off Britain's exit from the EU - here's how it went!...
by Elliot Johnston

For about half of the UK population this #mycyclingweekend was a difficult one. For the other half it was business as usual, except maybe with an optimistic smile on their faces. Neither us road.cc-ers or the folks at Cycle Surgery are interested in how you voted, we just want to see your cycling photos!

Cycle Surgery even offered what we imagine to be a consolidatory prize, or an extra reason to smile, this #mycyclingweekend in the shape of a £40 Lezyne Floor Drive track pump.

We kept our distance from a theme for your entry photos this weekend, and asked you just to send us photos of your ride. You did. In your hundreds. And we saw some stunning photos of great rides in the sun, the rain, and the fog.

Choosing a winner was difficult, but we just about managed it.

For going to the most extreme lengths to not think about the Brexit this #mycyclingweekend, and also for his incredible feat of endurance and resiliance, this week's #mycyclingweekend winner is Instagram user nemovelosolo who was raising money for Macmillan Cancer Support.

Nine hours of cycling, 4.5km of climbing over a grand total of 170km during the Ariegeoise XXL sportive in the Pyrenees must take it out of you. You deserve your prize this week nemovelosolo, congratulations.

At the finish of the Ariegeoise XXL on Plateau de Beille. It was emotional. 170km, 4470m climbing, 9 hours. They were clearing away the advertising by the time I got there. #NeverQuit #MacmillanCancerSupport #MyCyclingWeekend #CycleSurgery #roadcc

One of our entrants had a very topical ride. Joe McTagg was rolling around Luxembourg, specifically Schengen - where the freedom of movement in Europe agreement was signed in 1985.

He was one of very few #mycyclingweekenders who were unsuccessful in the disengagement from the referendum.

Third country on today's ride with a beautiful starry blue sign at the border EU <3. Thanks to an agreement signed in this town I can hop around easily. A beautiful thing, really. #freedomofmovement #mycyclingweekend #stravadventure

The rest of you found escape in a number of different ways.

From ice cream to beach days, from incredible scenery and weather patterns to Banksy and swimming in flooded areas, it looks to us like most of you were very successful in enjoying yourselves this weekend.

Below are a selection of our favourite snaps from this week, and as we remind you every #mycyclingweekend it's never too late to get involved. If you want to send us your photo to be included in next week's articles, simply pop a photo on Instagram or Twitter with the #mycyclingweekend hashtag clearly attached, and we'll see it.

How would #cyclists check themselves out if it weren't for shop windows? #vanity #bikelife #stravacycling #cycling #italy #tuscany #mycyclingweekend #instabike #igerscycling #sockdoping