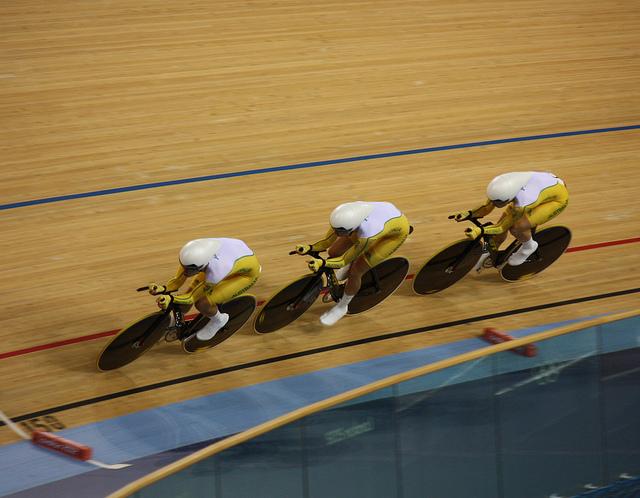 If you thought British Cycling already had enough trouble and controversy to deal with, think again. The Aussies have turned our own against us by using a British motorsport engineer in a $1million scheme to help them get ahead before the Rio Olympics this summer.

Cycling Australia has been scrambling for a key to cycling success over last four years since being thumped EIGHT gold medals to one by the Great British at the London Olympic Games in 2012.

The High Performance unit of Cycling Australia performed a full-scale review of the cycling program after their disastrous Olympics performance in the UK, and later committed $1million towards solving their problems.

Their choice of personnel for this project which looked to find every possible track advantage, included British motorsport engineer Andy Warr.

Warr was hired by Cycling Australia in 2014 to perform full body analysis on every Australian rider, every component of the Bicycle Technologies BT Ultra bikes they're set to ride in Rio, and all of the team's equipment too: helmets, shoes, and skinsuits.

The resulting package was presented to the riders last Monday, which means Warr's treachery is complete.

Talking to the Herlad Sun newspaper, Warr - who had been working in electronics and performance analysis with Le Mans, sports and touring cars before getting in bed with the Aussies - spoke of his commitment to the Australian cause.

He said: “My goal is to win medals for Australia, that’s why I’m here,” Warr said.

“I’m very emotionally attached to this now, it’s a lot of hard work over the last 18 months, a few sleepless nights.”

Obviously, should the Aussies beat the Brits at the Olympic games in August, it would be unfair of us to hold Warr and his allegiance switching completely responsible.

There are plenty of other factors that are bound to effect the performance of both sets of riders.

For starters, all has not been well in the British Cycling camp. Shane Sutton's incongruous exit cast a shadow, as did the exclusion of 2012 Olympic gold medalist Dani King from the final squad to travel to Rio.

>Mark Cavendish set for Rio, but Dani King to miss out

Equally, Australia have seen a massive boost in their cycling funding from the Australian Institute of Sport (AIS), and Cycling Australia's high performance manager Kevin Tabotta told the  that the AIS assistance has had a positive impact on Australian chances this time round.

He said: “We went to the AIS with a plan and said ‘this is where we feel we need to bridge the gap’, is there any way you can assist us?”

“The assistance we got from the AIS has been huge and that’s over a three-and-a-half year period.

>Have the wheels come off for GB cycling team?

Here at road.cc we've filed away Warr's switch to the dark side. We will either herald him as a double agent should we win, or pop him in the scapegoat box should the Aussies come up trumps August.