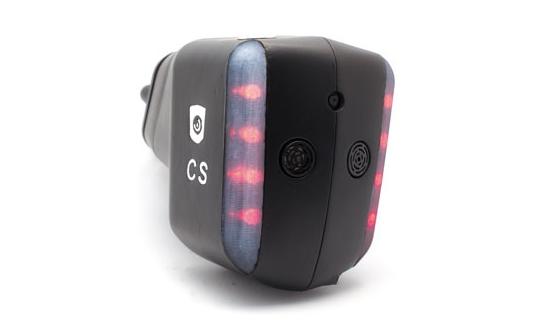 A company based in Bath will this week launch a Kickstarter campaign that aims to raise £500,000 to bring to market a “passive safety” device called CycloShield aimed at reducing the danger to people riding bikes on the road.

The team behind the start-up business, which attaches to a bike’s seatpost, say it has three key features aimed at improving the safety of cyclists – “threat detection, offenders recording and SOS.”

They claim it can “detect the approach or threat of another vehicle and perform actions about it,” as well as notifying users of roads where there is an increased risk of being involved in a collision.

A camera within the device captures footage of vehicles, enabling incidents such as close passes to be recorded.

In the event of a crash, the device can notify an “In Case of Emergency” (ICE) contact as well as alerting the emergency services with the rider’s GPS location with the aim of reducing emercency response time.

It comes with integrated Bluetooth and Wi-Fi, and is claimed to be “compatible with the majority of activity monitors and mobile applications on the market.”

As with any Kickstarter project, a variety of rewards are on offer depending on the size of the pledge, but to be eligible for one that includes the CycloShield device itself requires a minimum investment of £299 for the Super Early Bird package.

The Kickstarter campaign can be previewed here.