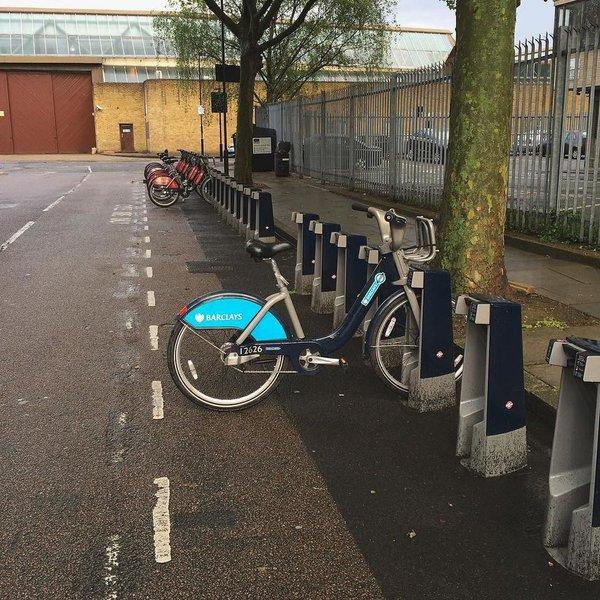 On New Year's Day 2015 someone hired bike 12626. It was returned yesterday (the giveaway being the Barclays livery, not seen in London since early 2015)...
by Laura Laker

The man who found it dubbed it the Kimmy Schmidt of Boris Bikes.

It was hired in the early hours of New Year’s Day, 2015 – 1.12am to be precise, and returned yesterday afternoon at 5.34pm -  a year and a half late. The hire date may go some way to explaining the 'mystery' of why it's been away so long.

Bike number 12626 might have blended in with all the other bikes had it not been for the fact it bore the livery of former scheme sponsors, Barclays Bank. The bikes were all re-branded red in February 2015 when Santander won the £44m sponsorship rights, leading Tubb to wonder where the bike had been in the meantime.

Putting aside the £300 fine the midnight reveller would have clocked up since renting the bike that fateful New Year’s Day, we can’t help but wonder what the person was doing with number 12626 for the past 18 months.

We may never know the answer to this question. Did it cycle up Mont Ventoux? Decide to take a trip on the epic 3,000km Kerala Express train line bearing the same number, 12626? Maybe it was just languishing in someone’s garden. Or perhaps, just perhaps, it was held captive in a bunker and made to turn a wheel with no apparent purpose for hours on end.

Or perhaps it ended up in Gambia.

Boris Bike turns up in the Gambia - almost 4,500 km from London

Tubb told road.cc: “I saw it on Ada Street near Broadway Market, it was there yesterday evening and still there this morning. Not sure if it's still there. Pretty bizarre - most of the bikes were changed over from Barclays to Santander last year, so who knows where it's been!

“I haven't [used the cycle hire scheme] for a while (I have my own bike) but I have a key fob and use them from time to time when it makes sense to - yesterday was the first time I'd had to in a while.

“I had just finished my journey (I was travelling to Broadway Market), but I'd have absolutely used it otherwise!”

According to Transport for London, the city’s hire bikes do go missing from time to time, and many are reported by helpful members of public. A spokesperson for TfL told road.cc someone once spotted a bike in someone’s garden from a train and sent them the photo, while people regularly report unattended bikes left away from docking stations.