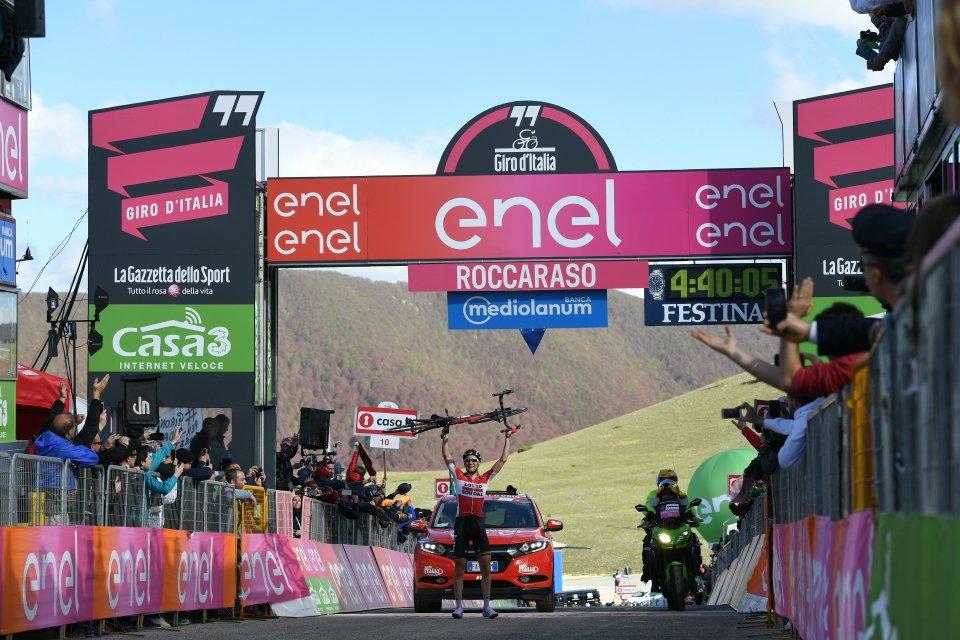 Tim Wellens of Lotto-Soudal has won the Belgian WorldTour team its second successive stage of the 99th Giro d’Italia, attacking from the break with 15 kilometres left to cross the line in Roccaraso more than a minute ahead of his closest pursuers on the first summit finish of this year’s race.

Behind him, the battle for the overall title began in earnest with Astana’s Vincenzo Nibali, winner of the race in 2013, launching an attack with around 3 kilometres remaining of the 157 kilometre stage from Ponte.

The Sicilian was quickly brought back but immediately it was race leader Tom Dumoulin of Giant-Alpecin who managed to break away, the Dutch rider finishing fourth today and extending his overall lead by 10 seconds.

Astana’s Jakob Fuglsang and Katusha’s Ilnur Zakarin were second and third respectively, both 1 minute 19 seconds down on Wellens, and move up to the same positions overall.

Wellens, whose victory comes 24 hours after a dominant performance by team mate Andre Greipel to win Stage 5 in Benevento, said: "I have Pim Ligthart to thank. It was his idea to go away together at that point in the race. Then we bridged the gap to the leaders.

“I had good feelings today so I could maintain a good pace alone at the front on the final climb. I'm enormously happy with this victory. It's a little bit of a surprise. I'm happy that no team rode behind us.”

Following the stage, Dumoulin, who now leads the race by 26 seconds, said: “My attack was not planned but I saw Nibali going so I went too. There was only one opportunity and I took it.

“I really surprised myself. I was stronger than I expected. I didn't think I'd be in that shape for climbing. It was not a high mountain but it was still a proper climb today,” he added.