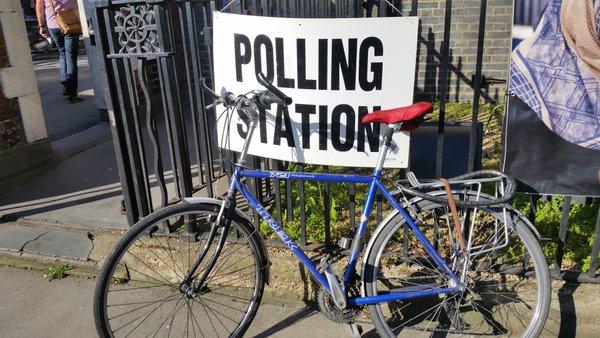 Today has been polling day across the UK – for local councillors, mayors, police and crime commissioners and for the Welsh and Northern Irish assemblies, as well as the Scottish parliament.

This being 2016, there’s been a hashtag on Twitter today – #bikesatpollingstations – started by the account @Londonersonbikes highlighting people who got to the polls by pedal power.

It’s been trending, and here’s a selection of the tweets.

Oh, and #dogsAtPollingStations was trending too. Some people had to make the decision between four legs or two wheels.

Leader of the Opposition Jeremy Corbyn was among those who cycled to the polling station to cast their vote. Of course he did. And you’ll never guess which way he voted.

Islington councillor Caroline Russell, who is standing for election to the London Assembly for the Green Party, also tweeted a picture.

While we’re glad to have spotted one of the Cyclists Stay Awesome stickers here, remember that voting is, too! And if you're reading this story just after it's been published, you still have around an hour.

I'm tweeting this again. Get out and vote people. It's a lovely sunny day! pic.twitter.com/9UQjwose1J

And finally ... there’s always someone who missed out. Next time, eh? For that referendum next month, perhaps?