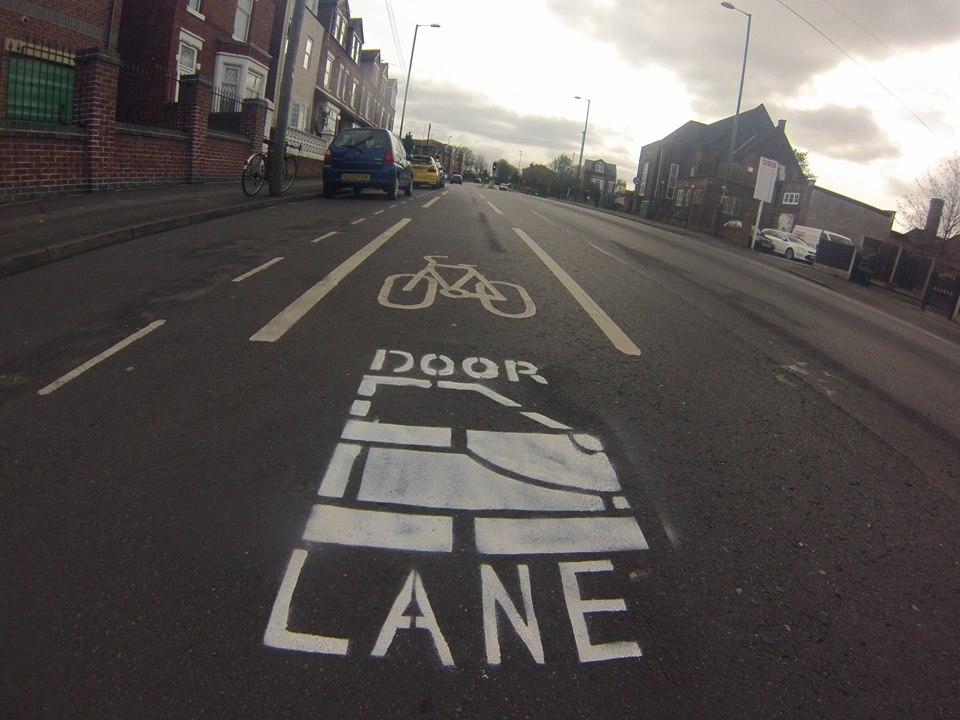 The words "door lane" have appeared in white stencilled paint on one cycle lane next to parked cars on Haydn Road, Nottingham...
by Laura Laker

Bike lane graffiti has once again appeared on Nottingham streets calling for better cycling infrastructure, this time dubbing a bike lane a “door lane” because it runs alongside parked cars.

The words, and an impression of a car door, were stencilled on a painted bike lane on Haydn Road, Sherwood, which runs alongside car parking bays.

This is the latest in a flurry of similar white stencilled graffiti to appear on Nottingham roads in recent weeks, with “unsafe bike lane” and “cyclist priority” appearing on cycle routes during one week in March.

In a discussion on the local Critical Mass Facebook page one user, Luke Powell, wrote: “I live around the corner, these cycle lanes are some of the worst examples of cycle lanes I’ve ever seen, massive waste of money.”

“Taking money out of future pointless and dangerous lanes is probably a saving grace until we can have cycle lanes designed by cyclists with an understanding of safe and useable infrastructure,” he said.

Michael Metcalfe, who said he has a trike which he can’t use on many bike lanes as they are too narrow, disagreed with the use of graffiti to make a point. He said: “Some valid points regarding design aspects of the cycle lanes but, this isn't protesting, it's vandalism”.

Dooring is the verb used to describe a situation where a passing cyclist is hit by someone opening a car door. Bike lanes positioned near to parked cars are often criticised for putting cyclists at risk of being doored.

In response to earlier graffiti Nottingham City Council defended road safety and pointed out £6.1m is being spent on cycle improvements in the city.

A Nottingham City Council spokesperson said in March: "We will be removing this graffiti as it could confuse or distract motorists, which would be dangerous. We would also strongly discourage anyone from painting graffiti on a road as they are putting themselves and others at great risk."

Work started on Nottingham’s "cycle superhighway" in October, one of a number of cycle routes being introduced across the city as part of £6.1m Cycle City Ambition Fund money from government.