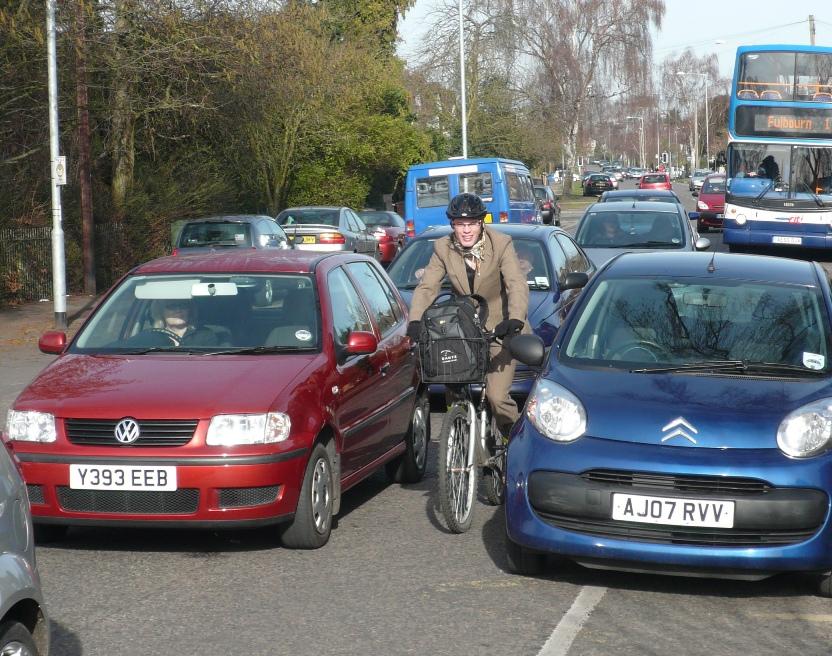 A hotly disputed cycling safety scheme for Cambridge goes before councillors next week.

In an attempt to stop cars parking on a cycle lane along the busy Gilbert Road, Cambridgeshire County Council officers are recommending widening the existing cycle lane from 1.3 to 1.7 metres and adding double yellow lines to prohibit parking in the cycle lane and on the verge. A traffic calming scheme using speed cushions and raised tables would also be included.

The measure has been backed by cyclists and nearby schools, but it’s been opposed by some residents who are concerned about the loss of parking spaces on the road. One of them, Doctor Henry Tribe, told the Cambridge News, “I’m not against cycling by any means – I’ve cycled all my life. But I and many other residents are against the changes being proposed. In my view, the speed humps and speed cushions being proposed are completely over the top.”

Residents in some neighbouring streets have also objected because of the fear that displaced traffic would use their roads instead.

Klaas Brümann of the Cambridge Cycling Campaign, said, “The measures are I understand in compliance with DfT guidelines and supported by Cycling England but a resident calls them over the top. I suppose it depends whether this resident on this 3/4 mile long and unusually wide road for Cambridge cares about speeding traffic in an area with four schools attended by 1800 pupils.”

Surveys found about 20 vehicles are parked in the Gilbert Road cycle lanes at any time, with a concentration at the Milton Road end. Some of these are believed to be cars belonging to commuters rather than residents or their visitors.

Roy Pegram, cabinet member for growth, told the Cambridge News, "We have listened carefully to local residents and cyclists over this issue and I am sure this will be well debated at cabinet. It is incredibly difficult to meet the needs of all groups while reducing congestion for the city. We will again look closely at all the arguments before making any decision."

The authority's cabinet will decide the matter next Tuesday (15 June).

The Cambridge Cycling Campaign has published an online gallery of photographs showing what cyclists are up against on Gilbert Road.