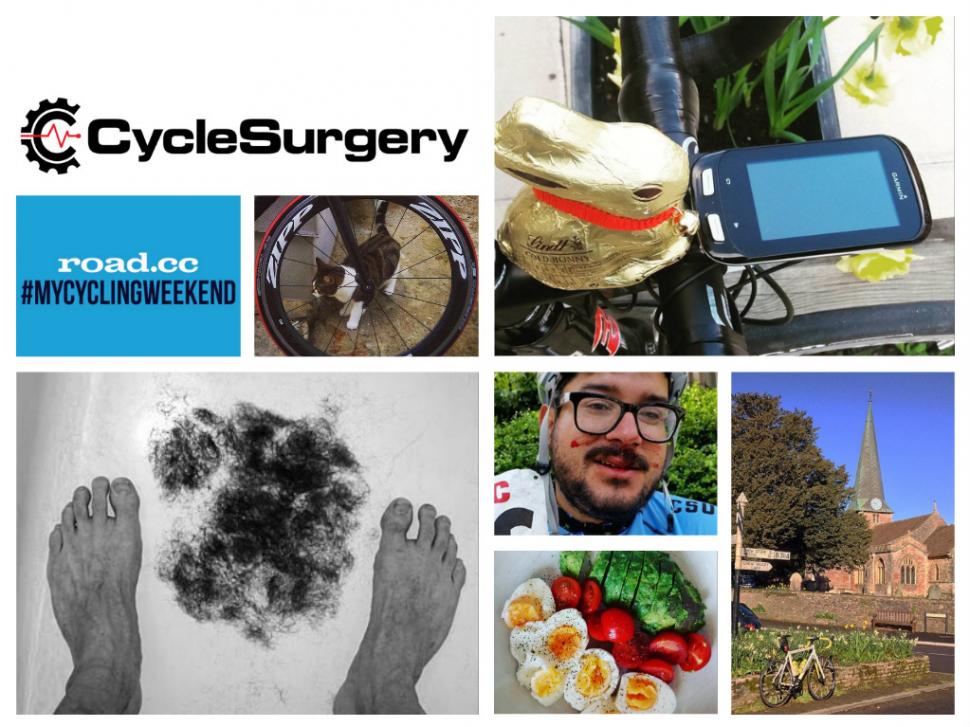 We hope you had a great Easter! We hope that you're not feeling too down being back at work after such a long #mycyclingweekend. Perhaps our friends over at Cycle Surgery can help you feel a bit better?

Once again, we were running a #mycyclingweekend competition - fire over your most Easter-y photos, and win a cycling care package.

You had plenty of inspiration to choose from. We outlined it in the pre-weekend piece. Hot cross buns, daffodils, beautiful spring weather, chocolate eggs, even bunnies count as Easter-y, and you certainly had access to the lot of them - we saw!

Anyway, as has become tradition here at road.cc we've got to sort through the photos, find a way of justifying a choice of favourite - which is by no means an easy task - and dish out one of the fantastic prizes that our friends over at Cycle Surgery are offering you guys.

This weeks prize of a cycling care package - featuring Muc-Off, Science in Sport, Le Coq Sportif, and Orbea products - had to find a home, and it had to find a particularly Easter-y one.

When we applied our Easter criteria, it was an easy decision. Sam Khamtonwong, a regular #mycyclingweekend contributer via Instagram, sent in a photo featuring chocolate, bunnies, daffodills, spring sun, and a Garmin Edge...

Of course, it was the Garmin that tipped the whole ensemble over the Easter extravenganza edge.

Congratulations Sam, if you fire over your address to the email we've attached to your photo, we can get those prizes sent your way!

Sam's photo wasn't the only piece of Easter spirit in photographic form that we received.

Joe H on Instagram had eggs for breakfast, loads of you encountered the particularly spring-y weather and the thousands of daffodils that appear to be adorning our country lanes at the moment.

But, it was German Sanchez who got a little too in the spirit of this eggy holiday. We told you to have a cracking weekend, we didn't expect you to take it literally - hope your face is alright German!

Below is Joe's egg-filled breakfast and the huge selection of stunning daffodil shots that you all sent in!

We were dissapointed by the lack of real easter bunnies you guys sent in - other than Sam Khamtonwong chocolate rabbit that opened proceedings today - but this #mycyclingweekend wasn't critter free.

Tom Bangay had a helping hand during his pre-ride set up from his cat, who we framed beautifully in this shot.

Twitter user Nugget48 also looked like he had a run in with a critter, until we actually read his tweet and took a closer look at the photo.

It's safe to say that this shot was our favourite non-easter photo of the #mycyclingweekend. Have any more of you started shaving away your layers of winter insulation yet?

First ride of the year in shorts so first this had to happen, natch. #mycyclingweekend pic.twitter.com/LCX2dj37Pl

There were plenty more of you who didn't fancy getting in the Easter spirit but still rolled out and had a fantastic time riding in some stunning weather - special mentions to our very own Dave Atkinson and Jez Ash who spun out on a big-tyred adventure bike blast that looked, well, like a blast!

Went out with big tyres to find unexplored lanes#mycyclingweekend pic.twitter.com/PMYpTpSXxa