Life's a Picnic at Brooks: Part 1

New products from Brooks, sandwiched between a factory tour and cycling to a picnic tea in a very necessary rain cape
by nick_rearden

Brooks, the traditional leather bicycle saddle maker based at Smethwick in the West Midlands hosted a picnic ride for an international group of journalists on Tuesday. Although there was indeed a (soggy) bike ride, a (gloriously sunny) picnic - mmm cake - and some tasty new leather products to announce, the main point was to show the saddles themselves being made by hand at the factory.

It seems that according to Brooks not enough cyclists realise that the saddles really are made by hand, from real cows, in a little UK factory that's been in operation since 1866. Certainly, the writers from Japan, Korea, the USA, Canada, Germany, Holland (we get the point - ed) seemed impressed with the sheer hands-on-ness of it all. And Brooks didn't miss the opportunity to talk about the sourcing of leather - only entirely naturally and slowly raised cows produce the 5mm thickness required for durability and that there's too much barbed wire and super-thorny bushes around American cows for their hides to remain undamaged enough for these leather buyers. It's pretty much European cows all the way for Brooks.

Speaking for ourselves, we had been more than prepared to give Brooks the benefit of the doubt when they'd said over the years that skilled artisans hammered copper rivets to secure fussily-selected cowhide to a luxuriously sprung chassis - we'd even seen the pictures - but it came as a surprise that not only are leather workers' skills bought to bear but a whole array of noisy cutting, stamping and metal-bashing machines directed at raw steel sheets and rods to produce all those important chassis parts inhouse. 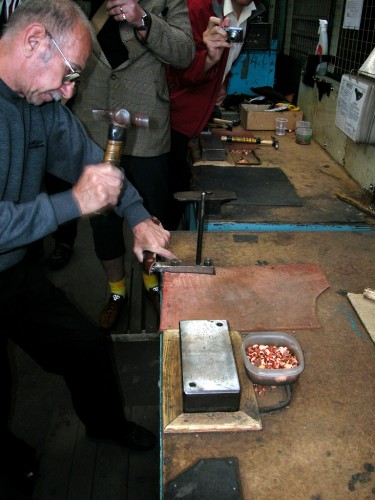 We don't know where we imagined they came from but are now under no illusion that not only is every last piece made in Smethwick but that they're all sitting there in stock awaiting the emergency call years hence when a spare part is needed. "What we call a saddle for life," according to Steven Green, who has worked at the Brooks factory for 32 years. "Cyclists have been known to turn up at the factory door needing an ancient saddle to be fixed. They don't get turned away."

When we expressed surprise that some of the saddle makers are rather young considering the old-school skills on show, Green said , "Ten years ago we found it quite hard to find good recruits. Now, it's become quite a cool place to work".

Over the last few years the establishment has gradually increased from 22 to 30 as more people appreciate the benefits of a nice saddle and sales increase. "Yes, it's relatively expensive but apart from the long-term comfort, there is less of a willingness these days to just chuck away and keep buying new." according to Steven Green.

The new items are mostly found in the area of Brooks luggage which we'll talk about in Part 2. While we're on saddles, though, we'll mention a big change which is the introduction of a whole new leather source - the actual cows in this instance come from Sweden - where the tanning process is entirely vegetable-based and with no additional colour. The result is a softer, velvety surface texture and a paler, creamy tone to that we're familiar with and it's being introduced as an option called 'Select' on men's and women's 'S' versions of the B17, B67 and Flyer models as well as road.cc's personal favourite, the Swallow racing saddle.

And while we're on the lovely Swallow, this racers' favourite will now come with large copper, hand-beaten rivets on the new natural-coloured 'Select' option. This is bound to be popular although we still think it's peculiar that this full-on racers' model comes with saddle bag loops whereas the beautiful new/old Colt that we wrote about in April and ideal for long-distance, heavier riders, doesn't.

For flat-bar bikes, we love the new slimline, lightweight aluminium grips with replaceable padded leather tape. A circlip-secured blanking disc is removable to facilite fitting bar-ends and the grip is secured with a secret Torx fitting. Tidy. You're going to want a pair. 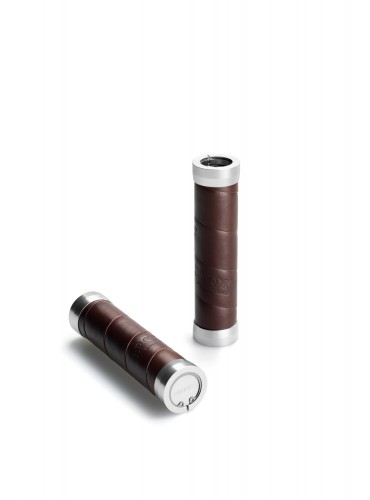 It appears that henceforth and due to there being another Brooks in the endeavour of sporting clothing, any cycling garments from the company made famous by leather saddles will now go by the brand name John Boultbee, the first two names of the founder and at whose original house we held our home-made Victoria Sponge picnic.

The first John Boultbee product will be the Oxford rain cape that achieved a far wider and more gratefully-received introduction than it might have done. We never thought we'd be glad to wear such a thing but the precipitation on our picnic ride was everything you'd expect from a sporting occasion in England and the new cape made the experience perfectly intrepid.

Apart from being nice to touch and properly waterproof, clever features were magnetic catches for the handlebar attachments and, something that I hope we see a lot more of, reflective material woven into the fabric in a way that doesn't detract from the daytime appearance. 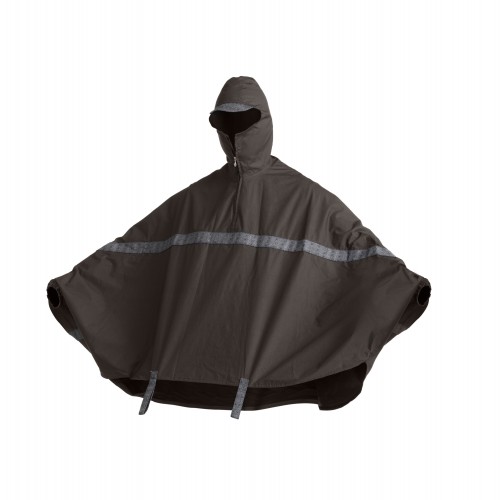 Stand by for Part 2