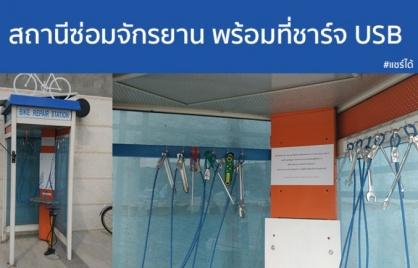 Thai officials have scrapped plans to remove around 4,000 phone booths around the country and come up with an altogether more heartwarming plan - turning them into bike repair pitstops.

Plans were to remove thousands from Bangkok alone, but a creative approach has been to turn them into repair stations, marked with a white bike sign on top and including a full set of tools, from pumps to adjustable and hex wrenches, screwdrivers, bike hangers, as well as a 12-volt USB port for charging battery equipment or your phone.

There are currently five of these booths around Thailand, with four in Ayutthaya and one in Bangkok, but the plan is to launch 20 stations around the country by the end of the year. They also aim to install Wi-Fi in the booths in the near future.

Running on solar power, every booth is open 24 hours a day and can be used for free.

Thailand has not always had the best reputation for cycling.

Last year we reported how a cyclist who was attempting to set a record on his round the world trip was killed on a Thai road this week, in front of his wife and two year old son.

Juan Francisco Guillermo, 47, had embarked on a five year, 155,000 mile journey in November 2010 and was just nine months away from finishing when he was hit by a pickup truck and killed instantly.

According to a recent study from the University of Michigan, Thailand has the second-highest traffic fatality rate in the world, with 44 deaths per 100,000 population.

The only country with roads deadlier than Thailand’s was Namibia, which had 45 deaths. Iran was ranked just behind Thailand with 38 deaths, according to researchers at the University of Michigan Transportation Research Institute.