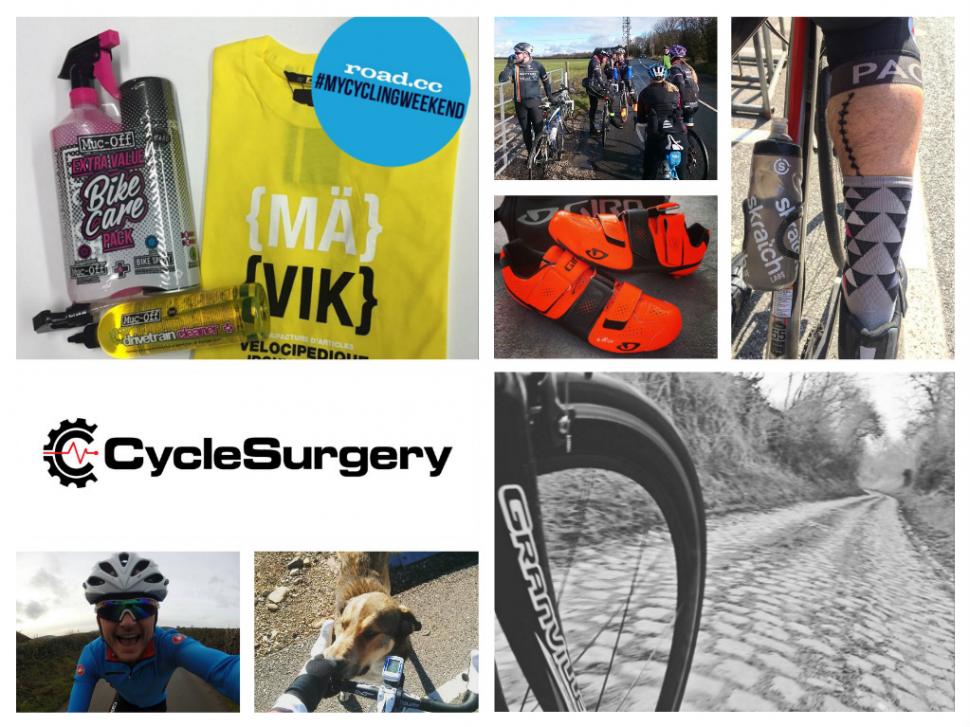 Cycle Surgery bring prizes and more to this week's #mycyclingweekend - send us your photos to win!...
by Elliot Johnston

Thank God it's Friday! You're about to head home to two days of hopefully uninterrupted potential cycle time. And the road.cc #mycyclingweekend in fantastic association withCycle Surgeryis here to make your weekend even better!

There isn't a whole lot anyone can do to improve on a weekend featuring perfect weather, a beautiful long bike ride, and that adrenaline fueled euphoria you feel after a great day in the saddle, other than reward you for a #mycyclingweekend well done!

That's right, we're offering you a prize for riding your bike! Thanks to our fantastic partnership with Cycle Surgery, and in conjunction with their quest to find out exactly #WhyWeRide, we're giving away a package of cycling goodies including a Mavic t-shirt and Muc-Off bike cleaning bits to the best photo of the weekend!

All you've got to do to win the fantastic bundle - which you can see below - is fire over a photo of you this #mycyclingweekend giving us some idea as to why you ride.

We'll fill you with inspiration below, but before you then we must remind you to include both the #mycyclingweekend hashtag and the #cyclesurgery hashtag in your post, otherwise you won't stand a chance of winning!

Without further ado, here's a sneak peak at the Muc-Off Drivetrain Cleaner and Bike Spray, as well as the marvellous Mavic tshirt you could win this week:

To win, however, you'll need to take a great photo.

The winning photo for a competition like this won't necessarily go to the cyclist with the best eye for a photograph, so if you've never had any training, or you're not particularly clued up on light levels and exposure, don't worry!

To win, we just want you to capture why it is you ride your bike every #mycyclingweekend. Whether it's the friendships you make on the road, like Instagram user Adrian Rodriguez below, or if it's  new bits of kit that get you going, let us know.

Alternatively, it might be the exertion, the pain, and the deep satisfaction you get from completing a really hard ride that gets you out of bed on a Saturday morning.

Both of the next two photos, from Stephen Hendrikx and John Argueta over on Instagram, show different kinds of suffering. Stephen's decided to take the cycling season the way it ought to be taken this #mycyclingweekend, over cobbles, and John's chain-marked calf shows either a commitment to cycling that runs deeper than skin, or he's pushed himself and his bike so hard that the two became one briefly.

If it's the latter, John, we're glad your beautiful socks came out unscathed.

Finally, you might be riding simply for the fun. Mat Acton's certainly been having a good time, and Si Porter and co appear to have made the most of some of the stunning spring weather this week.