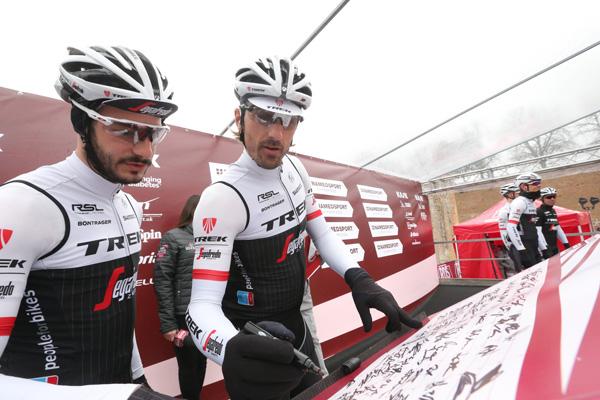 Fabian Cancellara, who on Saturday won Strade Bianche for the third time, says he is going to buy himself a bike with a motor – but only once he retires from racing at the end of this season, and to help him keep up with his wife when she rides to the shops on her own electric bike.

The Swiss rider, four time world time trial champion and an Olympic gold medallist in the discipline, winner of seven Mounuments, and wearer of the leader’s yellow jersey in several editions of the Tour de France, made the comment in an interview with L’Equipe’s Gilles Simon.

Their wide-ranging discussion in Portugal last month covered topics including  how the 34-year-old plans to spend his time once he stops racing later this year as well as what the Trek Factory Racing rider considers to be his career lows.

The latter, unsurprisingly, include the accusations that his 2010 Tour of Flanders win, when he destroyed Tom Boonen on the cobbled climb of the Kapelmuur and rode away for an emphatic solo win, had been achieved with the help of a hidden motor.

That episode has been back in the news recently as, almost six years on, a concealed motor was found by the UCI for the first time in a bike at the Cyclo-cross World Championships in January at Zolder in Belgium.

Referring to that 2010 victory, Cancellara insisted to Simon, “There was no motor.” But he said that the suspicions raised after his wins at Flanders and Paris-Roubaix that year had come as a “slap in the face” to him.

“I only did what I wanted to do most; to give my best, and go just that. I attacked at the right time, then – boom – I found myself in the middle of this story. I thought, ‘What a shitty world’.

“Back home, I sat in my armchair, a glass of wine in my hand, the bike beside me. And right there I said, ‘Fuck you guys!’

“The bikes I’ve won races on, they’re all at my home, they’re like trophies. I have 30 of them, I’ve got nothing to hide.

“So I decided to look at things from the other side, to see the positives. When I realised that thousands of people had watched videos of my attacks, I said to myself, ‘Wow, I’m really popular’.

“And I took it as a compliment that people might think I need a motor, because the motor I have in my legs. Sometimes, when I’m having a bad day racing, I’ll tell the others, ‘Shit, my motor is broken.”

Cancellara said that crashes, such as the one in Richmond Park during the London 2012 Olympic road race when he was in the front group and feeling “100 per cent,” or the one last year while leading the Tour de France, had affected him more.

But he saw the darkest point of his career as coming after the German rider Stefan Schumacher tested positive for EPO-CERA at the 2008 Tour de France and the Beijing Olympics later the same year, an episode he maintained “put everyone in the shit.”

Cancellara, who had been beaten by Schumacher in the time trial at the Tour but took Olympic gold in the discipline – he would also be elevated to second in the road race after the Italian Davide Rebellin tested positive for the same substance – revealed he had been hit hard by the news and, on holiday in the Maldives with his family, went on a three-week eating binge, putting on 10 kilos.

He maintained that the decision to retire had been his alone, noting that this season – one in which he wants to win a final Monument – had some significant milestones such as the 100th edition of the Tour of Flanders, the Tour de France visiting his home city, Bern, and that it was an Olympic year as well as the final one of his contract with Trek-Segafredo.

Looking beyond 2016, he said: “I have projects both in and outside cycling and that will take me forward in the future.

“One thing for certain is that I won’t be a directeur sportif in the team car. I’d like to be involved with a team, but as an advisor not a manager. I’m working with Trek, that’s one of those projects. Whatever it is, I don’t just want to sign autographs.

“I'm ready to start at the bottom of the ladder. You need to learn: if I became a photographer, I would point not at myself and say, ‘I want to shoot the Vogue cover photo’.

“I have 30 years of working life ahead of me and my wife wouldn’t want me to stay at home doing nothing, nor would my children.

“I don’t want to hear them say, ‘Hey Dad, what are you up to? Are you drinking Belgian beer?’ I want to be an example, to build something.”

And as for that certain other item on his post-retirement wishlist?

“One of the first things I will do is buy a motorised bicycle,” he said, “to go to the post office or the shops.”

Mimicking a slope with his hand, he went on: “My home in Ittigen is like this, and now when I’m with my wife on her electric bike, with the little one on the back seat, I’m breathing like an ox while she’s pedalling along, whistling.”

“I’ll buy a motorised bike – but, hey, a town bike, be careful what you write,” he added.

Last weekend, Eurosport aired the first of a six-part series, Follow Fabian, that will focus on Cancellara's final season and which is being screened on TV as well as via the broadcaster's Eurosport Player digital platform.