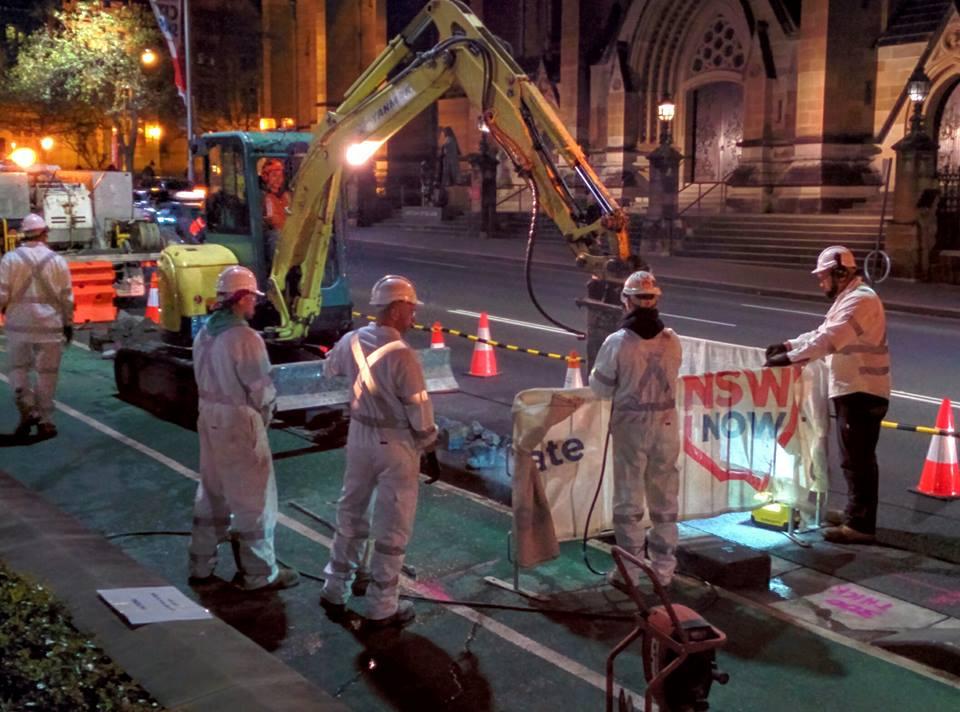 Cyclists in Sydney have staged a mass protest against  work to dismantle a cycle lane in Sydney under what campaigners say are draconian measures by roads minister Duncan Gay to penalise cyclists.

Dozens of riders - including families and commuters - filled each lane of College Street, where workers were recently pictured destroying a cyce lane , two abreast, riding slowly to temporarily claim back College Street.

Sydney Push spokesman Rob Berry told the Sydney Morning Herald: "Our goal is for the NSW government to reconsider these policies so that the rate of cycling can continue to grow," he said.

"Every country in the world encourages cycling. It is supported across the political spectrum. But here we have a government that considers cycling as an intrusion and brings in laws that won't protect the safety of cyclists but discourages them."

The New South Wales minister who describes himself as “the biggest bike lane sceptic in the government” ordered a $5m AUS (£2.5m) segregated bike lane in Sydney to be removed in the summer last year, despite it carrying more cyclists at peak times than the corresponding road.

The College Street cycleway closure by NSW minister for roads, maritime and freight Duncan Gay was protested by campaigners who say it is a loss to Sydney’s central business district.

Cycle campaigner Sue Abbott said: “The cycleway is used so much. It’s a very pleasant ride and is somewhere you can go on a really busy street, and even ride with children in safety. Taking out the lane is appalling.

In 2011 Gay’s department wrote a report that said: “Given that the bi-directional paths do not occupy previous general traffic lanes, no significant delays to other road users arising from the cycleways have occurred.”

The report also said: “The removal of the bicycle path on College Street would have limited benefits for traffic flow if the western lane was then to revert to car use."

Lord Mayor Clover Moore also opposed the plans, saying: “Safe, separated cycleways are essential for fixing congestion in the CBD and protecting people who choose to ride,” she said.

Mr Gay said that he was being “increasingly persuaded” that cyclists need to be licensed and also said he was considering banning bikes from some of Sydney’s roads – both measures that he claimed would improve the safety of riders.

Speaking to 2UE Breakfast, Mr Gay said: “The thing I really need to look at is, if we’re going to put rules in place, and I need to be tougher on car drivers, but I am increasingly persuaded that we need to look at a licence for cyclists.

“It’s not going to worry the ones that are doing the right thing, but the bad ones that are running lights, crossing over, being aggressive, they’re a large part of the statistic,” he went on.

“Before the phones run off the hook, as I know they will, it is a very small section of cyclists that don’t do the right thing. It would be probably under one per cent,” he concluded.

Phil Ayres, the chief executive of Cycling New South Wales, told Guardian Australia that most of its 10,000 members would be “fundamentally against” attempts to require cyclists to be licensed.

“But we are an organisation that’s grown up to understand there are arguments in favour of it and we’d certainly want to be at the table with government to discuss cyclist safety,” he said.

“It’s important to realise though that licensing bike riders won’t stop them from being hit, as has happened so horrifically in recent weeks and months. Licensing isn’t a safety issue – if you magically licensed all bikes overnight, it won’t stop the accidents.”

He acknowledged that cyclists need to follow the laws of the road, but denied that law-breaking riders were a significant issue.

“There is a rogue element in any group of people in the community,” he explained. “We don’t condone any riders not obeying the road rules – everyone has to adhere to them. It’s not OK to roll through a red light.

“But the thing with cyclists is that they aren’t surrounded by tonnes of metal. What would be a fender scrape for a car is the maiming of an individual or a loss of life for a cyclist.”

In November 2009, one of Mr Gay’s predecessors as NSW roads minister, Carl Scully, who served in that capacity from 1996 to 2005, said that cyclists should be banned from the roads.