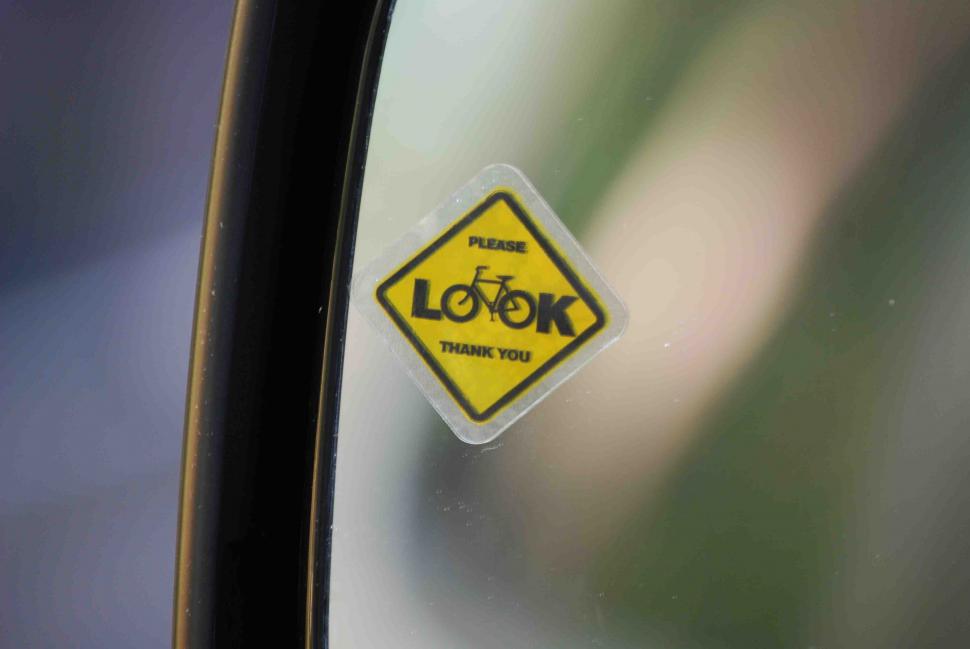 Joe Mizereck, who through his 3feetplease website has successfully fought to have minimum passing distance laws introduced in a number of US states has come up with a new way of keeping cyclists safe on the roads – small stickers that attach to wing mirrors, reminding drivers to look out for cyclists – and is keen to have the concept adopted by transport bosses in London.

However, Transport for London (TfL) has declined his offer of help, citing the initiatives it is currently taking to help improve the safety of cyclists in the city.

The stickers that Joe has designed carry the message “Please Look” together with a graphic depiction of a bicycle, and build on an earlier idea of Joe’s for TfL to deploy road signs bearing the same message at key junctions.

The road safety campaigner, who became concerned about the safety of cyclists in London after reading several reports here on road.cc of incidents involving HGVs that resulted in the deaths of cyclists in London, believes that the signs and stickers could help lorry drivers pay more attention to bicycle traffic.

Joe explained to TfL that the aim of the one-inch square stickers was “to trigger the attention of the lorry drivers to LOOK for cyclists before they make their turn,” and sent samples to the transport authority, together with an offer to “produce the quantities you need, at no cost to London, to place these decals on the side mirrors of all lorries on London’s streets.”

However, in an email that Joe forwarded to road.cc, TfL told him that partly due to “the safety and convenience of pedestrians” and “considerable pressures to avoid street 'clutter',” his proposal to place new signs at junctions “is problematic.”

TfL said that it was “acutely aware of the problem you have identified, and have a number of programmes in hand to address it. For instance, Transport for London has recognised cyclists as vulnerable road users and has run a number of campaigns over the last few years to attempt to highlight this issue.”

TfL also pointed out that it has produced a new Cycling/HGV Safety DVD, and that it is running a year-long campaign including a TV ad, Do The Test, that encourages drivers to be on the lookout for cyclists.

TfL said that it hoped “these measures will provide you some assurance that we are actively addressing the issue.”

As Joe says, “I hope it’s not a case of them thinking ‘why does this guy from the USA care’,” adding “I don’t care where it is in the world, if we can save cyclists’ lives, I’m going to try and do what I can to help. And the troubling number of cyclists being killed by UK lorry drivers has my keen attention.”

Often, it’s the simplest ideas that work the best, and if TfL did take Joe up on his offer, even one cyclist’s life saved would justify the decision.

In the meantime, it’s good to know there’s people like him out there fighting for our safety.