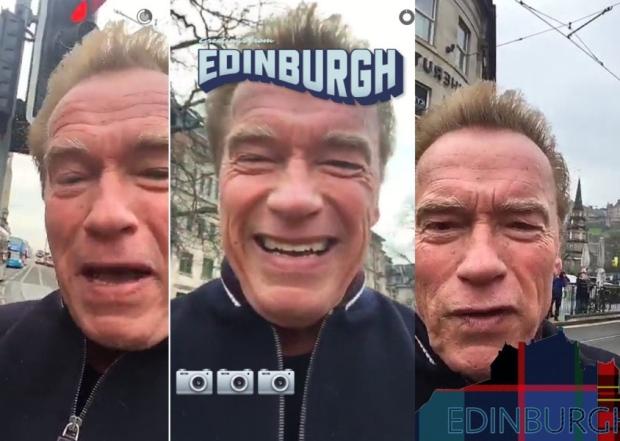 Arnie spotted cycling on wrong side of road in Edinburgh

Arnold Schwarzenegger needs your clothes your boots and your bicycle, but first he may need a copy of the Highway Code
by Laura Laker

Arnold Schwarzenegger has been spotted cycling in Edinburgh on the wrong side of the road headlong into oncoming traffic.

The driver of the number 36 bus must have had the shock of his life when he saw the action hero pedalling towards him on the wrong side of the road.

However, the 68-year-old Terminator star wasn’t doing his own stunts for a movie, he simply appears to have forgotten that we drive – and cycle – on the left in the UK.

Arnold Schwarzenegger off for a bike ride in Edinburgh today

Arnie in Edinburgh: @Schwarzenegger cycles on wrong side of road into oncoming traffic https://t.co/PauSsi67qy https://t.co/Kg2QXtanf8

Arnie was in Edinburgh for last night’s black tie dinner “An audience with…” at the Edinburgh International Conference Centre, and the bike ride was a planned part of his itinerary, as we reported yesterday.

Schwarzenegger recorded the events of his ride on his Snapchat. Clearly impressed with the city, he said: “We’re in Edinburgh, Scotland, riding our bike early in the morning. As you can see, there’s all kinds of activities.

“Look at this beautiful view. Man, look at the castle, everything in the background. Wow, I love biking here in Edinburgh.

“So when you ride around places like Edinburgh, Scotland, you see great sites - look at this castle here, wow!

“The paparazzi were all after me [during his bike ride], and one of them kept up - look at this guy!”

The salmoning superstar can be seen rubbing his eyes sleepily outside the Waldorf Astoria hotel before hopping on a hybrid bike. When asked to turn right by his tour guides he cuts the corner on the right hand side of the road, to the sound of giggling in the background and someone saying “You’re on the wrong side of the road, sir”.

One onlooker told The Scotsman: “He came out of his hotel and went for a bike ride. He was driving on the wrong side of the road. It was dangerous.

“There were two lanes of traffic coming towards him. He was risking his life."

Luckily there was enough time for the bus driver to see him and take evasive action.

Perhaps the plan was to add in some special effects later.