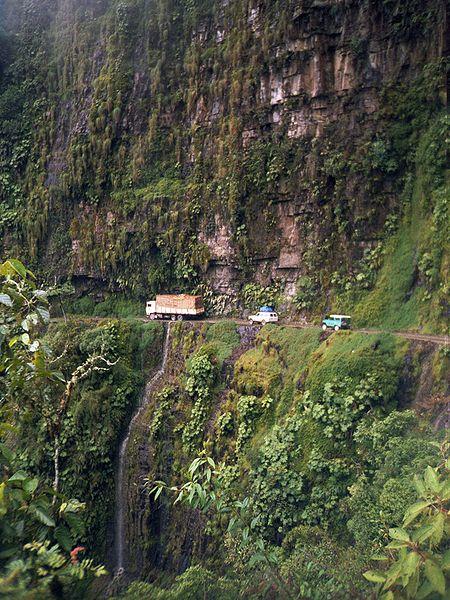 Backpackers travelling through Latin America are taking to two wheels to get an adrenaline rush by tackling what has been nicknamed the ‘Death Road,’ where 18 foreign cyclists have died during the last 12 years.

The unpaved road, which runs from La Paz to Coroico in Bolivia, is bordered on one side by a cliff face rising up into the sky and on the other by a 600-metre drop, last month claimed its latest cycling victim, a female Israeli backpacker. The full circumstances of that accident are unknown.

Despite the obvious risks, the BBC reports that a thriving industry has sprung up to support the backpackers keen to test their nerve on the road, which stretches 40 miles with a descent of 11,800 feet including hairpin bends on what at times is little more than a dirt track.

Since its construction by Paraguayan prisoners of war in the 1930s, thousands of users have been killed on the road, dubbed the "world's most dangerous road" by the Inter-American Development Bank in 1995, which estimated that between 200 and 300 people died there each year. One accident alone, involving a bus in 1983, claimed more than 100 victims.

Just ten feet wide for much of its route, local laws stipulate that uphill traffic has right of way, and while a new paved highway opened in 2006, taking much of the traffic away, it is still used by cars and lorries.

Much like the running of the bulls in Pamplona or bungee jumping off the Kawarau Bridge in Queenstown, New Zealand, the Death Road has become a magnet for thrill-seekers. One, 26-year-old Australian Andrew Jagoo, told the BBC: “If you go to London, you have to see London Bridge and if you go to Sydney you have to see the Opera House. And if you go to Bolivia, you must do the most dangerous road. There's an element of risk but you can say afterwards that you've done it."

Of course, think of any extreme sport, and chances are there’s a Kiwi involved somewhere along the line, and despite the fact we’re talking about Bolivia, this is no exception, with mountain biking tours down the road pioneered in 1998 by a New Zealander, Alistair Matthew, who claims that “the vast majority of the risk can be mitigated by providing people with great bikes and equipment, lots of instruction, and lots of warnings about the potential for accidents.”

But he adds a word of caution, saying "this also means constantly monitoring groups to provide extra warnings to over-excited people and more coaching to less experienced riders."

Matthew decided to offer organised rides after discovering for himself the thrill of riding the route. “The first ride down the world's most dangerous road was spectacular,” he explains. “I went with a British lad, ex-SAS, both of us on horrible old-school bikes with no suspension and cantilever brakes. We finished the ride with big grins and 'claw-hands' from holding on to the brakes."

He set up a company, Gravity, which began by offering group rides to five people at a time. Nowadays, the operation has grown, with 8,500 customers last year alone, according to a report earlier this year on Australia’s Ten News.

Groups are now taken along the road with experienced riders at the front and back of the group and a support vehicle in attendance, complete with emergency equipment. Meanwhile, a host of rival companies have sprung up, and there are now 20 or so offering cycle trips in the area.

While Matthews says that only one person has been killed on a ride organised by Gravity, there is an accident that requires the victim to receive hospital treatment once a fortnight on average.

However, the BBC says that the recent death of the Israeli backpacker had spread quickly around the backpacking community and introduced an extra element of apprehension among those who decided to press on with their plans.

Marte Solberg, from Norway, said: "I was really scared and I was even crying beforehand. A lot of people had said it is so much fun, but I was scared of falling over and dying, like the Israeli girl. I was worried about my own judgement because I have no experience of mountain biking. One mistake and you are dead.

"I asked myself a thousand times 'Why am I doing this?' The answer is that firstly, everyone is doing it. If you come to Bolivia, you have to cycle down the most dangerous road in the world. And secondly, it's a personal challenge."

That element of “personal challenge” was echoed by a British backpacker, 28-year-old Catherine Pearson from Manchester, who said: "If a truck comes along and you go over a stone the wrong way, you don't know what could happen. Sometimes while I was cycling, I was thinking 'I'm going too fast, I need to brake' and then I braked and I thought 'I'm braking too hard and might tip over.'

"It's a personal challenge and you are scared but it's a balance between the two. You have to beat your fear."

Referring to the Israeli tourist’s accident, however, she said: "Hearing about the death had an impact on us. For a start, it made me pay extra attention. And you would feel guilty if you started bragging about surviving."