Latest generation aero road bike from with Dura Ace and £2,799.99 price tag slips into the office
by David Arthur @davearthur

We went up to London at the end of last year to have a look at Boardman's new Elite range for 2016 and now we have the first of the new bikes in for test: an Elite Air 9.2.

In terms of the AIR range, the 9.2 is only one rung off the bottom, with the bikes topping out at a eye-watering £8,499.99 for the signature model. But the 9.2 is certainly race ready: you get Dura-Ace shifters and mechs, a carbon FSA chainset and Boardman's own wheels in the £2,799.99 package. 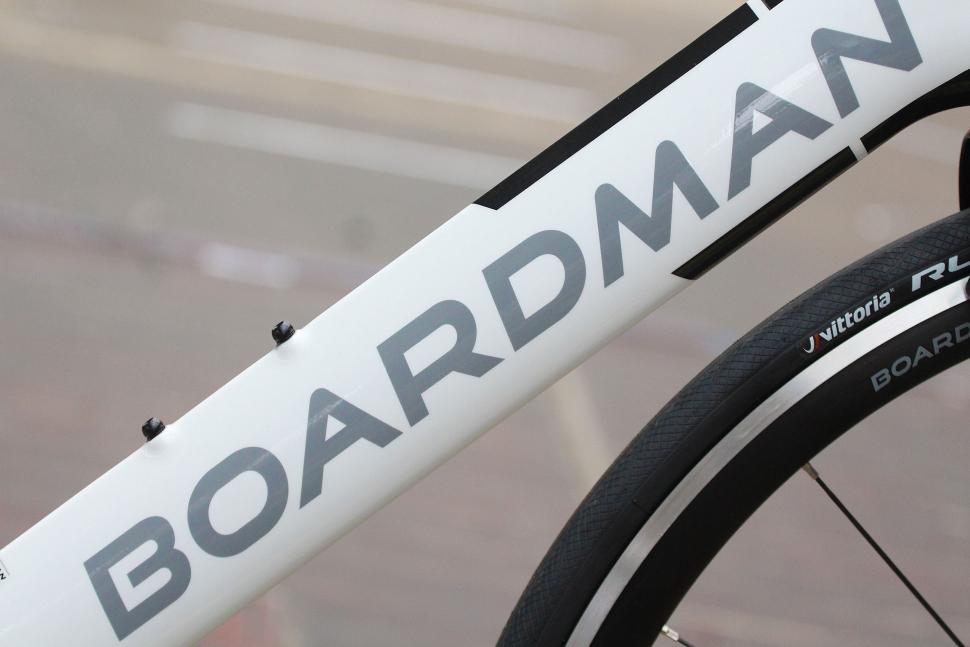 One look at the AIR tells you it's designed to be as aerodynamic as possible. "Through the extensive use of cutting-edge Computational Fluid Dynamics and Wind Tunnel testing, the AIR frameset has been honed to offer a performance advantage across a wider degree of yaw angles than other manufacturers," Boardman say.

"This means that the AIR will out perform the competition in the real world, no matter where or when you ride". 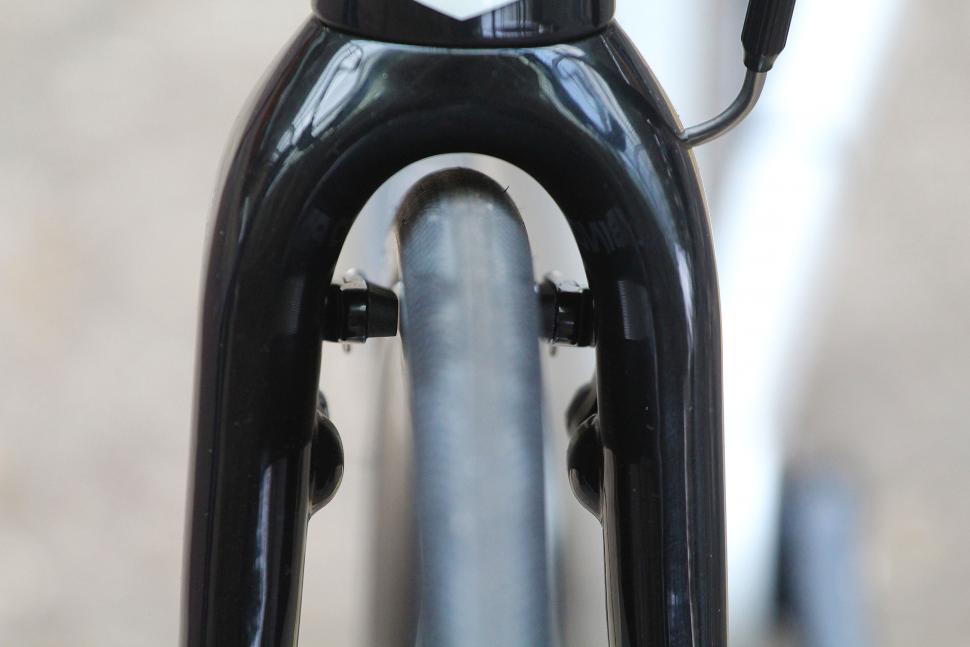 Bold claims indeed. Up until now Boardman have had to rely on other people's facilities for testing but that won't be the case for long: they're busy getting their Performance Centre up and running in the midlands, which will contain, they say, the most accurate bike-specific wind tunnel in the world. It's likely to open sometime in the autumn.

So you get deep and narrow tube profiles on the frame and fork, an aero seatpost, fully internal cable routing (with the cables entering the frame behind the steerer), a front brake integrated into the fork, and a rear brake positioned under the bottom bracket. All this is designed to make the AIR as slippery as possible. 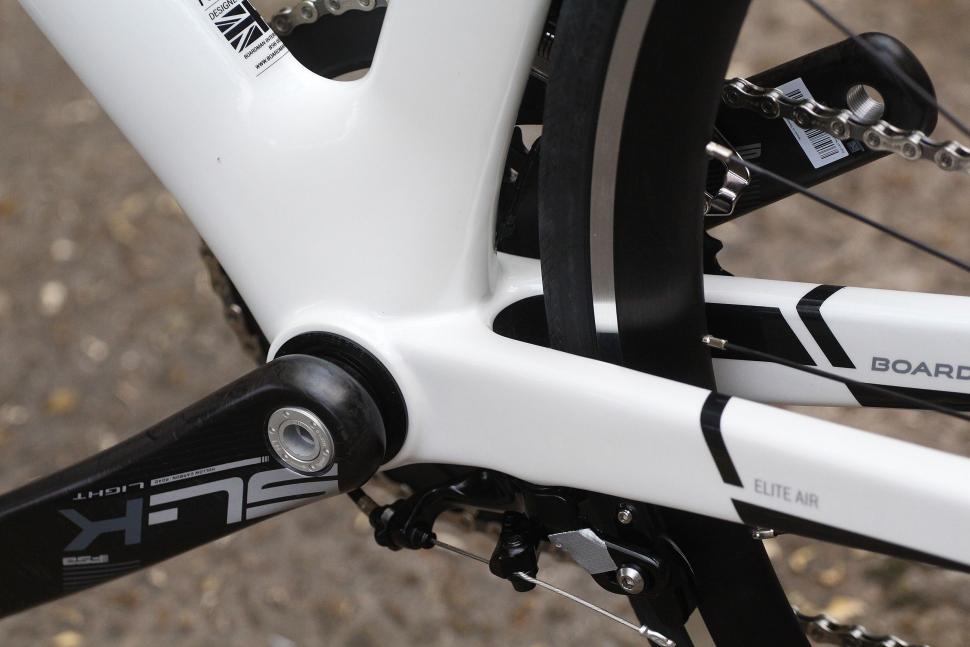 The C10 frame is used for all the Elite AIR bikes from the 9.0 right up to the signature model. In the past Boardman have split the range with a cheaper layup in the lower models, but that's not the case anymore. It's clearly aero-optimised but at the same time it has fairly classic road bike lines; for instance, the seatstays are a wishbone design to keep surface area to a minimum, but they're not dropped down the seatpost like many new-generation aero frames. Similarly, the seat tube is flattened but the back wheel isn't cut into the tube. 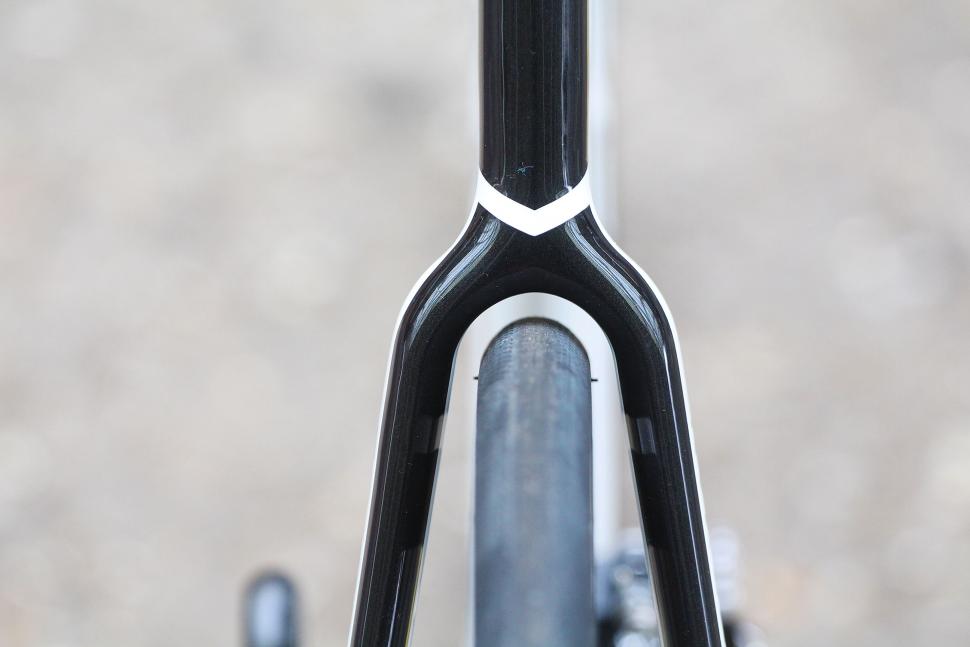 Boardman is keen to point out that they've not been concentrating only on aerodynamics with no thought to how the bike will ride. "Careful consideration was taken during the design phase to ensure that in our pursuit of aero, we didn’t destroy the handling, stiffness or comfort as it needs to be as enjoyable to ride as it is fast", they say. So like the top-end race frame, the SLR, the AIR uses a one-piece bottom bracket and chainstay design to make power transfer as efficient as possible, and the fork uses a 1.5" bottom race to add stiffness to the front end. 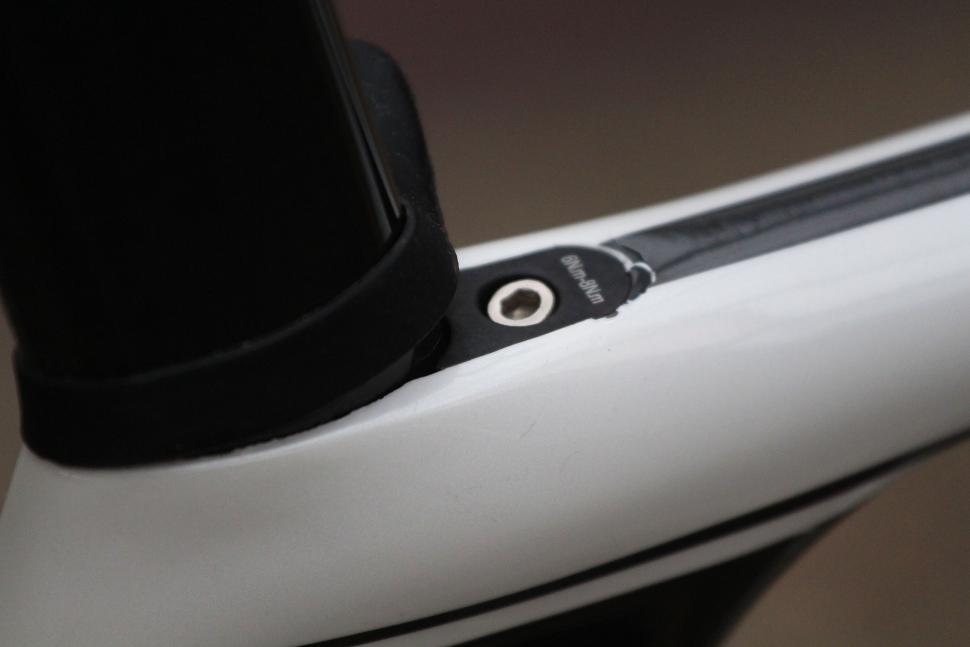 The fork is very interesting: it's Boardman's T8 fork, which is the one they used on their top-end bikes on the last incarnation. They now have a new fork, the T9, which is used on the AIR 9.4 and upwards for 2016, which uses Aero Surface Trip technology on the for's surface to further reduce drag. The T8 is still a pretty advanced unit, though, incorporating the brakes within the fork legs to maximise aerodynamic efficiency. 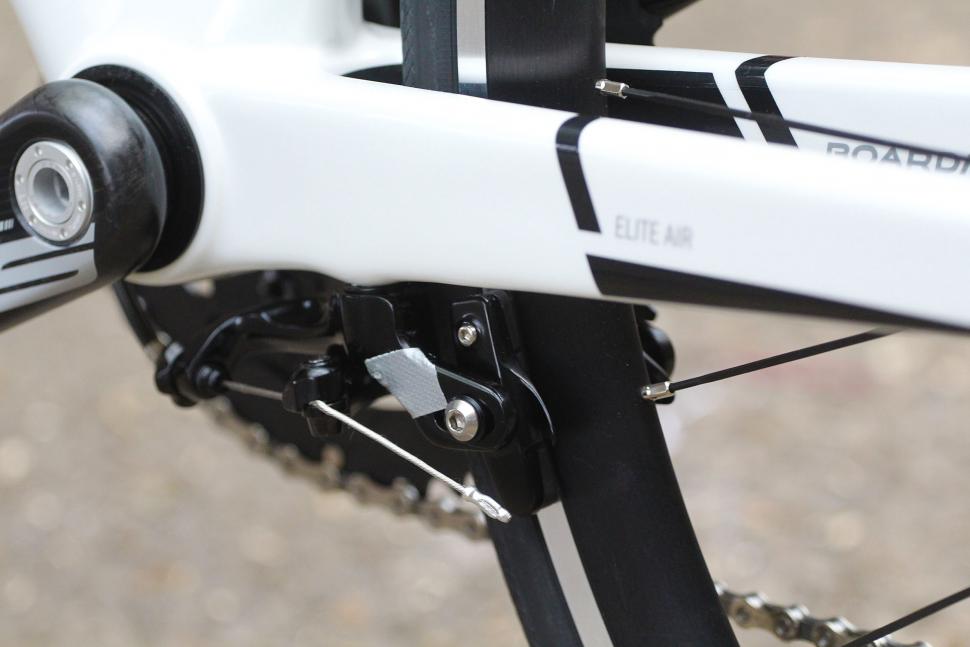 Boardman make a TT-specific bike, the ATT, but they're obviously aware that the AIR will also get pressed into service at time trials and triathlons; The Brownlee brothers have used previous AIR bikes in competition at the very highest level. To that end, the seatpost has a series of mounting positions for the saddle, which effectively allow you to slacken or tighten the seat angle of the bike depending on what you're using it for. 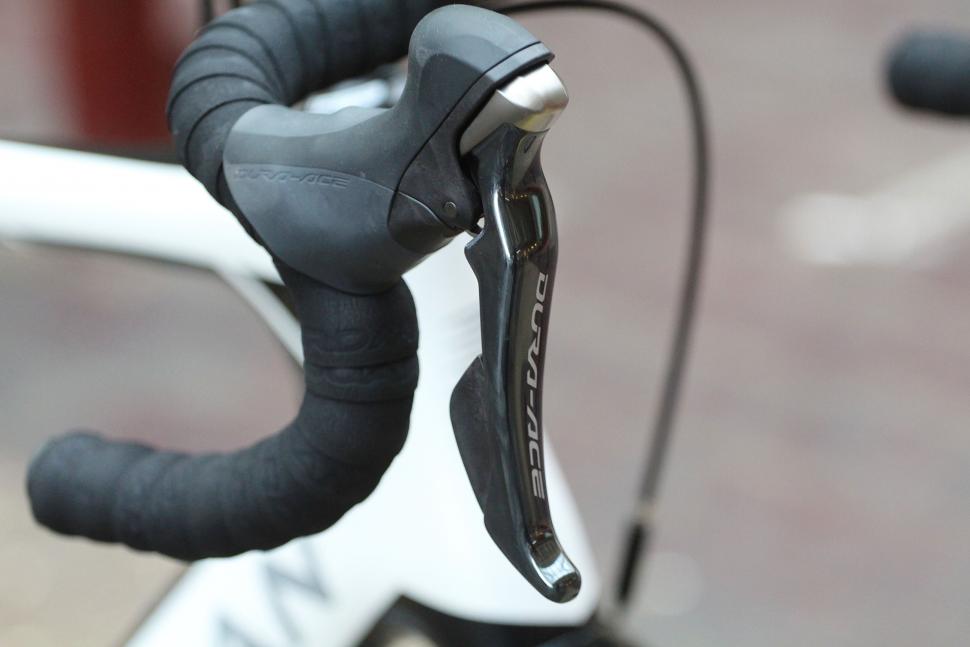 Dura-Ace transmission components, from Shimano's top-end mechanical groupset, take care of shifting. FSA supply the 52/36 SL-K chainset, and at the back there's a Shimano 105 12-25 close ratio cassette; again, that's a nod to against-the-clock riding while still giving a big enough spread of gears for more general use. Brake callipers are made by Tektro: there's the integrated linear-pull front brake in the fork, and a direct-mount Tektro calliper under the bottom bracket. 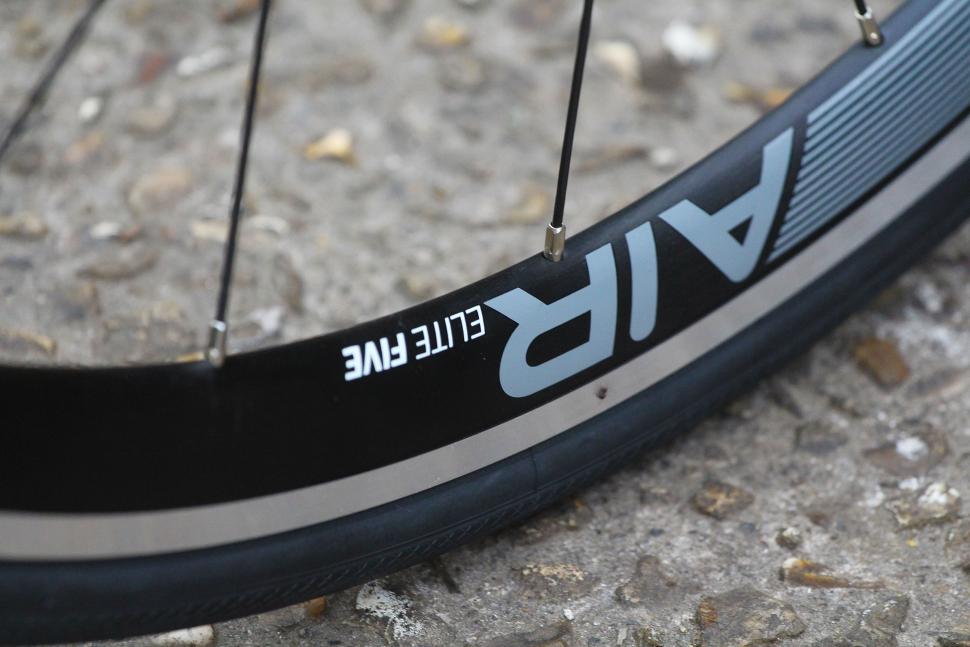 Boardman has their own range of wheels for 2016, going up to the£1,099 Elite Nine carbon, with an 80mm rear and 55mm front. The Elite Fives are a 35mm aero-profile alloy clincher with bladed spokes and straight-pull hubs. Boardman also supplies the alloy stem and bars, and the bike is finished off with Vittoria Rubino Pro 25mm tyres and a Prologo Nago Evo saddle. 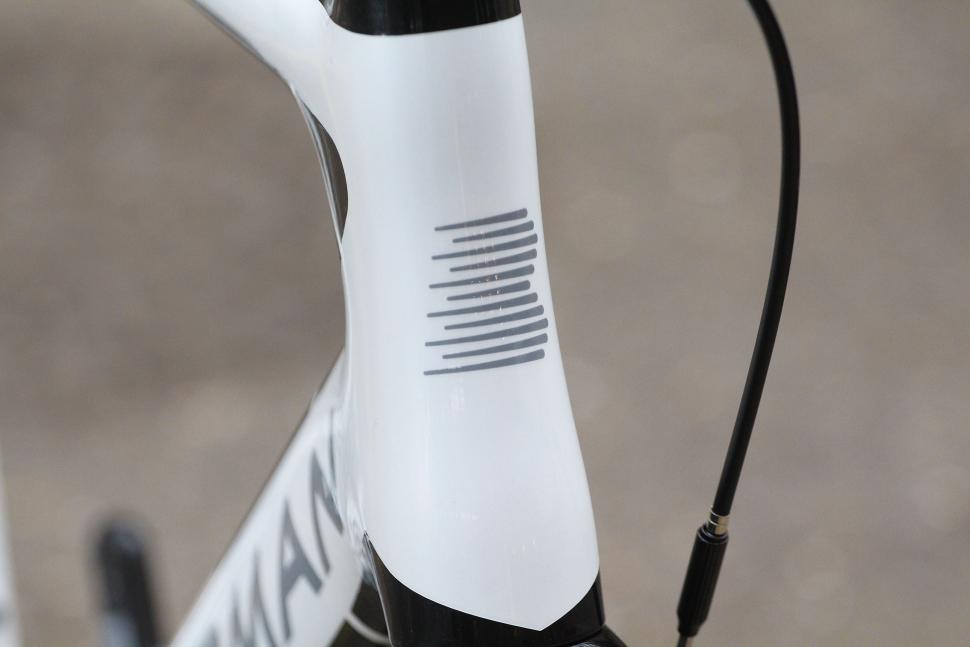 Our XL test bike weighs in at 7.97kg (17.57lb), which is almost exactly what Boardman say a medium bike should weigh, so, in reality, they're probably a bit lighter than stated. That's not super-light for a Dura-Ace-equipped bike but if aero really is more important than light then this should be a quick machine. Only one way to find out and that's to give it some road miles. We'll report back soon! 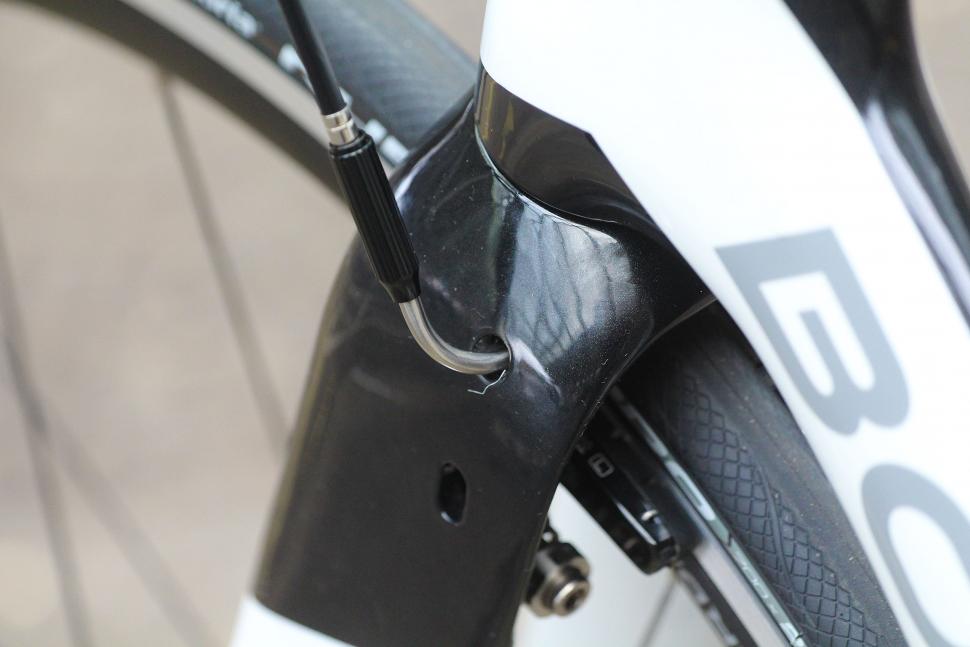 What can we compare the Boardman too?  On test at the moment is the Merida Scultura 6000 (£2,300) which isn't a pure aero road bike but still mixes in some aerodynamic features. Also recently tested, and these are both proper aero road bikes, is the Trek Madone 9 (£9,750 in the top build we tested, but available at lower prices) and the Canyon Aeroad CF SLX 7.0 Di2.