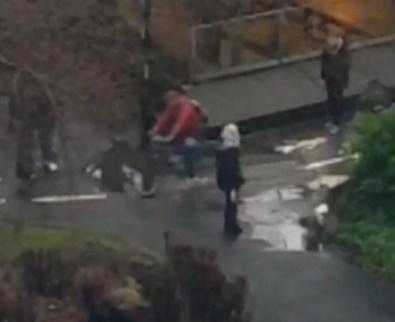 As ever, it’s better to be on a bike
by Alex Bowden

Who says that the nation’s workers will leap on anything to distract them during January? Today, tens of thousands of people tuned in to watch locals trying to cross a large puddle on a shared-use path in Newcastle.

The Telegraph described it as “quite addictive.” The Guardian suggested it “may be the best use of Periscope yet.” The former also went so far as to put together a highlights package.

Staff at marketing agency Drummond Central have been watching people tackle the puddle from a window in the top floor of their building for several weeks now. Copywriter Steve Wilkes suggested they set up an iPhone and live stream it for the day. At times, they have had over 20,000 people viewing the footage.

Force all cyclists to use cycle lanes says Mr Loophole

“I think everybody’s enjoying the various different techniques employed by people in getting over the puddle,” said Richard Rippon, whose iPhone is being employed to capture the footage. “A lot of people in the office had it up on the screens and it became more and more addictive so we just let it run and run. People have it up on their screens as if it’s a big sporting event. It’s brilliant, I feel great.”

From what we saw, cycling does present an advantage with most people on bikes simply ploughing straight through, unconcerned by the horrendous wet foot threat that is haunting pedestrians. Those on foot are generally either edging round the side or attempting to jump the puddle.

“The depth of the puddle varies,” said Rippon. “It's quite deceptive."

One man brought a lilo. Another brought a surfboard.

It’s not that deep.

When road.cc last checked in, night was falling and a big booming voice intoned: “Right, everybody get back to their life now. Nothing to see here.”